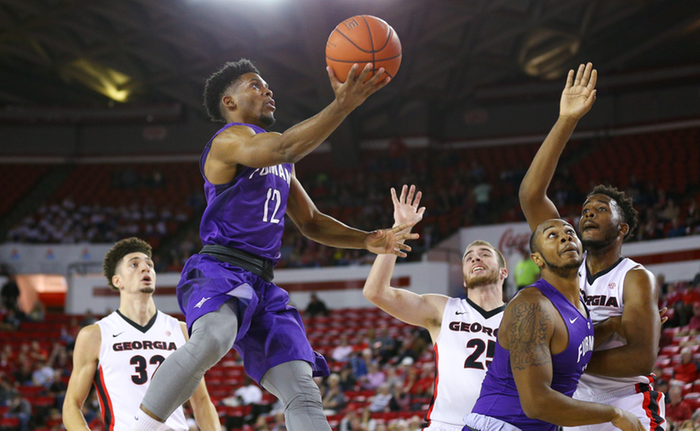 After playing the two easiest games on its schedule, Michigan will need to regroup and focus against a Furman team that is a level up.

After playing the two easiest games on its schedule, Michigan will need to regroup and focus against a Furman team that is a level up.

The Paladins haven’t been great this season, entering tonight’s game with a 7-5 record, but they’ve shown potential. Their five losses have come by a combined 17 points and they haven’t lost a game by more than two baskets. Their best win is over 116th ranked UAB and they have losses to Presbyterian and South Carolina State, but they were also competitive on the road at a very good Georgia team.

In the end this is a competitive team in the Southern Conference, and a game that Michigan should handle, but it won’t be the same sort of easy win as we saw over the last week.

Furman’s recipe for success starts at the three-point line. 44% of the Paladins’ shot attempts are threes (33rd nationally) and they shoot 38.2% (63rd) on those attempts.  Their opponents also attempt a lot of threes (40% of FGA), but struggle to make them (30.5%).

While the Paladins are a great perimeter shooting team, they don’t have many other offensive strengths. Furman ranks 238th or worse in turnover rate (20.3%), offensive rebounding percentage (25.2%) and free throw rate (32.2%). The Paladins score 39.5% of their points from the three-point line, the 22nd highest rate in the country (7 spots behind Michigan).

Furman plays almost entirely man-to-man defense and its strength is its ability to clean up the defensive glass. Paladin opponents rebound only 24.8% of their misses despite Furman ranking only 325th in height. That lack of height manifests itself inside where teams shoot 49.2% inside the arc against Furman, which ranks 322nd in block rate. Furman is above-average at creating turnovers as its opponents cough up the ball on 19.8% of their offensive possessions.

6-foot-2 guard Devin Sibley has been a knock down three-point shooter (48%), but he’s also a plus-slasher. The junior guard touts a 52.3% free throw rate (FTA/FGA), but makes just 65% of his freebies. He’s also been a bit turnover prone, but provides an important lift on the defensive glass despite standing just 6-foot-2.

6-foot-4 junior Daniel Fowler handles the point guard duties and he’s a great distributor who can get in the lane and score, but also doesn’t turn it over. Fowler shoots 57% inside the arc (where he attempts over half of his shots), but his reliable out to three (36%).

Furman doesn’t boast a lot of size inside as 6-foot-7 junior Geoff Beans is the tallest starter. Beans, a Toledo native, has made just 5-of-13 shot attempts inside the arc. While he’s not a traditional big man, he is a perimeter shooting threat. Beans has attempted almost 4 times as many threes as twos and is a 38% shooter from deep.

6-foot-6 senior Kris Acox might lack size, but he also plays an important role in the Paladin frontcourt. Acox is the leading offensive and defensive rebounder on the roster and the only player who isn’t a threat to shoot from three-point range.

6-foot-8 sophomore Matt Rafferty is a more traditional big man off the bench. He’s Furman’s best shot blocker, a plus-offensive rebounder and makes 56% of his twos. He’s actually the team-leader in steal rate as well.

Furman has been competitive in every game its played this season, but it also hasn’t faced a team as good as Michigan. The Wolverines should have to work harder than in their last two games, but KenPom still projects a 70-55 Wolverine victory.