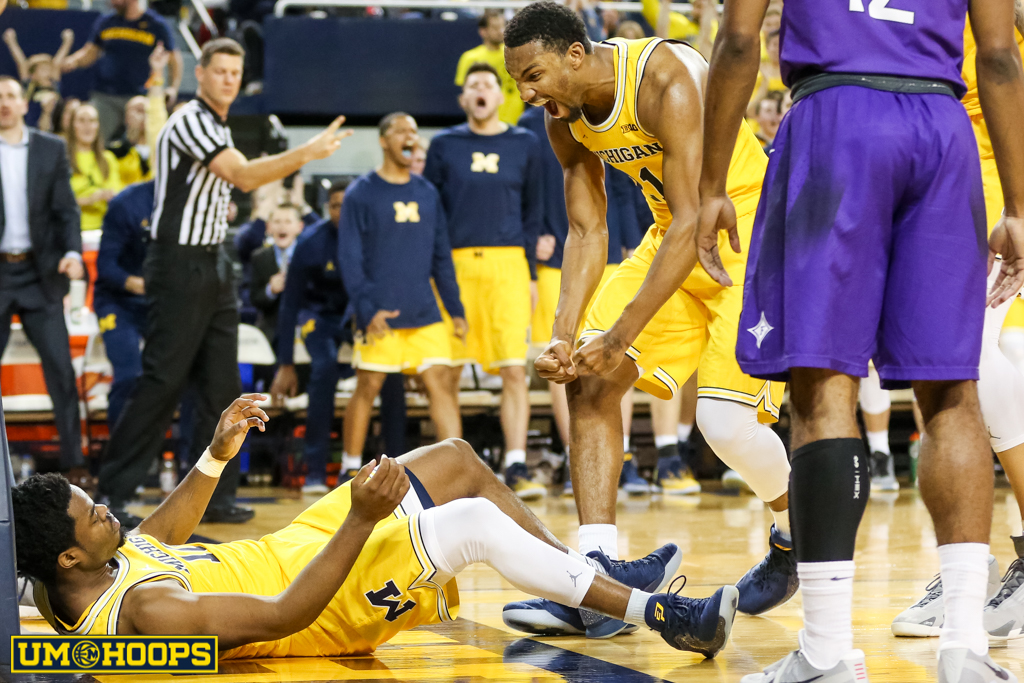 There’s no denying what Derrick Walton and Zak Irvin mean to this team and they showed it last night.

He’s moving out of the frame, but try to watch Zak Irvin. There are 25 seconds left and Michigan is clinging to a three-point lead against Furman. Irvin passes to fellow senior Derrick Walton on the left wing with five on the shot clock and starts backpedaling. As soon as Walton releases the shot, Irvin raises an arm in the air in anticipation.

“He made a shot like that earlier in the first half,” Irvin said, referring to a Walton three from the same spot on the other side of the court. In both instances, Walton received a pass with the shot clock winding down and the 6’8″ Matt Rafferty on him. He jabbed with his right foot to create space and then buried the shot.

“Especially when it’s crunch time,” Irvin continued, “I know what he’s capable of. Right when I passed it to him I started running back because I knew it was good. I knew he was going to make it.”

That’s the type of confidence that, on this team, at this time, only Irvin has. Moritz Wagner is getting there, according to John Beilein, but the coach wants more from everyone.

“We have to have a mindset that when things aren’t going well, we still have to be confident,” Beilein said. “We have to play with faith in our ability and not fear…There are sometimes I’ve got to put my arm around people and tell them how good they are. We have to really grow in that area.”

Beilein wants his players to have a “next play” mentality and move on from setbacks. Walton—a player who needs to be reminded of his career stats—showed some of that last night against Furman. He hadn’t been playing poorly, but wasn’t on his ‘A’ game, as Beilein put it. Plus, Michigan as a team was ice cold from deep when he took the aforementioned triple. The Wolverines had made three of their first seven long-range attempts and then missed 12 straight, including every second-half attempt, until Walton’s dagger.

Irvin had taken the previous four shots for Michigan, all mid-range jumpers off the dribble, and made the two that were directly off of a ball screen and missed the two against the Furman switch.  Irvin wants the ball in his hands in those moments and he typically reads the defense well. He had seven assists (and just one turnover) against Furman, often finding bigs rolling to the bucket.

Irvin also wants the challenge of guarding the opposing team’s best player, assuming the positional matchup makes sense. On Furman’s final two possessions, not counting the meaningless shot before the buzzer, Irvin played a big part in getting stops. With Michigan up three, it was Irvin’s man who drove and eventually stepped out of bounds. Coming out of a timeout after Walton’s three, Irvin denied his man the ball and blew up Furman’s play.

“He’s done a great job defensively,” Beilein said of Irvin heading into the UCLA game. “If we had one stop to get, he’d be a primary candidate, especially out on the perimeter.”

Walton and Irvin, of course, are going to be critical for Michigan all season. While Beilein would love for Walton to have Irvin’s confidence—and some of his vocal energy as well—he’s grateful for the overall attitude of his team, which stems from the senior captains.

“I think we’ve got a group of guys that have no agendas except to win,” Beilein said last night. “Nobody you could say, ‘He’s in an NBA tryout every day’ or ‘He’s a malcontent because he’s not getting enough shots.’ We have a connected, connected team of good kids that just need a little bit more grit. Hopefully we got some of that today.”