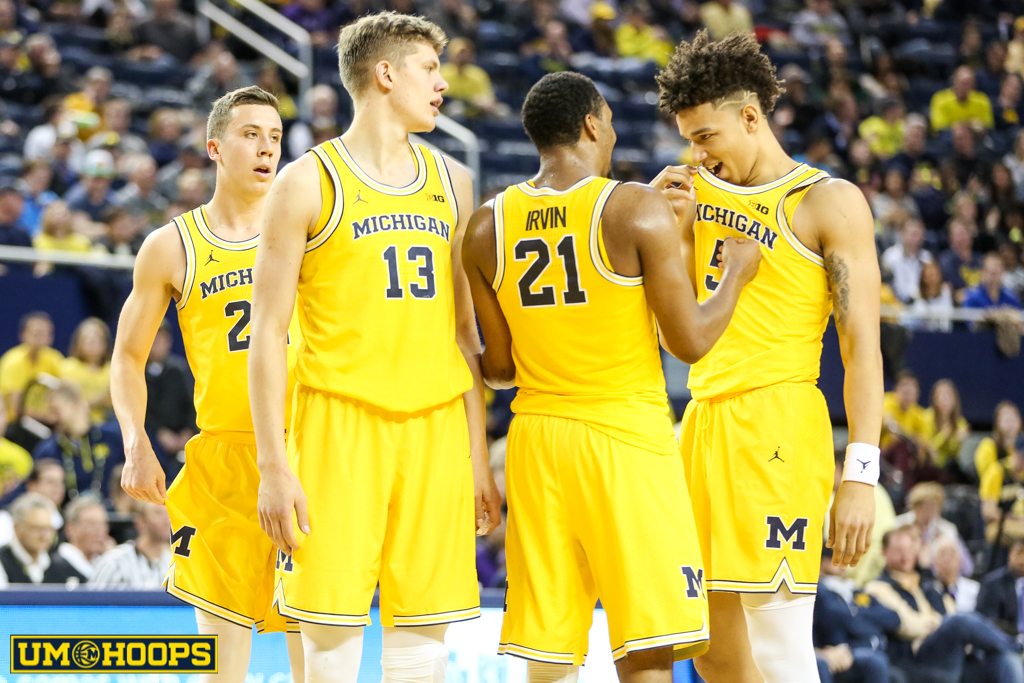 Michigan has two good wins and no terrible losses, but it also arguably lost the three most difficult games on the schedule. The Wolverines were close to making some sort of an A grade, but the home loss against Virginia Tech turned what could have been a great non-conference performance into just a very good one. There’s no shame in losing at South Carolina or at UCLA, and neutral court wins over SMU and Marquette are impressive, but a home loss to Virginia Tech after holding a double-digit lead is hard to shake.

Michigan’s offense is doing what you’d expect from a good John Beilein offense. The Wolverines are ranked in the top-25 nationally in eFG% (55.8%) and turnover rate (15%).  They are shooting 55% on two-point attempts (32nd) and 37.9% on threes (68th) while firing up a bunch of threes. 46.5% of Michigan’s shot attempts have been threes, the 13th highest rate in the country. Those numbers are all about on par with what we’d expect, as are the low offensive rebounding and free throw rate metrics.

The recipe hasn’t changed significantly, but has added to wrinkle of a versatile big man in Moritz Wagner, and it has worked for the most part. Michigan’s offense has been terrific in all but two games — the win over Texas and loss at South Carolina — and that’s encouraging heading into league play.

The defense is better, but it’s still too early to determine just how much better. It’s hard to judge the overall adjusted efficiency numbers before conference play, but they are improved. Right now Michigan ranks 67th in adjusted defensive efficiency, up from 95th last season. That feels like a step in the right direction, but will it persist in league play?

Tracking some of the individual stats is a bit more interesting. Michigan has been forcing more turnovers this year while its eFG% defense has improved by a couple percentage points. The offensive rebounding and defensive free throw rate have stayed roughly the same. The biggest differences are in the two-point and three-point shooting splits. Last year, teams attempted 36.4% of their shot attempts from three-point range against the Wolverines. This year, they’ve attempted on 29.3% (19th), but they are making more at 37.9%.

Ken Pomeroy has written extensively about the idea that ‘three-point defense’ should be measured by how many threes allowed rather than how many go in. On that note, the Wolverines should be due to see some positive regression toward the mean in their three-point defense.

Zak Irvin’s grade might raise some eyeballs, but the 6-foot-6 senior has been more consistent in the non-conference season and has improved statistically across the board. Right now, he’s on target to match career highs in 2-point shooting (51%), assist rate (21.8%) and defensive rebounding rate (16.4%).

As you can see from his shot chart, he’s getting to the rim fairly effectively and he’s also developing some sweet spots. The oft-maligned mid-range jumper has actually been a good shot for Zak Irvin when he’s dribbling toward the right elbow, or along the left baseline. He’s also been a reliable catch-and-shoot jump shooter on three-pointers from the left.

Michigan needs a lot from Irvin, but at this point they are getting it more often than not. Does he still take some questionable shots, telegraph the occasional pass or dribble himself into trouble? Sure. But he’s also been very productive on a fairly consistent basis. Irvin, like Michigan, as really only had two bad games out of 13.

Walton hasn’t necessarily been a disappointment, but he’s been the same player that we’ve seen for the last couple of seasons. He’s a great three-point shooter (41%), but he’s still struggling to create any offense inside the arc. He’s made just 38% of his twos (and that’s after a 5-of-6 stretch over the last three games) and is 2-of-13 inside the arc in top-100 games.

He’s still a very unique player who can rebound better than just about any 6-foot guard in the country. He gives Michigan a lot defensively and can run the offense, but he hasn’t taken the next step as a playmaker in the halfcourt and has seemed hesitant to push the ball in transition.

Before the season I wrote that Wagner was the biggest x-factor in the rotation. If one player would elevate Michigan to another level this year, it would be the 6-foot-10 German. Through 13 games, he’s shown us the merit in that line of thinking, while constantly reminding that there’s more room for development.

Wagner is the most efficient player in the Big Ten who has used at least 24% of his team’s offensive possessions. He’s shooting 71% on two-point attempts and has made 15-of-30 three-point attempts. He’s also proven that he’s capable of getting the free throw line reliably via his ability to take bigger defenders off the bounce.

The biggest key for Wagner is to reliably stay on the floor. Right now, he’s making progress in that department. His defense has improved leaps and bounds from November and he’s played 20 minutes or more in 4 of the last 6 games after only topping 20 minutes once in the first 7.

The DJ Wilson break out was the one storyline that I never saw coming. Wilson hadn’t really shown any signs of developing into the sort of player over the first two years of his career, but now here we are.

Wilson has clearly given Michigan a new defensive element. He’s a top-10 shot blocker and a top-10 defensive rebounder in the Big Ten. He’s basically eliminated the significant size disadvantages that Michigan has faced at the four position over the last few years, while allowing Zak Irvin to not bang against bigger and stronger players for five months.

Offensively, Wilson is still a bit of a work in progress, but he’s giving Michigan enough at the four spot to keep the offense moving. Wilson has predominantly been a finisher around the rim, something he’s done well, but he’s proven that he can also stick the occasional three (36%). The next step in his development is the in between game and playing with his back to the basket in the post.

Robinson struggled out of the gates and took time to adjust to his new role coming off of the bench, but he’s been finding his niche of late. The designated shooter is at 40% from three-point range, which is 5% under last year’s mark and well below his prolific early-season pace from 2015-16. But Robinson has also shown a bit more versatility in his game and he’s handed out 11 assists over the last 4 games.

Donnal has come off of the bench this season, but he’s been efficient and reliable on both ends of the floor. When Wagner has struggled with foul trouble or defensively, Donnal has stepped in and provided solid minutes. He still has the best connection with Zak Irvin off of the pick-and-roll and he’s been lethally efficient. Donnal currently has the 7th best offensive rating in the country at 141.5 points per 100 possessions. He’s shooting 68% on twos, 4-of-8 on threes, and has done a good job on the offensive glass.

There were moments late last season when Muhammad-Ali Abdur-Rahkman looked to be on the verge of becoming a featured piece of Michigan’s offense. He’s still one of the best isolation drivers on the team, but he’s struggling to finish at the rim while attempting more threes. Last year two-thirds of his shot attempts were twos, this year he’s down to a 50-50 split. He’s also shooting just 44% on twos (down from 51%) and 30% on threes (down from 36%).

Simpson has played in every game, but has struggled to live up to the high expectations for his freshman season. He’s only taken 13 shots in 13 games (making four) and has played very limited minutes overall. He’s shown some flashes of figuring things out in recent weeks, but the game continues to move a bit too fast for him.

The hope was that Watson could be a designated shooter off the bench, but the 6-foot-5 guard is just 1-of-15 from three-point range on the season. He’s 8-of-9 inside the arc, showing some ability to run the floor and slash, but right now it’s hard to justify playing him over Michigan’s other wing options.

Teske’s biggest problem is that he’s only played 38 minutes this season. The 7-footer has shown promise, but he doesn’t have the offensive skill that Wagner has or the experience that Donnal has.