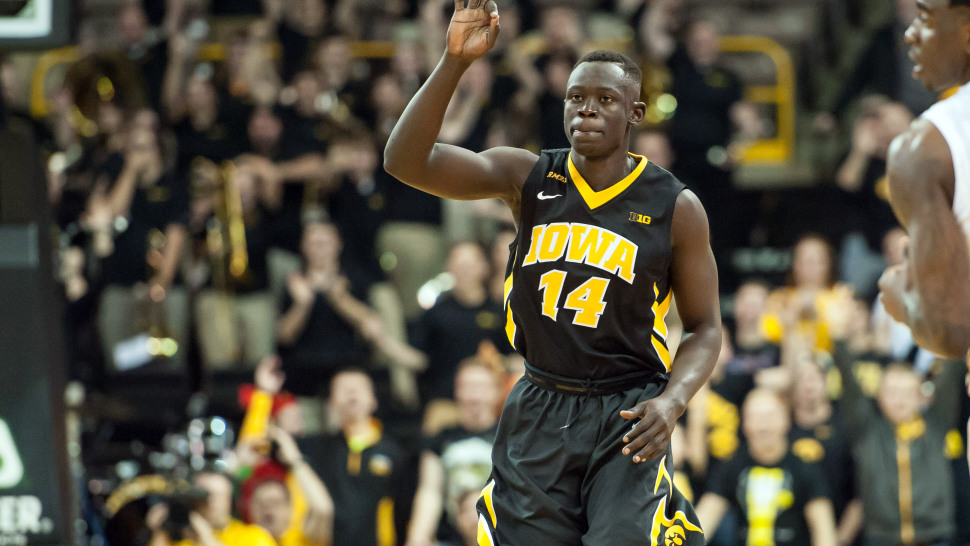 Michigan heads to Iowa City on Sunday to open the Big Ten season against the Hawkeyes (8-6).

Michigan heads to Iowa City on Sunday to open the Big Ten season against the Hawkeyes (8-6).

Iowa started the season slowly, dropping 5 of its first 8 games, including four straight games in which its defense surrendered 1.2 points per possession or worse. But December 3rd loss to Nebraska Omaha at home, Iowa appeared to right the ship and won 5 straight games while holding its opponents — including Iowa State — under a point per possession.

Big Ten play hasn’t been as forgiving as the Hawkeyes opened the year in West Lafayette and were blitzed by Purdue in a 22 point loss. Despite its up-and-down season, Iowa still has some talent including 6-foot-6 senior Peter Jok, arguably the best scorer in the conference and a candidate for player of the year.

Offensively, Iowa tries to push the ball as much as possible and lead the Big Ten in percentage of offensive possessions in transition at 21.7%, but only Michigan State has been less efficient when it pushes the ball than Iowa. The Hawkeyes shoot 52.3% on twos (75th) and 36.3% on threes (115th) for a 53.1 eFG% (70th). They are clearly capable of putting up points given their shooting ability and pace. They are just average in the other four factors, ranking between 105th and 165th in turnover rate, offensive rebounding percentage and free throw rate.

When Iowa’s defense struggled, it looks like it was the case of teams getting and making open shots. Iowa’s eFG% defense is solid overall (48.2%), but teams were routinely in the high 50s and 60s during the Hawkeyes’ slump. Defending the three (35.1%) has been a weakness for Iowa, but it has been better inside, only allowing a 45.7% two-point shooting. The Hawkeyes will play zone about once every five possessions. They also have an above average ball screen defense despite having a defense that has struggled this season.

6-foot-6 senior Peter Jok should be first, second and third on Michigan’s scouting report. He’s averaging 21.9 points per game while shooting 48% on twos and 40% on threes. Jok was a great scorer with a great supporting cast last season, now he’s a great scorer that has to do it all. He’s great shooting the ball coming off of screens and is terrific in the ball screen game as well.

6-foot-9 freshman Tyler Cook missed 7 games with a broken bone in his shooting hand, but returned to the rotation against Purdue. Cook averages 13 points and 5 rebounds per game when in the lineup, He’s a great scorer around the basket (62% inside the arc), and he’s also a solid offensive rebounder and Iowa’s leading scorer in post-up possessions.

Fellow freshman Cordell Pemsl has also played very well for the Hawkeyes. Standing 6-foot-8, 249 pounds, Pemsl is averaging 10 points and five boards per game. He’s a plus rebounder on both ends of the floor and a good shot blocker. He shoots 73% on twos and draws 6.5 fouls per 40 minutes.

6-foot freshman Jordan Bohannon starts at the point guard spot. Bohannon leads the team in assist rate, but has been turnover prone. He’s shooting only 24% inside the arc (9-of-37), but is a competent three-point shooter. He’s attempted more than twice as many threes as twos and is 28-of-78 from long distance (36%).

Sophomore wing Nicholas Baer had a promising freshman season and has continued to shoot the ball well. He’s played more minutes this year, but still has been very good on the glass, blocking shots and picking up steals while making 56% of his twos and 30% of his threes.

6-foot-7 sophomore Ahmad Wagner has started since Cook’s original injury. He brings more length and shot blocking ability to the table. He’s an interior player who does a the majority of his work around the basket and does a great job of drawing fouls.

Junior forward Dom Uhl hit a couple of big threes in Michigan’s last trip to Iowa City.Uhl has struggled with his three-point shot this year (5-of-24) after making half of his threes in Big Ten play last year. He’s another guy that tries to get to the free throw line, but is making just 46% of his twos and turning the ball over on a quarter of his possessions.

Michigan hasn’t won in Iowa City since 2010-11 (in overtime) and even against a down Iowa team, it’ll be difficult to escape Carver-Hawkeye with a win. KenPom projects a 73-71 Michigan victory, giving the Wolverines a 57% shot at opening the Big Ten season with a road win.