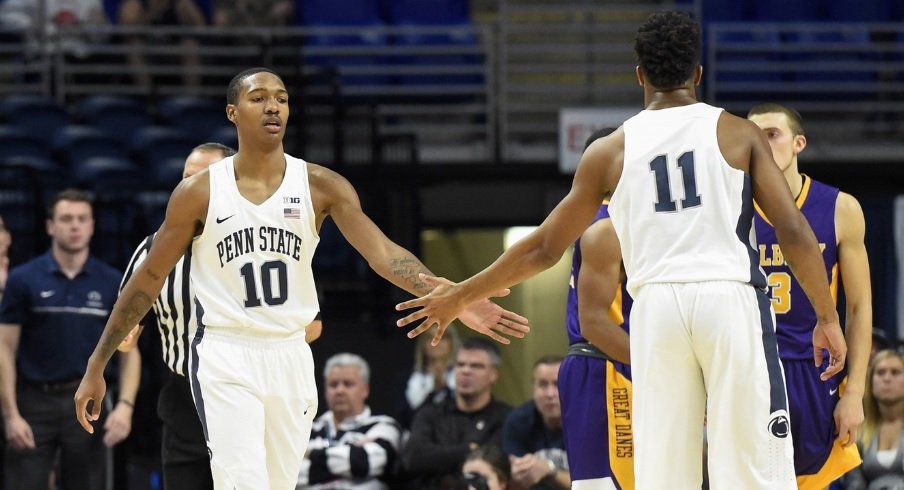 Michigan will look to bounce back from its disappointing Big Ten opener as it welcomes Penn State to the Crisler Center tonight.

Michigan will look to bounce back from its disappointing Big Ten opener as it welcomes Penn State to the Crisler Center tonight.

The Nittany Lions opened the year with a home loss to Albany, but scrapped their way to an 8-5 non-conference record. They lost their Big Ten opener in a high scoring affair to Northwestern at home, before going to Rutgers and winning an ugly 72 possession game at Rutgers that finished 60-47.

Penn State under Pat Chambers has had a pretty distinct modus operandi. They are going to play hard, have a few guys that can get to the rim and be better on the defense than offense while playing at a grind-it-out tempo.

That recipe hasn’t been good enough to get the Nittany Lions into the tournament and this year we’ve seen one significant shift. Penn State plays uptempo basketball now. The Nittany Lions are averaging 74 possessions per game (28th nationally) after never averaging more than 67 possessions per game under Chambers. PSU’s average offensive possession length is just 14.8 seconds, just .6 seconds longer than the up-and-down UCLA Bruins that Michigan saw earlier this year.

Unlike the Bruins, Penn State isn’t very efficient despite the tempo. The Nittany Lions are ranked 240th or worse in eFG%, offensive rebounding percentage and free throw rate. The Nittany Lions make just 45.2% of their twos (286th) and 34.7% of their threes (173rd) for a 47.5 eFG% (263rd). Penn State is better in transition than half court, so the push for tempo makes sense, but they are still lacking the number of shooters required to have an efficient offense.

Defensively, the Nittany Lions grade out much better and allow just 96.2 points per 100 adjusted possessions (57th). Penn State is ranked in the top 100 in eFG% defense, turnover rate and free throw rate. The one weakness of the PSU defense has been defensive rebounding as teams have rebounded 30.3% of their misses (201st) against the Lions.

The Nittany Lions play predominantly man-to-man defense, but will experiment with some different looks. 16.4% of PSU’s defensive possessions are full court press and 13.5% are various zone looks, per Synergy. The zone defense has been very good this year, and does a good job of forcing turnovers — something that Michigan struggled with a bit at Iowa.

Penn State’s rotation is built around several key returning cogs from last year’s team and a recruiting pipeline to Roman Catholic in Philadelphia, which provided both of its key freshman contributors.

6-foot-2 junior Shep Garner is a familiar face to Big Ten fans. He’s leading the Nittany Lions with 13.2 points per game, but came off the bench in their last game. Garner is a high volume ball screen player, but his efficiency has dropped this year in the pick-and-roll game. He’s still shooting 44% on twos and 35% on threes for a 49.1 eFG%.

Carr gives the Nittany Lions a second pick-and-roll guard, but he’s still learning to be efficient at the college level. He’s shooting 36% on twos and 37% on threes, but takes twice as many twos as threes. He’s also the leading setup man on the roster, allowing Garner to play more of a scoring role.

Stevens more of an undersized four man who shoots 48% from the field. He’s not a three-point threat, but he gets to the foul line more often than anyone else on the Nittany Lion roster.

Other than Garner, 6-foot-6 junior Payton Banks is the primary shooting threat to track. Banks is 42-of-102 (41%) from three-point range and he’s really the only reliable catch-and-shoot threat on the roster. He’s made 27 catch and shoot jumpers this season, while the rest of the team has only made 31.

6-foot-9 redshirt freshman Mike Watkins has stepped into the starting center role. Watkins ranks 10th nationally in lock percentage and is a plus-rebounder on both sides of the floor. He’s a good finisher (55%) and gets a few post-up opportunities per game and handles them well.

6-foot-4 sophomore Josh Reaves is known for his length and defensive abilities. He missed some early season time due to injury and is shooting 51% on twos an 25% on threes.

This is obviously a big ‘right the ship’ game for the Wolverines. Opening the season with a loss at Iowa wasn’t how anyone in the Crisler Center wanted the season to start, but there’s still a lot of basketball to played and one Big Ten road loss isn’t going to derail the season.

A home loss to Penn State? That would be a bigger reason to start panicking. KenPom projects a 74-63 Wolverine victory, giving the Nittany Lions a 16% shot at the road upset.