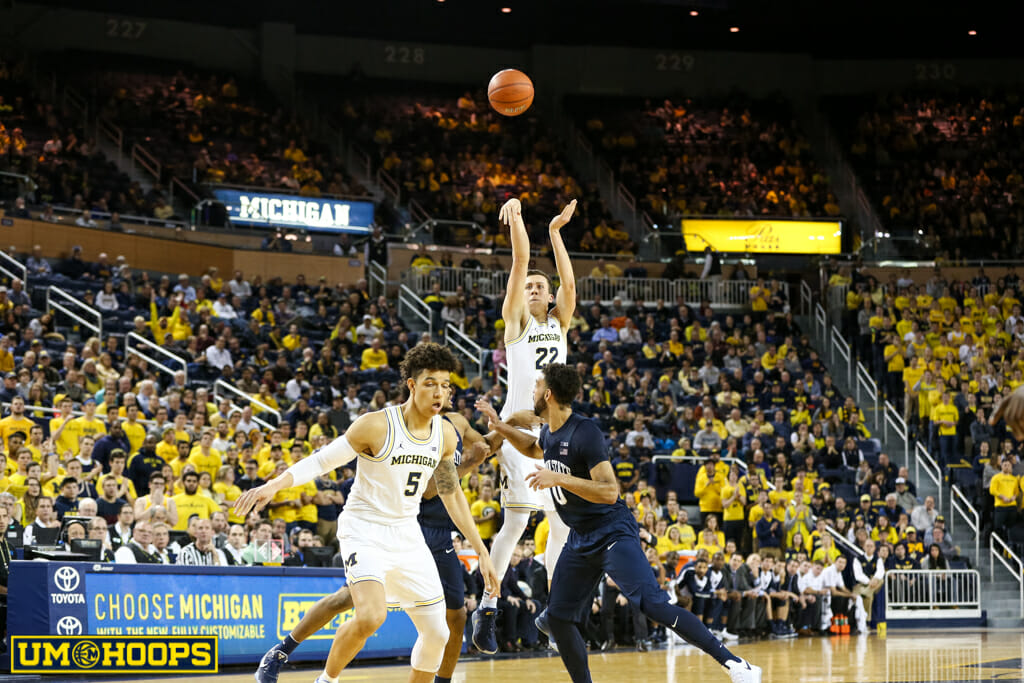 Michigan escaped with a win on Wednesday night, coming back from 14 points down to beat Penn State in the second half. Here are Five Key Plays from the win.

Michigan escaped with a win on Wednesday night, coming back from 14 points down to beat Penn State in the second half. Here are Five Key Plays from the win.

Michigan had no answer for Penn State freshman Lamar Stevens in the first half. The 6-foot-7 wing attacked whoever the Wolverines tried to put in his way. Muhammad-Ali Abdur-Rahkman, DJ Wilson and Zak Irvin were all first half victims defensively.

“I didn’t think they were that good until we got in the mix with them and could see how talented they were,” John Beilein said after the win. “They drove us wherever they wanted to in the first half and we let them. We were not physical defensively at all in the first half. Our starting five is not a physical team defensively. We must become that.”

Stevens was +10 for the game and he was a difference maker when he was on the floor. His problem was that he kept picking up cheap fouls and eventually fouled out in just 19 minutes.

Michigan needed something to go its way to provide at least a bit of positive momentum and it was Duncan Robinson that provided the first boost.

Both shots that Robinson hit weren’t easy or open. The first is one that he just doesn’t make last year, a pull-up jumper from the right wing off the dribble. The second was a nice pump fake into a transition triple.

That personal 5-0 run gave the Wolverines life as an 8 point deficit looks a lot more manageable than 13.

3. Derrick Walton turns it around

Derrick Walton had made one shot, failed to record an assist and had turned the ball over in the first three quarters of the game. He looked to be a shell of himself. He was missing open shots and forcing bad shots. But something finally clicked down the stretch as the senior point guard turned things around and pushed Michigan into the lead.

Walton looked like a different player during this stretch. He started making threes, making plays defensively and pushing the ball in transition with confidence.

That’s the point guard that Michigan needs and it needs him for more than 5 or 6 minute stretches.

After watching his senior teammate get Michigan back into the lead, Zak Irvin stepped up and hit a paid of huge mid-range jumpers to help the Wolverines secure the win.

First, Irvin hits from the right elbow after the Nittany Lions had regained the lead. Then he comes back and hits from the left elbow to help Michigan pull away.

Michigan needed one more basket to ice this game away comfortably and it went back to the same action that had gotten it to this point: Zak Irvin in the high ball screen game.

But this time, Pat Chambers wasn’t going to let Irvin shoot a comfortable mid-range jumper and he changed his defense. Penn State traps Irvin and while he makes the right read, he’s late and he sends his pass to Moritz Wagner skying off the backboard.

Making the right reads on time in the pick-and-roll game has been a struggle for Irvin at times and this was certainly one of them. Luckily, the Nittany Lions bailed Michigan out with an early missed three-point attempt by Tony Carr.