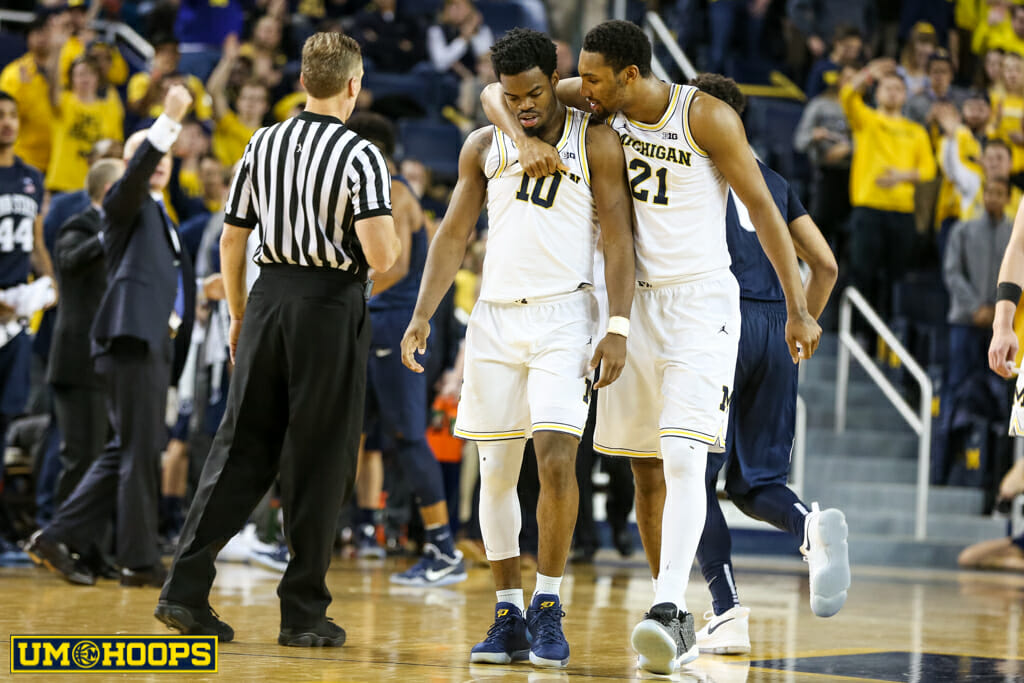 Michigan overcame a dismal first 30 minutes to escape with a win over Penn State as its senior guards Derrick Walton and Zak Irvin led the comeback effort.

Penn State walked into the Crisler Center on Wednesday night and punked Michigan for 30 minutes.

Nittany Lion head coach Pat Chambers might have had the most energy on the floor, but his players were next and the Wolverines were a distance third. The Nittany Lions beat Michigan to loose balls, shot as well as they have all season and looked like the better team. They answered every U-M run and extended their lead to 14 points midway through the second half.

But after playing its worst 30 minutes of basketball all season, Michigan woke up just in time to muster a comeback. The Wolverines erased a 13-point deficit in the final 11 minutes of play, thanks to some timely play from their seniors, and escaped with a much needed home victory.

It was a painstakingly frustrating reminder of just how far this Michigan team still has to go, but it was also a win in the direst of circumstances and one that John Beilein and his team will hope can provide a bit of extra confidence moving forward.

It’s rare for Michigan to win a game when it doesn’t out-shoot its opponent, but tonight was a case of just that. Turnovers kept the Wolverines just close enough to finally mount a comeback when the shots started falling down the stretch. Penn State gave the ball away 14 times in 65 possessions (21.5%) and Michigan converted those giveaways into 20 points. Michigan gave the ball away 5 times in 65 possessions (7.7%) which led to just 4 PSU points.

Michigan shot more twos than threes (38% of field goal attempts) and made 54% of its twos, but the three-pointer wasn’t falling (6-of-21) and that made for a long night for a struggling offense. There were a fair number of mid-range jumpers in that mix, but the two-point shooting saved what could have been a long night offensively. To score 1.11 points per possession on what felt like a disastrous offensive night is actually a pretty good performance, right now only three Big Ten teams have done better than that in league play.

Michigan’s defense has been a problem in both of its first two Big Ten games and it is no secret that it was a problem last year as well. Can they improve? Sure, but it’s pretty clear that they haven’t improved by that much to this point.

Penn State has some talented newcomers, but those freshmen also gave the Wolverines a lifeline down the stretch with some classic freshmen mistakes. Lamar Stevens was dominant when he was on the floor, but fouled out of the game in 19 minutes (PSU was +10 while he was on the floor). Point guard Tony Carr struggled and had more turnovers (3) than made field goals (2) while settling for some questionable three-point attempts late.

Despite the fact that Michigan eventually came back, it’s worth pointing out that the Wolverines had a number of ugly mistakes as well. Penn State offensive rebounded two missed free throws, Zak Irvin missed a pair at the line late, and the Wolverines seemed to blow a number of layups that could have gotten them back into the game sooner. There will be plenty of teaching material in film session.

Basketball is a game played on the margins. The Wolverines dropped a game against Virginia Tech that they controlled throughout and just lost an overtime game at Iowa where they should have had a shot to win. If a couple of breaks go differently, maybe those are wins and this is a loss.

There are so many Big Ten teams that are pretty good, but far from great or dominant that I’d expect plenty more games just like this in conference play. Almost every game is winnable, but they might all be losable too.

To illustrate that phenomenon, the 85% chance that KenPom gave Michigan to win tonight was higher than any game remaining on the schedule. Conversely, KenPom gives U-M a 39% chance of better of winning all but two (at Indiana and at Wisconsin) of its final 16 games.

If Michigan gets in a habit of playing as flat and lifeless as it did for the first 30 minutes tonight, it’s going to lose enough games this season that a few close ones don’t matter. There are some clear mental hurdles with this team and it’s tough to ever know if they are fully corrected. This same group of players dominated Marquette and SMU at the Garden, collapsed against Virginia Tech and came back after a horrendous early performance against Penn State.

No, Derrick Walton and Zak Irvin aren’t the best leaders to ever walk into the Crisler Center, but at this point all Michigan can do is hope that the light clicks on as their career winds down. The final 9 minutes tonight felt like they could be a big step in the right direction, but it’s anyone’s guess where this team goes from here.

Next up is Maryland at home on Saturday afternoon. The Terps are coming in off of a mid-week bye and split their opening games against Illinois and Nebraska. Expect another one to come down to the wire.