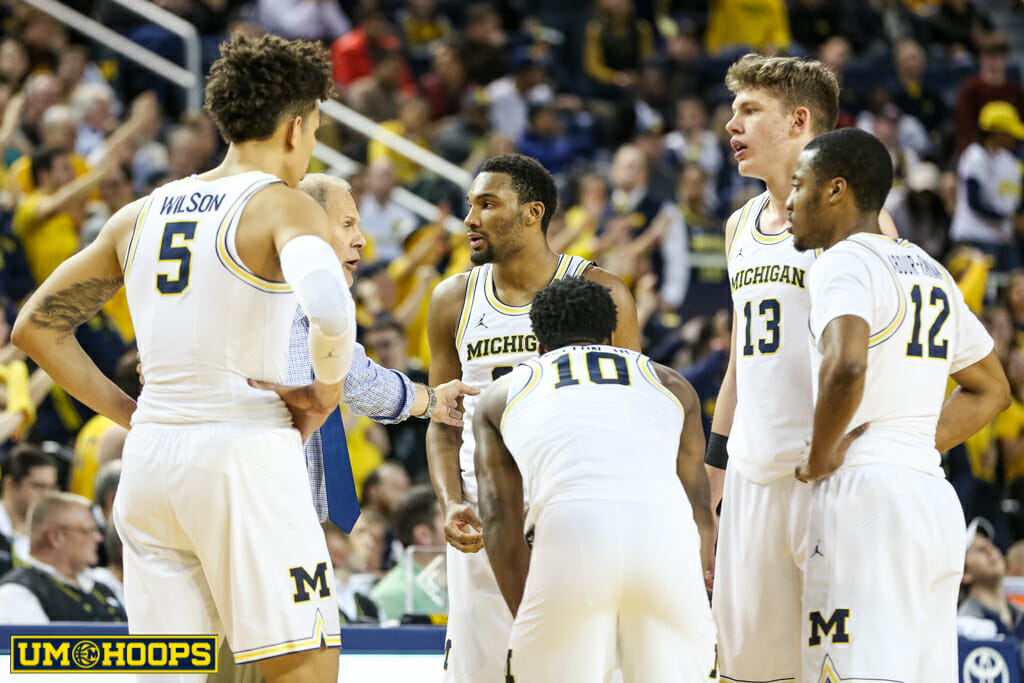 Facing a double-digit deficit in the second half, the Wolverines talked about turning things around and then did it.

Michigan went into the under-12 media timeout in the second half down 54-42 to Penn State at home. There were times last year where it would only get worse for the Wolverines and they’d get blown out. Not last night.

The Wolverines, as John Beilein has implored all season, took ownership of the game. In that huddle, the voices of seniors Zak Irvin and Derrick Walton, as well as Moritz Wagner, were the loudest, but several players contributed to the conversation.

“I didn’t have to say anything,” Beilein said. “They were all extremely charged up and upset with each other. I don’t mean pointing fingers. They were very encouraging in very strong words: ‘No, we’re not losing this game. We’re not starting off in the league 0-2. We’re going to make this happen.’ That’s all I heard.”

Shortly after play resumed, Michigan went on a 10-0 run to cut the deficit to 55-52. Penn State didn’t fold, but big plays in the final minutes propelled Michigan to a 72-69 win.

There was more urgency on the defensive end than there had been at many key times earlier this season, including in Sunday’s loss at Iowa. After that game, Beilein was perplexed at how Michigan could allow an easy basket to send the game to overtime. “Take a charge, get a block, do something,” he’d said.

On Tuesday, he expanded on what he calls the “tape delay” that can paralyze a player momentarily. “Do something, even if it’s the wrong thing.”

Against Penn State, Michigan did something. The difference in the game was that the Nittany Lions turned it over on 21.5 percent of their possessions. Many were unforced, but the Wolverines recorded nine steals, their highest number (both in total number and percentage of possessions) since the season opener against Howard.

Only time will tell if this is a turning point for Michigan. Let’s not pretend it was a great defensive performance—for much of the game, it certainly was not. Penn State drove the ball downhill at will, especially in the first half. Some of the shots Michigan allowed down the stretch were similar to Iowa’s attempts. Penn State missed; the Hawkeyes hit.

But there was a conscious effort to take action. Beilein said that during one timeout, Mark Donnal told Wagner, “You’ve got to set better screens.”

“I’ve never heard him coach the other guy,” Beilein said. “I don’t know if it’s this generation. Their communication skills and dealing with people—we have to work on it every day to get it done. They know that, and [the aforementioned timeout huddle] was a great example where it all came together. ‘Our backs are against the wall now, we have to all talk and get through this.”

Taking ownership when your backs are against the wall is great, but more often than not it’s going to be too late.

Michigan figured it out soon enough to beat Penn State, but the games aren’t going to get any easier. The Wolverines aren’t going to win many more games this season if they mail it in until midway through the second half on any given day.

Will Wednesday’s lesson stick with the Wolverines? Or will they have to learn it again and again. A Saturday afternoon date with Maryland will be the first chance to find out.