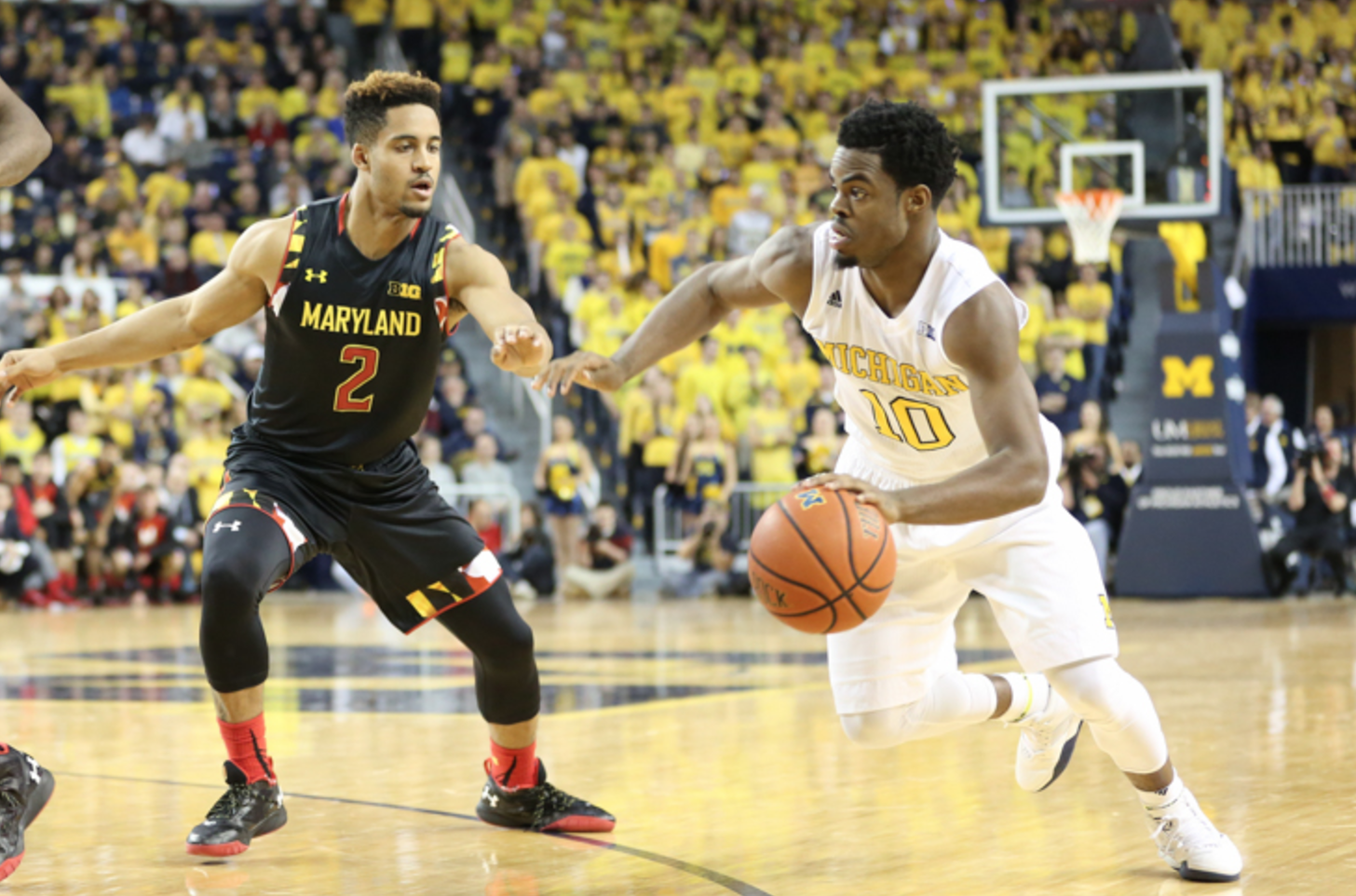 Michigan hosts Maryland on Saturday afternoon as it looks to improve to 2-1 in Big Ten play.

Last year Michigan picked up one of its best wins of the season as it knocked off the Maryland Terrapins at home in early January. Maryland was ranked third in the country as the Wolverines rode Zak Irvin and Duncan Robinson to a critical upset win.

This year, Maryland and Michigan are two teams that seem to be searching to rediscover their identities. The Terps are are 13-2, but their non-conference schedule was littered with a handful of narrow wins over average competition, a home loss to Pittsburgh and one impressive neutral court win over Kansas State. Like Michigan, they’ve started Big Ten play with a 1-1 record. Maryland steamrolled Illinois at home, then allowed Nebraska to march into College Park and leave with a 2 point victory.

Melo Trimble is still around, but he starts next to three freshmen and a sophomore — a far cry from last year’s starting lineup which featured two seniors, a redshirt junior and a freshman All-American.

Maryland’s defense does a good job of defending threes — 31.7% 3PA/FGA and 31.2 3P% allowed — and twos — 44.5 2P% allowed — for a defensive eFG% of 45.2%. While it is partially competition induced, the Terps have the best eFG% defense in Big Ten games (42.2) and held Illinois and Nebraska to just 23.5% 3-point shooting. Michigan has had three sub-par perimeter shooting games in a row and things shouldn’t get much easier against the Terps.

Maryland hasn’t been great on the defensive glass — a weakness that Michigan failed to exploit against Penn State — and is just average at keeping its opponents off of the foul line. The Terps last four opponents have also given the ball away once every five possessions, but again that might be a product of playing teams like Nebraska, Illinois, Charlotte and Jacksonville State.

The Terps have attempted 44.2 free throws per 100 field goal attempts, 22nd best in the country. That well has dried up a bit in league play as they’ve only managed a 27.4 free throw rate while shooting 56% at the line through two conference games.

You know Melo Trimble by now. The junior point guard is a great pick-and-roll point guard who has had the knack for making plays in the clutch. His numbers regressed a bit last season while surrounded by so much talent and his junior numbers are closer to his sophomore year than his ridiculous freshman year. The primary culprit has been his three-point shooting (35% this year compared to 41% as a freshman) and turnovers (21.7% turnover rate compared to 18.3% as a freshman).

6-foot freshman Anthony Cowan joins Trimble in the backcourt this year and he leads the country in free throw rate. The 170 pound guard has attempted 82 free throws to just 87 field goal attempts, a free throw rate of 94.2%. Cowan has been turnover prone, but his assist numbers are good and he’s shooting 52% on twos and 33% on threes.

6-foot-7, 225 pound freshman forward Justin Jackson is a load as a combo. He starts at the four and can draw fouls (44% FTA/FGA), shoot threes (43%), attack the offensive glass, block shots and slash to the hoop.

Former Michigan target Kevin Huerter is the shooter to track. Two-thirds of his shot attempts are threes and he’s made 37.5% of his long range efforts. Those numbers are boosted by a 7-of-11 3-point shooting performance in his last game against Nebraska which boosted his season 3-point numbers by 5%.

Maryland’s big man rotation has been damaged by injury. 7-foot-1 Slovakian Michal Cekovsky started 4 games when healthy, but has missed the last two with a sore ankle. 6-foot-11 rebounding force Damonte Dodd missed five games with injury leading into the new year, but returned to play 13 minutes off the bench on Jan. 1.

6-foot-9 sophomore Ivan Bender has played additional minutes in their absence. He’s a solid finisher (67%) and rebounder, but he’s struggled with turnovers and isn’t a shot blocking threat. Of the trio, Cekovsky is the guy that will get the ball with his back to the basket on the block while Dodd appears to be the best defender and rebounder.

6-foot-8 graduate transfer LG Gill has also seen recent playing time at the five spot. The former Duquesne player is just 10-of-33 inside the arc this season and has played limited minutes

Before the conference season started, I wrote that these first five games were critical for Michigan to build some positive momentum because the schedule becomes so difficult in February. That hasn’t changed and this would be a great chance to build off of the Wednesday comeback against Penn State.

KenPom projects a 68-61 Wolverine win, giving Maryland a 27% shot at the road upset.