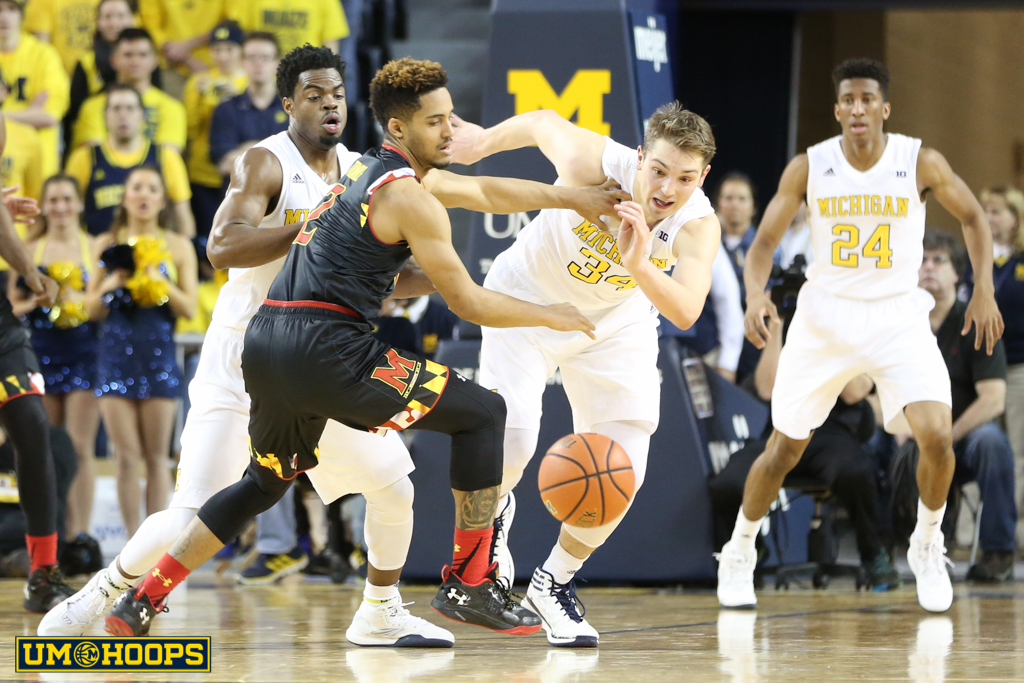 As Michigan prepares for Melo Trimble and Maryland, toughness remains a work in a progress.

It’s been the theme of Michigan’s season: toughness. John Beilein has used that word, along with “grit” and “edge,” plenty since November. Simply put, he wants his team to show those qualities more often.

“The good news is these are a bunch of good kids,” Beilein said on Friday afternoon. “The bad news is the edge a lot of great teams have has been lacking in some games. There’s no way we can win without that edge. There’s no way.”

“We haven’t proven we’re a tough team. We’ve proven we can be tough, at times. We’ve got to be tough every single game, all the way through.”

They are traits that are not always evident during the recruiting process. Beilein said there are many successful college players who never took a charge or dove for a loose ball in high school. And even if a player did show that willingness, Beilein wouldn’t give them a scholarship if they couldn’t shoot or pass. Ideally, he’d want a player that had skill and toughness.

Coaxing that mentality out of this group has been challenging. It doesn’t come naturally to them. “You almost have to rely on their intelligence,” Beilein said. The players watch tape of close losses, see the handful of plays where they lost focus or backed off a driving opponent, and “you hope they’re smart enough to get that.”

Beilein said he’s seen some progress in this area recently. “If you see me hug somebody during the game because they did something right, it means we’ve been we’ve been working on it a long time.”

Matching up with Melo

Michigan has done a good job of slowing Maryland star Melo Trimble over his career. Derrick Walton shut him down in the Wolverines’ big home win last season. This year, Trimble is playing off the ball more. Beilein said he’ll throw Walton, Zak Irvin, and Muhammad-Ali Abdur-Rahkman at Trimble at different times. Walton loves the challenge of facing an elite player, but Beilein would prefer if Abdur-Rahkman took that assignment.

“It’s hard for Derrick and Zak to be defensive stoppers when we are playing through them so much on offense. If Muhammad can continue to grow in his defense and get to the point where we can put him on a Trimble and say, ‘That’s your guy,’ [it would be ideal].”

Beilein referenced last season’s game against North Carolina State, in which Abdur-Rahkman replaced an injured Walton and locked down Cat Barber. “That’s got to be a mentality for him. We’re encouraging it, but we can’t create it for him.”

The Terrapins’ defense that has Beilein’s attention, too. Maryland has had an above-average defense since joining the Big Ten and that appears to be the case again this season. The Terps have had the best defense in the Big Ten through early season play.

“We’ve been able to score some points [against them] but we’ve also shot the ball well, even when guarded,” Beilein said. “We’re going to have to do that again; it’s hard to do.”

Said Beilein of Duncan Robinson: “It’s tough for us to get him open sometimes when [opponents] are just not not leaving him.”

Such is life in Division I basketball, where scouting reports are thorough, and intra-conference familiarity makes it tough to have a secret weapon. Robinson shot 45 percent from three last season but that number dipped to 35 percent in Big Ten games. He is at 39 percent from deep this season.

“We’re trying to dial up stuff but he’s got to cut harder, run faster, and not be afraid to shoot,” Beilein said, adding that the attention Robinson gets frees things up for his teammates, especially DJ Wilson recently.

Robinson hit some key shots against Penn State, including a pretty pull-up jumper. “I wasn’t in favor of that shot until it went in,” Beilein joked. “Then I thought it was a great shot.” Asked if he could have made that play last season, Robinson said, “Maybe I could have done it, but I don’t know if I would have. I feel a little more confident this year after a year playing in the Big Ten.”

While some Wolverines are still learning their roles, Robinson’s is clearly defined: He’s the sniper off the bench (who often plays starters’ minutes). Continuing to find ways to get him shots will be important.