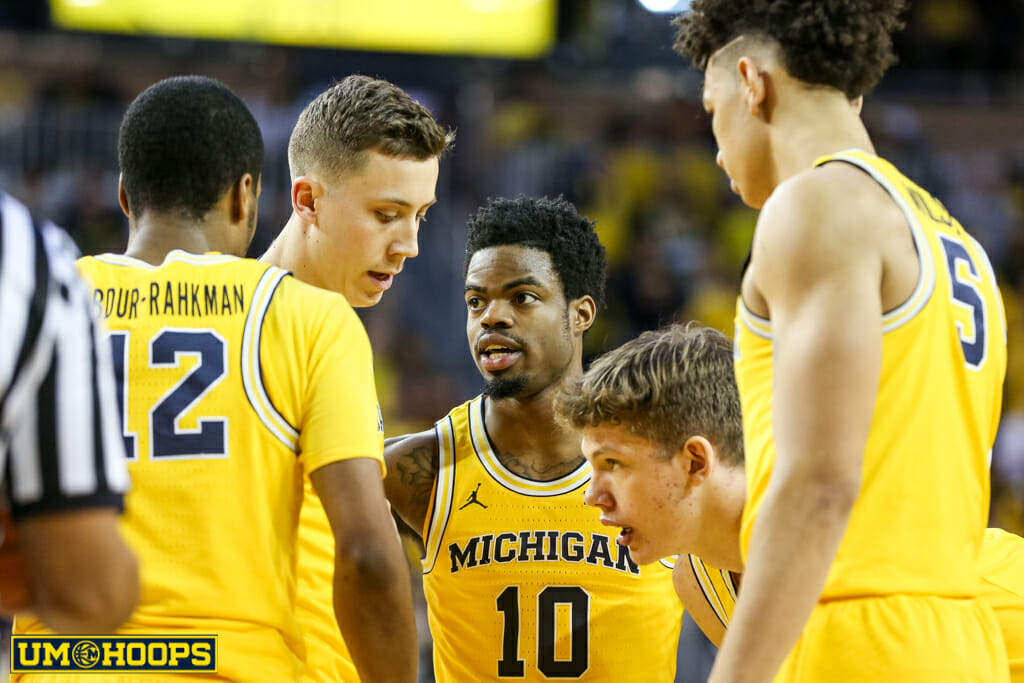 Michigan coaches and players can talk about defense and toughness until they are a blue in the face, but right now this team can’t play it.

Michigan coaches and players can talk about defense and toughness until they are a blue in the face, but right now this team can’t play it.

Maryland walked out of the Crisler Center with a win on Saturday afternoon and it was because the Wolverines just couldn’t stop them. The Terps made 10-of-15 three-point attempts on the afternoon and scored an easy 1.25 points per possession.

Michigan fought back from a 9-point halftime deficit, but Maryland had an answer every time the lead was trimmed to a single possession. The Wolverines were able to get back into the game because they held Maryland to just 1 point in the first 9 possessions of the second half.

Yes, Maryland was hot from three-point range. Jared Nickens had a 31.5 eFG% entering the game and hit four triples on four attempts. Melo Trimble and Anthony Cowan hit some deep step back threes late in the clock. Whatever, sooner or later you have to figure out ways to get stops.

Teams are now making 41.4% of their threes against Michigan and 54.7% (!) in league games. There are only 9 three-point defenses in the country that have been worse than that this season.

Maryland made 10 threes on 15 attempts. Maryland rebounded over a third of its misses. Maryland scored on 17 of its final 22 possessions, 12 of its last 15, 7 of its last 8. You get the picture. The Wolverines couldn’t get a stop and that’s why they lost this game.

Michigan’s offense isn’t the problem. Through three games its on pace to be the second or third best offense in the conference despite playing two of the top four defenses in the league. Scoring 1.13 points per possession should be good enough to win Big Ten games. The Terps have only given up that many points per possession once this season.

But it all comes back to defense and making winning plays down the stretch. Maryland had the answers every time and the Wolverines came up just short. Silly turnovers, poor shot selection, missing critical late free throws. You can point to Michigan’s executional mistakes offensively, and there were plenty of them, but if you don’t get any stops then you are forcing yourself to be nearly perfect offensively and this team isn’t that.

What’s the answer? It has to come from inside somehow, but if it hasn’t happened yet… It’s not like the Wolverines can make sweeping personnel changes. Who in the starting lineup, or the rotation, would be described as an above-average defender?

The only team that I can remember that turned an awful defense into a decent one was the 2010-11 Michigan team. That group allowed 1.22 points per trip over its first 7 conference games and then turned the season around in East Lansing and made the tournament. Is that repeatable? I’m not sure with this group.

John Beilein didn’t have a great game either. When he rolled out the the 1-3-1 zone after a Maryland timeout, it felt like a layup was inevitable. It was. I get the idea of going zone out of a timeout and understand that Maryland was terrible against Nebraska’s 1-3-1 zone, but when was the last time that Michigan got a stop out of the 1-3-1?

I also don’t understand using a starter to intentionally foul in the final minute of the first half — especially by a coach who has historically been so foul averse. That was a big reason why Walton found himself in foul trouble early in the second half.

Next up, another road game as Michigan heads to Champaign. If you want to argue that any Big Ten team other than Wisconsin is significantly better than any other then go ahead, but at this point I have no idea. Right now KenPom projects 11 of 14 teams to finish between 7-11 and 11-7. There are winnable games on the schedule, but sooner or later this team must defend.