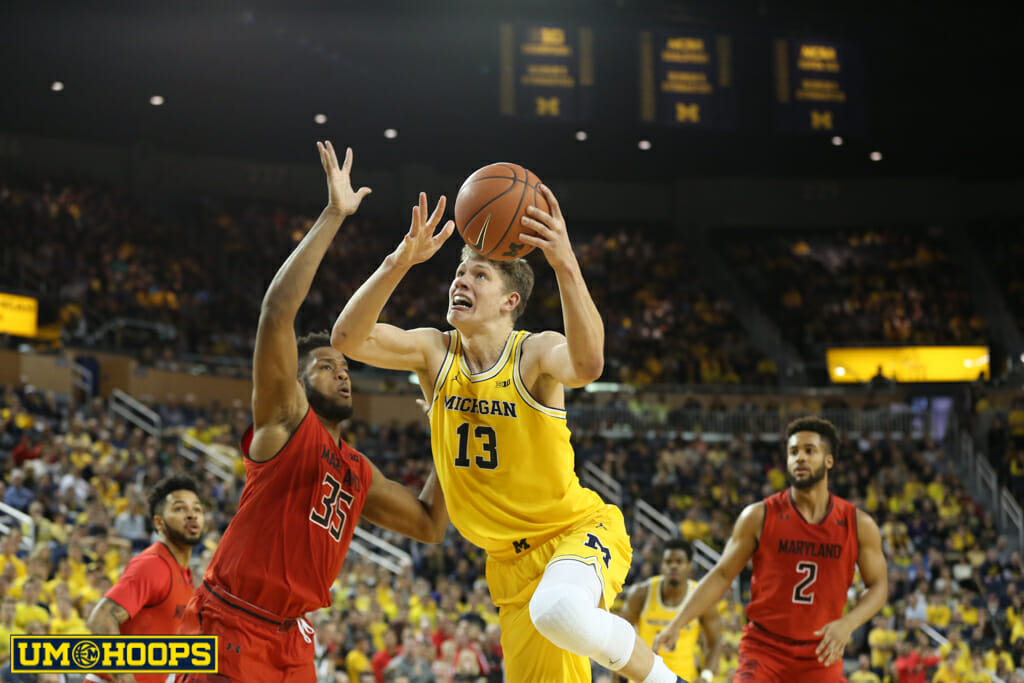 “… Michigan played terrifically,” said Maryland coach Mark Turgeon. “They shot over 60% in the second half, made shot after shot after shot, and our guys just kept responding.”

Basketball is a game of runs, and Saturday afternoon, it was the Maryland basketball team that had the most success in that area en route to a 77-70 victory over Michigan at Crisler Center.

After falling behind early, the Wolverines simply could not complete several comeback attempts as the Terrapins countered strongly each time. Michigan cut the deficit to a single possession 10 different times in the second half, but was never able to take the lead.

There was the stretch in the first half when after Maryland ripped off a 14-4 run after senior forward Duncan Robinson had tied the game at 14 apiece with a 3-pointer. There was the early portion of the second half when Michigan scored six straight to cut the deficit to three before faltering. Then, there were the several possessions down the stretch when the Wolverines needed a stop but could not find one.

And while there were times when Michigan’s inability to finish off its own runs, to either tie the game or re-take the lead, was due to a failure on the part of the offense — sophomore forward Mo Wagner missed the front end of a crucial 1-and-1 down the stretch, while there were several other wasted possessions — most of the problems had to do with the defense.

Michigan suffered letdowns on the other side of the court, failing to get timely stops even senior forward Zak Irvin, Wagner and the rest of the offense clawed to get the Wolverines back into the game.

Time after time, a big Michigan bucket was answered in kind by the Terrapins, who shot a cool 7-of-8 down the stretch.

“… Michigan played terrifically,” said Maryland coach Mark Turgeon. “They shot over 60% in the second half, made shot after shot after shot, and our guys just kept responding.”

This isn’t a new problem for the Wolverines — while the offense has sputtered at times, the defense has been the culprit behind most of Michigan’s losses this year. It couldn’t get the job done late against Virginia Tech, blowing a late lead, it struggled mightily against a high-powered UCLA team and it could not stop a Peter Jok-led Iowa team on the road.

Against the Terrapins, it allowed two Maryland players not named Melo Trimble to make huge differences throughout.

While Terrapin forward Michal Cekovsky was still sidelined, big man Damonte Dodd was back in force. He started the game on a tear as Michigan’s pick-and-roll coverage lost him repeatedly.

The senior forward, who Maryland coach Mark Turgeon said was coming off a knee injury, tallied 15 points in just 21 minutes, with many of his made baskets coming off easy dunks and putbacks. Dodd’s effectiveness was supposed to have been curtailed by his recovery from injury, yet Michigan struggled with him down low.

Then there was Jared Nickens, who entered the game shooting 9-of-36 from behind the 3-point line all year. He promptly went 4-of-4 off the bench, proving to be another momentum changer for his team on a day when Trimble was held in check for most of the game.

“We have to really close out on people and get to shooters like today,” Beilein said. “Huerter, Jackson and then Nickens — they’re not guys you close out short and then contest; you just run them off the line.”

Added Wagner: “… There are just moments where it seems like we fall asleep collectively. Little detailed plays like that back screen, I don’t see that coming, we don’t switch or Melo Trimble just splits me on that ball screen like it’s nothing for a basket. Those are just things that can’t happen on that level, and it’s very frustrating.”

It was just one day ago when Beilein mentioned a desire to see more toughness from his team. And while Michigan didn’t go away quietly, its failure to complete the comeback shows that developing toughness is still a work in progress.

“Maryland really played good today,” Beilein said. “But we had some moments there where we don’t play with the same IQ, intensity that you need. It bites you in this game. It’s a six-point swing in a matter of seconds.

“What was tough is when we’d make a big play to cut it down, they’d make one coming right back. It’s hard to keep doing that.”