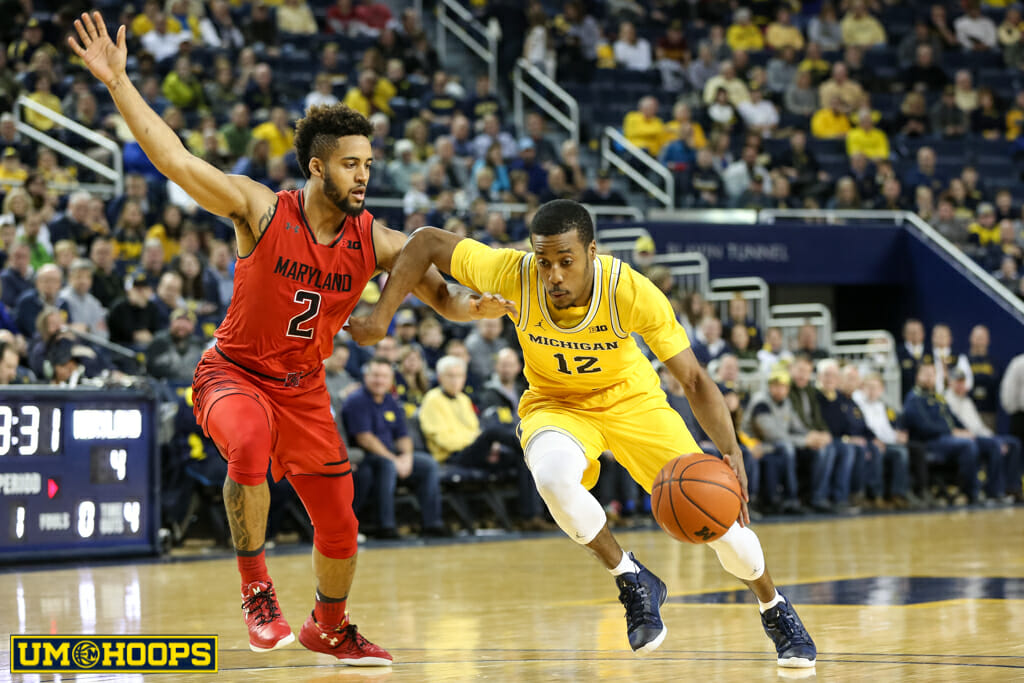 Michigan must improve its three-point defense if it wants to compete in the Big Ten.

Michigan’s three-point defense this season has been awful (only six teams in the country have defended the three worse) and that was case again yesterday in a 77-70 home loss to Maryland. The Terrapins hit 10 of 15 from downtown. Jared Nickens came off the bench and drained all four of his long-range attempts.

Yes, as John Beilein and Zak Irvin pointed out after the game, Nickens entered the game shooting just 26 percent (11 for 42) from three on the season. But he was much better than that in his previous two college seasons and, after he hit two in the first half, there was no excuse for leaving him.

On Nickens’ first triple, Duncan Robinson got caught up in a staggered screen. The shot was deep, but Nickens had time to set his feet. The second was an apparent miscommunication between Robinson and Zak Irvin. This was one was even deeper, but the contest was way too late.

“The first two he made in the first half, we were OK with that,” Irvin said. “But then he made the two in the second half, which were tough. We talked about at halftime we had to be able to get in him after he made two.”

Nickens’ second-half threes came after Michigan had cut the deficit to one possession. One was the same play as his first three. The final came after a high ball screen for Melo Trimble. With neither defender guarding the action in great position, Muhammad-Ali Abdur-Rahkman had to come from the wing to help, leaving Nickens open in the corner.

“They were runaway threes at the NBA line,” Beilein said of Nickens’ shots. “There’s not too many people that can defend a guy running away at 26 feet [who] rises up and shoots it. You can either go through the screen or chase it. We decided to chase the rest of the time, but we didn’t chase it on that last one.”

Of Maryland’s six other three-pointers, two were one-on-one, off-the-dribble daggers as the shot clock was running down (one by Trimble, one by Anthony Cowan). Sharpshooter Kevin Huerter was wide open for two; he was lost on a secondary break and was the beneficiary of good ball movement. He used a shot fake and dribble to get Trimble and open look as well. You could see why Beilein recruited him hard. Justin Jackson (a 43 percent three-point shooter) was not given proper respect on his lone attempt.

Right now, Michigan would love to play offense against itself. That’s not good. The players and coaches are certainly aware of the problems.

Said Irvin: “We’ve just got to be able to back it up now. We do a lot of talking how we want to get stops, want to do this, want to do that, and it’s not showing. It didn’t show this afternoon. That’s why we lost.”

Remember that—usually—a team is never as bad as it looks after a game like this. But given Michigan’s defensive stats through 16 games, Maryland’s shooting wasn’t an anomaly either.

Freshman point guard Xavier Simpson looked as comfortable as he had all season on Wednesday against Penn State, and it carried over to yesterday’s game. In the first half, he drove baseline and found Robinson for a corner three and, shortly after, drew a push-off foul on Trimble.

As Simpson came off the court for a media timeout, Beilein gave him a hug. Simpson finished with two assists in nine minutes. He is still learning scouting reports—who to do what against in ball screen coverage, for example—but his defensive skills are solid.

“He made some things happen,” Beilein said. “That’s why he’s out there. He’s made the progress in practice. It’s good to be able to allow Derrick [Walton] to have a little more rest. We’ve got to find a way to maybe have Derrick play some off-guard at times, or just have those guys…sub for each other.”

Walton was nonexistent at times against Maryland, but it will take more than one bad game for Simpson to seriously cut into the senior’s playing time.

Muhammad-Ali Abdur-Rahkman scored 12 points on 6 of 11 shooting from tw0-point range. He missed his only three-point attempt, as he continues to struggle with his outside shot.

“We are trying to encourage him to get to the foul line, to go downhill,” Beilein said. “Trying to make sure he…gets two feet in the paint.”

Irvin echoed his coach’s sentiments: “For him to be able to get downhill like that was huge. He can get in the paint with the best of them in the Big Ten…He’s tough to stay in front of; he’s so quick and fast.

“He kept us in it, especially at the beginning of the second half. He gave us that spark to be able to start that comeback. That’s something we need going forward.”

Abdur-Rahkman is still searching for his role on both ends of the court. Beilein wants him to be a defensive stopper and while, for the most part, he handled Trimble well yesterday, he’s not there yet.

The junior finding consistency will be key to Michigan improving this season. When he’s picking his spots to drive and knocking down open shots, he gives the Wolverines another reliable offensive option. In this case, he’s remembering how to attack the rim, but anything outside of 10 or 11 feet has been a struggle.