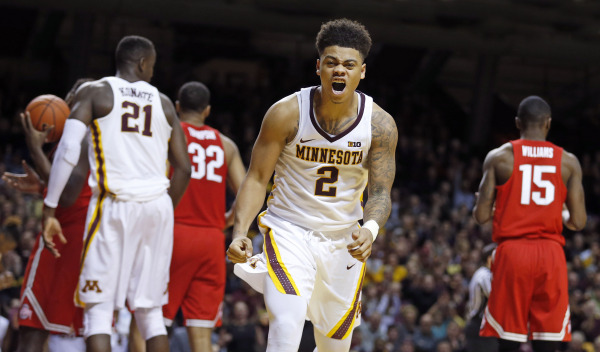 Big Ten Power Rankings are back. Two weeks into Big Ten play, every team has lost at least one game and 11 of 14 conference teams are projected to finish between 7-11 and 11-7. If you disagree with anything other than 1st, 2nd or 14th in this week’s power rankings, you probably have a fair argument.

Big Ten Power Rankings are back. Two weeks into Big Ten play, every team has lost at least one game and 11 of 14 conference teams are projected to finish between 7-11 and 11-7. If you disagree with anything other than 1st, 2nd or 14th in this week’s power rankings, you probably have a fair argument.

Once again, Purdue is leading the conference in post-up offense. The Boilers have routinely played out of the low post more often than any other team in the conference and that is the case once again this year, but they have company. The Boilermakers aren’t the only post-up heavy team in the league this year with Wisconsin, Illinois and Indiana all averaging at least 12 post up possessions (including passes) and scoring .99 points per possession or better.

The Boilermakers got the best of the Badgers on Sunday afternoon and that’s enough to earn the top spot in this week’s rankings.

Wisconsin lost at Purdue on Sunday, but has already traveled to Indiana and Purdue and split the difference. The Badgers don’t play Purdue again and still probably have the inside track on winning the conference.

For all intents and purposes, Greg Gard has just allowed Wisconsin to continue to be Wisconsin, but one stylistic difference appears to have stuck: Wisconsin forces turnovers now. Bo Ryan’s last five teams in Madison ranked 280th or worse in forced turnover percentage nationally. Greg Gard’s 2015-16 team led the Big Ten by forcing giveaways on 20.1% of possessions last year and now is ranked first in the league with a 24.2% forced turnover rate this year.

The Badgers have now forced turnovers more than once every five possessions in 7 of their last 8 games and it’s big man Ethan Happ who is leading the conference in steal rate.

Minnesota is the surprise story of the Big Ten with a 3-1 start featuring road wins at Purdue and Northwestern and a home win over Ohio State. The Gophers’ one loss was in overtime to Michigan State. In a league where it’s hard to distinguish between any teams from 3 through 13, Minnesota has made the best case that they deserve to be slotted in a tier above — and that’s hard to say after last year’s woeful 2-16 season.

Freshman wing Amir Coffey has been terrific and Minnesota is the best team in the Big Ten at getting to the free throw line, but let’s take a closer look at Nate Mason. Mason has been the top-performing ball screen guard in the Big Ten and I would credit him with a significant portion of Minnesota’s improvement.

Mason is a legitimate dual threat out of the ball screen game as he passes on 53% of his pick-and-roll possesssions and shoots on 47%, ranking better than the 80th percentile in both.

Maryland might not have a gaudy KenPom ranking thanks to a non-conference that didn’t see many tough opponents or blowouts, but the Terps are 2-1 and actually have the best efficiency margin in conference play. They went and won at Michigan and blew out Illinois at home, but choked away a game to Nebraska in which they were outscored 12-2 down the stretch. This is a young Maryland team, but with Melo Trimble and some surrounding talent there’s plenty to work with and they are 5 bad minutes away from a 3-0 record.

Nebraska was the early feel-good story of the 2016-17 season as it jumped out to a 3-0 start, but I’m going to offer a word of caution to the Cornhusker faithful. There were 229 possessions in the first three games of the conference season and Nebraska outscored its opponents by 9 points — that’s just .03 points per possession.

The road wins were impressive and Nebraska has clearly shown the toughness required to win on the road at places like Maryland  and Indiana, but despite shooting 42% from three-point range (after shooting just 29% from three in non-conference play), the Huskers are only outscoring Big Ten teams by .4 points per 100 possessions. .

Despite the narrow margins, there’s plenty to admire about Tim Miles’ team. First, they played a hell of a non-conference schedule and appear to be better for it. Second, they they have one of the best backcourts in the Big Ten. The duo of Tai Webster and Glynn Watson has given Miles a simple gameplan: ball pressure and ball screens. The Huskers have the best steal rate in Big Ten games, recording steals on 15.2% of opponent possessions. Sustained for a whole season, that would trail only West Virginia nationally.

Miles has also gone all in with the pick-and-roll and any team that is going to face the Huskers is going to have their ball screen defense tested. Nebraska records a shot out of pick-and-roll action (including pass outs) 29 times per game, that’s over 30% more than the other ball screen frequent teams (Maryland, Illinois, Minnesota and Michigan) in the conference.

For the whole season, Nebraska might not be as efficient as some of the better pick-and-roll teams in the league, but those numbers are turning around over the last few games as Watson and Webster have been dominant in Big Ten play.

When we look back on it, the December 27th overtime win at Minnesota might be remembered as the win that turned Michigan State’s season around. The Spartans still have major offensive concerns (when was the last time that Michigan State had the worst offensive rebounding team in the conference? At any point.), but the defense has been good and they’ve started to show the vintage ability to grind out wins.

Unfortunately, until things get better offensively, there are going to be more games like Saturday’s loss to Penn State at the Palestra where great defense isn’t enough. The Spartans held the Nittany Lions to .95 points per possession (and .73 points per possession in the second half) and lost by 9. Winning away from home is tough, but dropping one when the other team has more turnovers than made field goals in the second half is tough to stomach.

Tom Crean has plenty of work to do to fix his defense which is the worst in the Big Ten allowing 1.2 points per possession, but there’s no doubt that the Hoosiers can score. Indiana destroyed Illinois on its home floor (1.42 PPP to 1.18) on Sunday to bounce back from a disappointing 0-2 start.

This group has only played one game on the road this season (a 71-68 loss to IPFW) and has plenty of head scratching results on the resume, but they also beat Kansas and North Carolina. The defense just has to get better, but the talent and ability is there. There just aren’t many teams capable of scoring like the Hoosiers and if they can figure out just a couple of things defensively I’d expect them to string together quite a few wins.

Northwestern picked up a much-needed road win at Nebraska on Sunday to even its conference record. The next four games will be critical for the Wildcats if they want to make the NCAA Tournament. A stretch that features at Rutgers, Iowa, at Ohio State and Nebraska could help them rack up wins before games against Indiana and Purdue.

I’m not sure there’s a team in the Big Ten that plays as hard as Penn State. Right now, the Nittany Lions look almost identical statistically to the Michigan State team that they beat on Saturday. They have the 2nd best defense in the league, but can’t make threes and can’t get anything done on the offensive glass.

Lamar Stevens has shown great potential, but his 12 turnovers in 4 Big Ten games are a concern. Starting guards Shep Garner (24%) and Tony Carr (31%) just haven’t been able to find their perimeter stroke in league play and when there’s only one reliable shooter on the roster (Payton Banks), it’s tough to score consistently.

Michigan’s three-point defense is a mess. Big Ten teams are shooting 54% from long distance against the Wolverines and Maryland just made 10-of-15 in the Crisler Center to pull off the road upset. Is three-point percentage defense luck or ability? Probably a bit of both. Ken Pomeroy has eloquently laid out the reasons why much of it can be described as luck, but teams are also going to make open shots at this level.

How many of Maryland’s 10 made threes were closely guarded? Here’s a look at the defensive contest on each attempt near the time of release. It’s not always pretty for the Wolverines.

The wheels fell off for Iowa at Purdue, but it bounced back with an overtime win against Michigan and took Nebraska to two overtimes in Lincoln before knocking off Rutgers. Iowa will go as Peter Jok goes. He’s using a league-high 34.5% of the Hawkeyes’ possessions in conference games and has managed an offense rating of 101.4 points per 100 possessions. That’s not enough for an Iowa team that needs him to power its entire offense.

There are three teams in the Big Ten that haven’t played a lick of defense in Big Ten play. Illinois is the one that hasn’t been able to score either. Illinois’ defense is as bad as Indiana’s (1.20 PPP allowed) and worse than Michigan’s, but its only scoring 1.03 points per possession while IU and Michigan rank 1st and 2nd in the league in points per possession.

Big Ten teams are shooting 58.5% inside the arc against the Illini and 40.3% from long distance for a 59.2 eFG%. Why can’t Illinois keep up? It’s only shooting 27.6% from three-point range in league play.

The situation isn’t pretty in Columbus. The Buckeyes played a weak non-conference schedule and dropped a game to Florida Atlantic. Now with a Thursday trip to Madison on the calendar, they’ve opened Big Ten play with an 0-3 record and lost Keita Bates-Diop to a season-ending injury. This is basically the same team that Matta took to the NIT last year and he’s going to have to turn things around quickly in a league where there are no off nights.

Rutgers might just have eliminated the ‘Rutgers problem’. The situation that plagued the Big Ten over the last two sesasons when there’s one team in the conference that loses so many games that it drags the rest of the conference down with it. For the last two years, playing Rutgers was more like a guarantee game than a conference game and usually came with an RPI ding. This year, the Scarlet Knights are 11-6 and boast a more respectable 137th KenPom rank (up from 279 last year).

Big Ten play has been an ugly wake up call — the Scarlet Knights have a 38.2 eFG% and are turning the ball over on 22% of their possessions — but maybe they can win a couple more games this year.