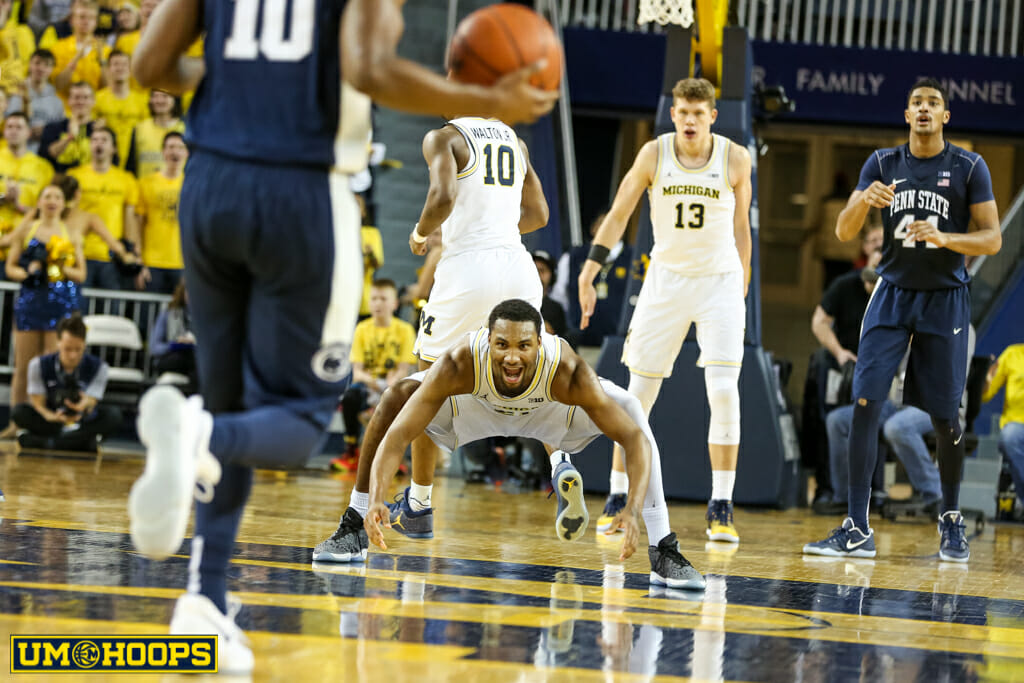 Yesterday, Andrew Dakich was awarded a scholarship for the winter semester. The senior guard, who is redshirting with the hopes of playing elsewhere next season, was given the news by a police officer, who first implied he was in serious trouble.

Yesterday, Andrew Dakich was awarded a scholarship for the winter semester. The senior guard, who is redshirting with the hopes of playing elsewhere next season, was given the news by a police officer, who first implied he was in serious trouble:

Even though Dakich couldn’t come up with any misbehavior in his time at Michigan, the seriousness of the proceedings terrified him and his teammates. “I almost said, ‘Am I being punked?’ But I had to let these guys talk,” Dakich said today. “They came out with a document, some sort of warrant, so it was scary for me.”

Freshman Xavier Simpson, whom Dakich has taken under his wing, was the most shook up. You can see it in the video: Even after the scholarship announcement is made and Dakich is mobbed, Simpson remains seated, stunned.

“Once he thought Dak was going to jail, he didn’t hear anything else,” John Beilein said. “He still at the end said, ‘Yeah, he got a scholarship, but he’s going to jail.'”

Dakich wants to transfer and play next season before pursuing a coaching career. He’s in the “right alley” for that, according to Beilein, given Dakich’s dad was a coach and some of his former assistants at Michigan are now head coaches elsewhere. Dakich said he has a passion for coaching more than anything else. He has been a great mentor to Simpson this season and makes in-game suggestions to the coaches.

He is confident this team can have a successful season, and that’s what’s most important to him—”leaving some kind of legacy with wins. I don’t care if I score or play; just being on a special team is what I really want to do.”

Dylan illustrated Michigan’s problems closing out on three-point shooters against Maryland. And those were the times that Maryland did in fact shoot (and connect). Even when Michigan’s defenders are close to the would-be shooter, too many times this season they have been off balance. Beilein has been drilling them on close-out fundamentals recently, but bad habits are hard to break.

“There are these really simple concepts of squaring up your man,” Beilein said on WTKA this morning. “You watch how many times we square up a guy and we have one foot up, and they just attack us because the close-out technique is not great. Despite what we work on, it’s really been hard for a couple of our guys.”

Schematically, the players shouldn’t have issues as Michigan is keeping its defensive gameplan fairly vanilla.

“It couldn’t be much simpler than it is right now,” Beilein said this afternoon. “We’re not switching any screens. We’re doing a classic hedge. We’re tagging guys. We’re probably doing less than we’ve done before.”

So, Michigan will try to do things better instead of trying to learn new things. And Beilein thinks they can, saying that players are often in the right place at the right time, but their bodies are in the wrong position. It’s often “a matter of angles,” he said.

Beilein has talked often this season about accelerating the processing speed and decreasing the tape delay. He spent more practice time yesterday on Michigan’s fundamentals, as opposed to focusing on Illinois’ tendencies, than he would have typically in the past two days before a game. How fast the drills translate to games will determine whether Michigan can turn its defense around.

“It’s frustrating,” Beilein said of the defensive mistakes. “But it’s happened before with some teams that turned out to be really good at the end of the year.”