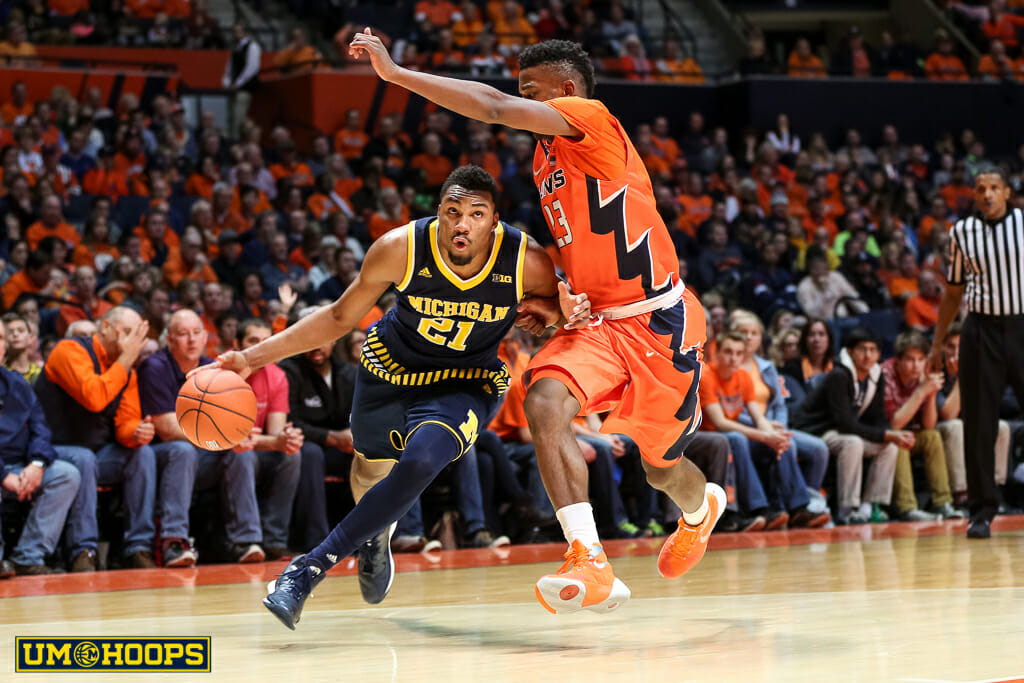 Michigan faces Illinois on the road tonight as it looks to even its Big Ten record at 2-2.

Michigan has already dropped a home game and a winnable road game and has a 1-2 conference record for the first time since 2011. Next up is a trip to Champaign to face an Illinois team that has faced a similarly rocky start.

The Illini knocked off Ohio State at home, but also lost two conference road games by a combined 41 points. A win for either team would go a long way toward righting the ship, while a loss could elevate early-season panic to another level.

This should also be a defense-optional conference battle. Illinois has allowed 1.2 points per possession in Big Ten play, Michigan has allowed 1.18 points per possession — both among the league’s worst. The Illini and Wolverines also have the worst eFG% defenses in the league at 59.2% and 57.5% respectively. The Wolverines have been the better offensive team, but expect a shootout as both teams are still searching for answers on the defensive side of the floor.

This is an Illinois team that appeared to be at least an average shooting team in non-conference play, but just hasn’t gotten anything to fall in Big Ten games. They’ve managed just a 45.7 eFG%, making 47.8% of their twos and 27.6% of their threes.

Illinois’ offense is heavy in the pick-and-roll game (25.8% of possessions) and it grades out in the 87th percentile in that department. Michigan’s ball screen defense struggled against Maryland over the weekend and will need to be improved against Malcolm Hill.

Turnovers have been an ongoing issue for the Illini, but getting to the free throw line is a strength. Illinois averages 43.4 FTAs per 100 FGAs in Big Ten play and has several rotation players who thrive getting to the line.

Illinois’ Big Ten defensive stats are ugly, but sample size caveats apply. They were blown out twice and have only played three games. Both Maryland and Indiana played nearly flawless games against the Illini, while the defensive showing against Ohio State at home was much more average (1.02 PPP).

Overall this is a defense that gives up a lot of three-point attempts, doesn’t have much rim protection and doesn’t force many turnovers – all of which should be a recipe for success for this Michigan offense.

Senior wing Malcolm Hill has been nothing short of terrific this year and is on course for an All-Big Ten season. Hill is shooting 48% on twos and 41% on threes for a 53.1 eFG%. He also gets to the free throw line as often as anyone in the Big Ten. He plays out of the pick-and-rolls, face-ups, ISOs and is probably the most complete pure scorer in the conference.

Point guard Tracy Abrams is back for his sixth season after injuries cost him his last two. Early on this year, it appeared that Abrams, a career 30% three-point shooter, might have finally developed a jump shot in non-conference play (he was 25-of-45), but he’s made only 1-of-15 threes in Big Ten games. Still, Abrams is having the most efficient season of his career and it’s great to see him bounce back after tearing his ACL and Achilles in back-to-back seasons.

Maverick Morgan and Mike Thorne split the minutes at the five spot. Both players have size, but Thorne is massive at 6-foot-11, 280 pounds. Morgan is a good rim protector, but he’s really all that the Illini have in that department. Both players will get a few post-ups per game and Morgan is the more efficient of the two on the block as Thorne’s efficiency is dragged down by his 48% free throw percentage.

Starting 6-foot-7 four man Leron Black, not either starting big man, is the best rebounder on the team. Black’s sophomore season was ended due to meniscus surgery and he started this year facing a suspension for pulling a knife on a bouncer last February. He’s an energy guy who is great on both backboards and can finish around the rim. He’s struggled in league play, starting the season 4-of-17 from the floor, but will provide an interesting match-up for Wilson. Wilson has struggled against more versatile combos that can drive and shoot, but Black will give him everything he can handle on the glass and force him to defend ball screens.

Former Michigan recruiting target Jalen Coleman-Lands had a slow start to the season, but he’s heating up in Big Ten play. The 6-foot-3 shooter has made 7-of-15 Big Ten threes after shooting just 31% from deep in non-conference play. Coleman-Lands remains fairly one-dimensional: he’s taken over twice as many threes as twos and averages less than an assist per game.

The two primary options off the bench are 6-foot-3 senior Jaylon Tate in the backcourt and 6-foot-10 sophomore Michael Finke in the frontcourt. Finke is a shooter (he’s attempted more threes than twos) and an offensive rebounder. Tate has been unable to reduce his turnovers or develop a perimeter shot over the last four years. He has a 33.2% turnover rate this year and is 6-of-56 for his career from long distance, but to his credit is a very good distributor.

This is a big game for the wolverines. Two of Michigan’s most winnable road games come early this year and stealing this one at Illinois could be a critical boost for a team trying to find itself. KenPom projects a 66-65 Illinois win, but gives Michigan a 49% shot at the upset.