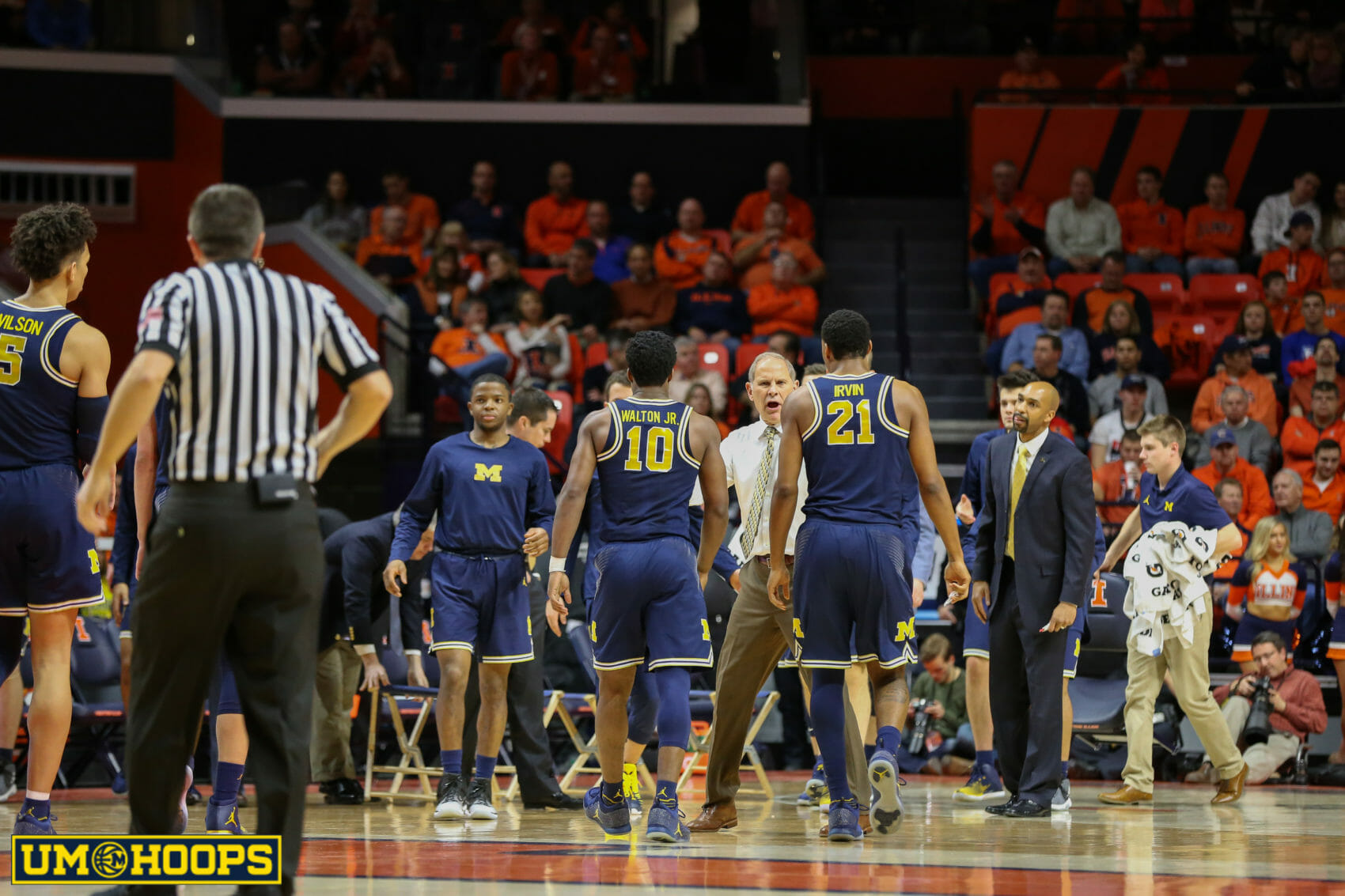 Michigan lost its third Big Ten game in four tries as its defense continued to sink toward rock bottom.

John Beilein spoke this week about a defensive “tape delay” that was causing his team to be a step slow to defensive rotations. On Wednesday night in Champaign, the Wolverines were easily four or five steps slow.

In a battle of two of the worst defenses in the Big Ten, Michigan proved that it had further to fall. Facing an Illinois offense that has been average at best this season, the Wolverines were shredded to the tune of 1.41 points per possession.

If you’ve been following since New Year’s Day, you know the script. Michigan’s ball screen defense was horrendous and the Illini shot a silky smooth 64% (9-of-14) from three-point range in the blowout victory.

For about 15 minutes, Michigan had no trouble keeping pace. The Wolverines were tied 34-34 when Derrick Walton was whistled for an offensive foul and spiked the ball on the floor to draw a technical. The two personal fouls in one play sent Walton to the bench for the final 3:18 of the half and Illinois took control.

Illinois outscored Michigan 15-2 heading into the locker room as the Wolverines failed to close out yet another half. If the technical wasn’t enough, the Wolverines — ranked 5th nationally in free throw percentage — missed the front-end of two separate one-and-one attempts in the final five minutes of the first half.

That was the point when the game ceased to be competitive, but Michigan’s defense was broken from the opening jump.

Michigan’s offense, once again played well enough to win. If you score 1.15 points per possession on the road, you expect to win more games than you lose. The fact that Michigan wasn’t even competitive is a reminder of just how bad the defense was. The Wolverines shot 54% inside the arc and 50% from three-point range while only attempting 27% of their shots from three. With a 59.8 eFG% and a 13.3% turnover rate, the problems were all on the other end of the floor.

There was nothing positive to take away from the defensive performance. Illinois opened the game by posting up against Wilson and Wagner with almost no resistance. From there, the ball screen defense and rotations were horrendous. Michigan guards cheated for steals and gave up layups, Michigan bigs were abused on the glass. There was no rim protection: Illinois made 64% of its twos and the Wolverines didn’t record a single block.

Through four Big Ten games, teams are shooting 57% from three-point range against Michigan. 57% three-point shooting is a remarkable stat for any single game, but it is almost unfathomable for a four game stretch.

It’s so hard to put into words how bad Michigan’s defense has been, but it’s almost even harder to explain how it fell apart this quickly. In November, this team actually looked capable of playing competent defense. Great? Probably not, but competent. They held the No. 16 and the No. 34 offenses in the country (the two best offenses they’ve faced this season other than UCLA) to below a point per possession on a neutral floor. But since conference play began — and after an extended holiday break — the Wolverines have been terrible on the defensive end of the floor.

How bad? The Wolverines have allowed 317 points in 258 Big Ten possessions — that’s 1.23 points per trip. They’ve managed that woeful feat against offenses ranked 61st, 169th, 70th and 75th nationally. Michigan isn’t running into Indiana or UCLA-style offensive juggernauts here, its running into teams that are simply average on that side of the ball.

Michigan has had some bad defenses during John Beilein’s time in Ann Arbor, but I can only remember one defensive stretch that was this bad: the 1-6 Big Ten start to the 2010-11 Big Ten season. The Wolverines allowed 1.22 points per possession in their first 7 Big Ten games that year and that was supposed to be the rock bottom moment that turned the program around for good and was never spoken about again.

Right now, it’s hard to argue that Michigan isn’t right back where it was in late January of 2011. Now the question is who or what is going to change it? Back then, it was a couple of fiery speeches from Zack Novak that turned things around (that team never allowed more than 1.12 PPP against until its tournament loss to Duke), but what  is going to right the ship this year? Your guess is as good as mine.

There are so many problems with Michigan’s defense that some are clearly fixable and obviously others that aren’t. Michigan doesn’t have the personnel to be a great defensive team, but personnel isn’t everything on the defensive side of the ball. This group is plagued with so many issues between the ears and on the white board that they almost appear to be lost in space — at least some of those issues are fixable.

The path to winning 9 or 10 games and making the NCAA Tournament looks a lot tougher than it did two weeks ago. Sitting at 1-3, Michigan has its work cut out for it going forward starting with a home game against Nebraska. If the ball screen defense isn’t any better by then, it could be a long afternoon at Crisler.