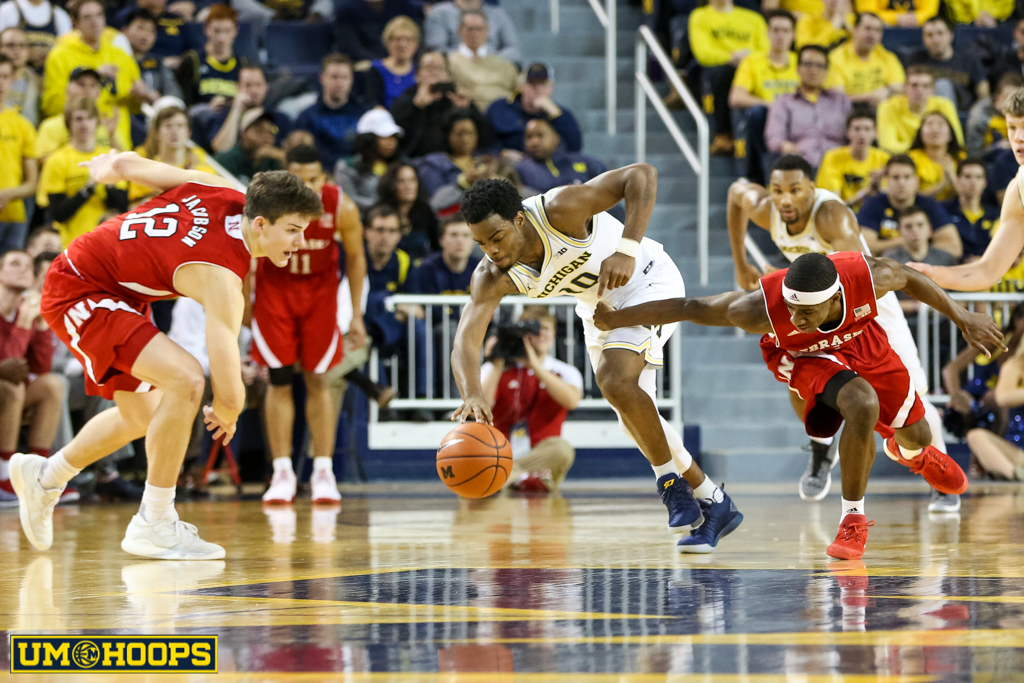 One answer for terrible defense is perfect offense.

One answer for terrible defense is perfect offense.

The Wolverines 1.22 points pr possession on defense — right in line with their league-worst average — but this time they scored 1.3 points per trip and won the game. Michigan knows it won’t be able to execute this game plan every night, but it’ll take the much-needed win on its home floor and move on.

Despite yet another porous defensive performance, the Wolverines deserve credit for matching the Huskers shot for shot. Michigan led the game wire-to-wire, never led by more than 10 points, but had an answer every time that Nebraska made a run.

Offensively, there weren’t many poor performances across the board. Three Wolverines– Derrick Walton, Moritz Wagner and Zak Irvin –notched at least 20 points on better than a point per shot while DJ Wilson added 11 of 3-of-4 perimeter shooting.

Michigan was almost flawless offensively. This was its best offensive performance in a Big Ten game since March 4th, 2014 when Michigan clinched the Big Ten at Illinois. Of course that was a 31-point blowout.

Scoring points is not a problem for this team by any stretch of the imagination and Beilein seemed to win the battle of (offensive) in-game adjustments against Tim Miles. (For what it’s worth, stopping U-M has been a consistent problem for Nebraska. Michigan has scored 1.19 points per possession over the course of its 6 Big Ten games against the Huskers)

Early on Nebraska was leaving Moe Wagner in the pick-and-pop action and Michigan dialed him up time and again. Midway through the second half, the Huskers went heavy with the 1-3-1 zone and Derrick Walton hit big shots to force the zone onto the shelf. Late, Nebraska went to a switching man-to-man that the Wolverines answered one more time by attacking and getting to the line.

Free throws also played a significant role in the final result. Michigan shot 30 free throws to Nebraska’s 5 and made 26 of them. Many of those free throws were late as the Huskers tried to extend the game, but the Wolverines only missed one freebie in the clutch. Michigan also got into the bonus early in the second half and was able to take advantage, even hitting the front-end of its one-and-ones.

But it all comes back to defense with this group and it’s going to until they figure out to play any semblance of it. Michigan gave up 1.22 points per possession and won — something they’ve done in the Big Ten twice under John Beilein, both in 2014 against Michigan State and Indiana. Defense is still a problem and nothing in this game proved otherwise.

This was Nebraska’s best offensive game of the season. Now in four of its five Big Ten games, Michigan played one of the three worst defensive performances against their respective opponents. That’s saying something considering the number of guarantee games these teams play.

Tai Webster and Glynn Watson Jr. are great players — they are lighting up most of the Big Ten — but Michigan looked almost hopeless stopping them in isolation and ball screen situations as they combined for 50 points on 21-of-35 (5-of-10 3pt) shooting. Michigan experimented with some different ball screen coverages in the second half, moving from a traditional hedge to ICE-ing more pick-and-rolls which seemed to make the difference late. We’ll dive more into the ball screen defense in earnest this week.

Michigan needed this win for every reason imaginable, but the the defense still isn’t fixed. A road trip to the Kohl Center probably isn’t the answer for a slumping defense, but the games have to be played and this should be a spark of confidence for a team that was routed in Champaign a few days ago.