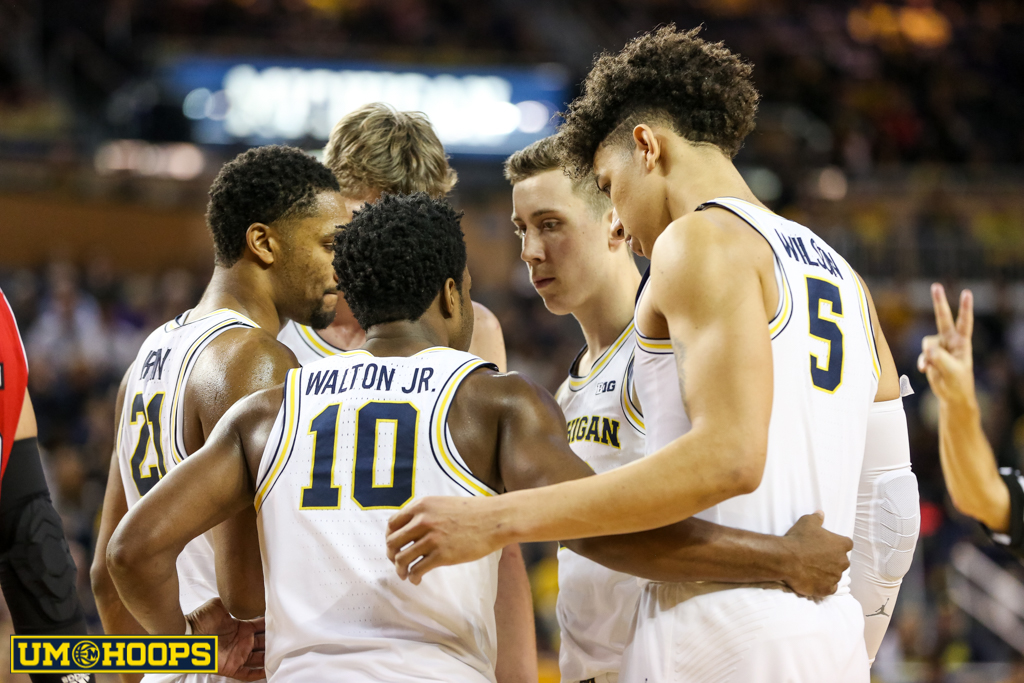 Derrick Walton, not known for being vocal, called a players-only meeting and reminded his teammates of their potential.

If Saturday’s win over Nebraska does prove to be a turning point for the Wolverines this season, they can thank Maverick Morgan. Far from a household name in the Big Ten, the Illinois senior center angered and inspired Michigan when he called it a “white-collar team” after Wednesday’s match-up.

The slight was part of the reason Derrick Walton called a players-only meeting on Friday night. In preparation for the afternoon game, the team stayed in a hotel on Friday. Walton, a co-captain who typically leads by example and not with gestures or shouts, gathered his teammates in his room around 9:00 p.m. and reminded them that the coaches can only do so much:

Every player, even freshman Xavier Simpson, said something. Zak Irvin estimated the meeting lasted between 15 and 30 minutes. Said Walton: “We got input from each and every guy and that’s what made it so powerful.”

Irvin, the other captain, said that after the Illinois loss dropped Michigan to 1-3 in the Big Ten, “We just weren’t happy with the way we were playing.” The meeting allowed the team to “hit the restart button” on the season.

Walton wanted his teammates to know he thinks this team has not come close to its potential. “It’s time to buckle down and get it done no matter what the scheme is…crawl, scratch, fight. Whatever it takes, just start making things happen.”

The senior point guard certainly made things happen late against Nebraska, scoring 16 of his 20 points in the final 7:25 of the game. He recorded a steal, drained two threes (and another jumper with his foot on the line), and drove to the hoop to insure Michigan got a much-needed victory.

Walton and DJ Wilson were on the bench together just before that final stretch, and Wilson said Walton was frustrated with his performance to that point. They re-entered the game and Walton told the team, “Give me the ball. Give me the ball. I’ve got this.”

Walton tries to be aggressive from the opening tip but doesn’t want to force the issue offensively, even if his coach wishes he would hunt shots more. “As you could see, Moe (Wagner) had it going and we kept feeding him,” Walton said of his teammate’s 23-point performance. “When he got down a little bit I thought I could catch a little fire myself.”

That he did, but the fire was first lit on Wednesday in Illinois. In Walton’s final statement with the media on Saturday, he went out of his way to reiterate what some of his teammates had said the day before.

“The white-collar comment that was made, we didn’t take that lightly. When we heard that, that’s basically attacking us personally. The white-collar comment that was made by an Illinois player really ticked this team off. We’re excited to get them back again soon. Today we just wanted to be a lot more aggressive going to the basket and show we’re a blue-collar team.”

John Beilein can count on his players having an extra bounce in their steps at practice before Tuesday’s game at Wisconsin. And they’ve made it clear they’ll be fired up for a rematch with Morgan and Illinois next Saturday. They can’t, however, ignore their flaws.

The player meeting comes off as galvanizing because Michigan did the most important thing Saturday: win the game. But, if anything, you’d think a blue-collar team would rebound and defend, and Michigan struggled to do either against Nebraska. The Wolverines got enough stops to win, but only because the offense was so efficient.

Michigan knows it can’t simply shoot its way to victory every game. But it worked against Nebraska, and may have to again as the blue-collar mentality continues to take hold.