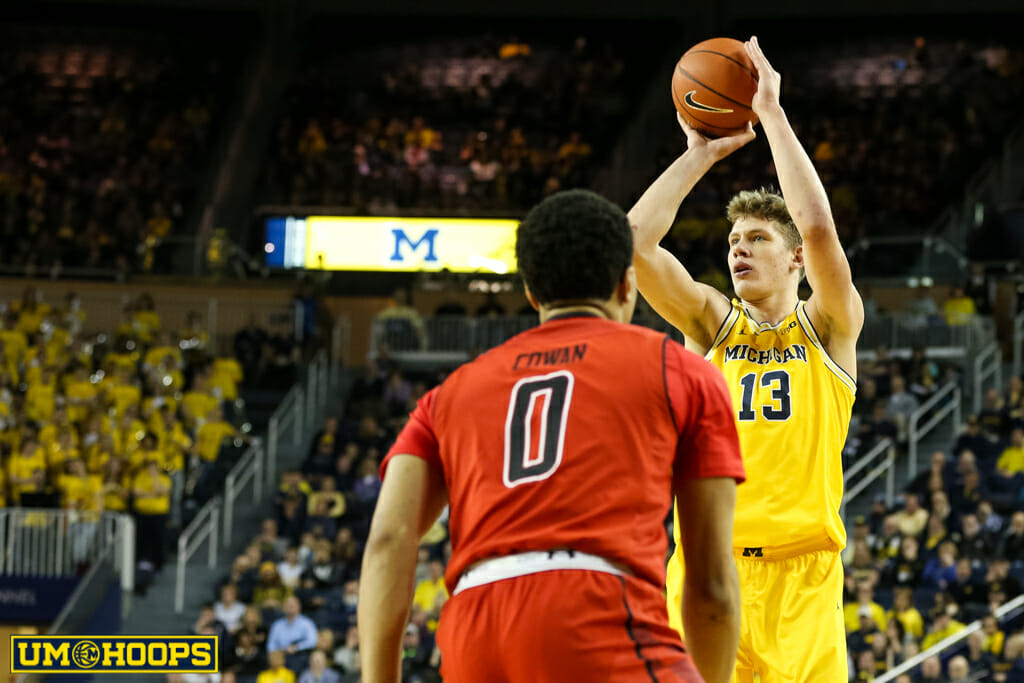 Can Moe Wagner be Beilein’s next Kevin Pittsnogle? Plus, defending Wisconsin and not being afraid to foul.

John Beilein relayed assistant coach Billy Donlon’s opening statement to the M Club today: Donlon joked that Donald Trump had removed him from consideration for the Secretary of Defense. Michigan is ranked 185th in the country in defensive efficiency. Despite the win Saturday, Michigan did not have a good defensive performance against Nebraska. There’s not much reason to think Tuesday against Wisconsin will be much different.

For one, the Badgers have a top 20 offense. Secondly, Beilein said rest is the priority over improvement right now, given the schedule. After Wisconsin, the schedule gets into more of a consistent pattern that will allow Michigan to practice more.

One thing the Wolverines have been working on is being more physical defensively. They do not foul often, which is standard for Beilein’s teams; only eight teams in the country foul less per possession. Of course, simply fouling more would not solve Michigan’s problems. But when teams are driving to the basket with ease, taking more risks—bumping a penetrator with your chest, attempting to block a shot at the rim—in the hopes of getting more stops could be advantageous.

“We’ve gone the other way with a couple of our guys that they virtually never foul and instead give up layups,” Beilein said. “That’s a tough thing. Mark (Donnal) and Moe (Wagner) and DJ (Wilson) have been foul prone in the past. Now they’re not. That’s not necessarily good. Just being more physical and taking that chance. … When a guy’s shooting the ball and you’re really physical with him and get a foul, big deal. But you just can’t sit and watch a guy shoot.”

Although Derrick Walton has gotten into some first half foul trouble the last couple of games, he and Zak Irvin each commit fewer than two fouls per 40 minutes. Too many of Wagner’s fouls are cheap, where his man isn’t in the act of shooting. Wilson has been charged with just one foul total over the past three games.

It’s a fine line, and Beilein—who favors skill over brawn in recruiting to begin with—has said developing physical play is a two-step process: First, the players have to get stronger. Secondly, they have to realize they’re stronger.

“You used to be skinny, you used to be weak. You’re not anymore,” Beilein reminds his players. “So you can play like it.”

Wagner agrees. “I think in general the physical thing has a lot to do with mindset rather than just gaining weight and body development,”he said. “It just takes some time to understand what you can do with your body and how to be physical without fouling. I’m obviously still in the process of that.”

Wisconsin is a veteran team that plays really well together. Like Michigan, the Badgers often have several shooters on the floor. A key difference is that Wisconsin has a major low-post threat in Ethan Happ. The redshirt sophomore was a 6’2″ point guard his first year of high school; now he’s 6’10” and plays with his back to the basket. He’s got great footwork and can pass out of the post.

“What (Wisconsin does) better than anybody is post up at every position and play out of the post up,” Beilein said. “Even what I call the LeBron post-up: catching it at the three (point line) and just dribble the guy back in. Everybody is an elite passer.”

Guarding the four-out, one-in offense with hard-charging slashers and/or multiple shooters is not easy, but at least it’s familiar. Wisconsin “puts you in positions you’re never in,” Beilein said, because the ball is often behind the help defender.

“When the ball is behind you, it’s hard to defend the ball and the perimeter. They put you in that all day long.”

The Wolverines’ bad defensive habits—leaving their feet too often, closing out off balance—figure to be severely tested at Kohl Center.

Moe Wagner has heard Beilein talk about Kevin Pittsnogle, but he couldn’t tell you that the three-point shooting big man played for West Virginia. After the Nebraska game, Beilein said he’s been asking himself a lot lately whether he’s ready to give Wagner a Pittsnogle-like role. Wagner has been effective when Michigan has run plays for him, and going to him more often could open up new things for the offense, according to Beilein.

Michigan has not had a big man who could shoot from outside in several years, so this wasn’t part of the offense.

Beilein was adamant about developing Wagner from the inside out—he wants a big man who can shoot, not a shooter who plays big man—and has to remind Wagner and Wilson to not let outside shooting take away from their practice time in the post.

Walton and Irvin are still going to have the ball in their hands in crunch time, but Beilein and the senior captains have no problem letting the bigs shoot if the defense allows it.