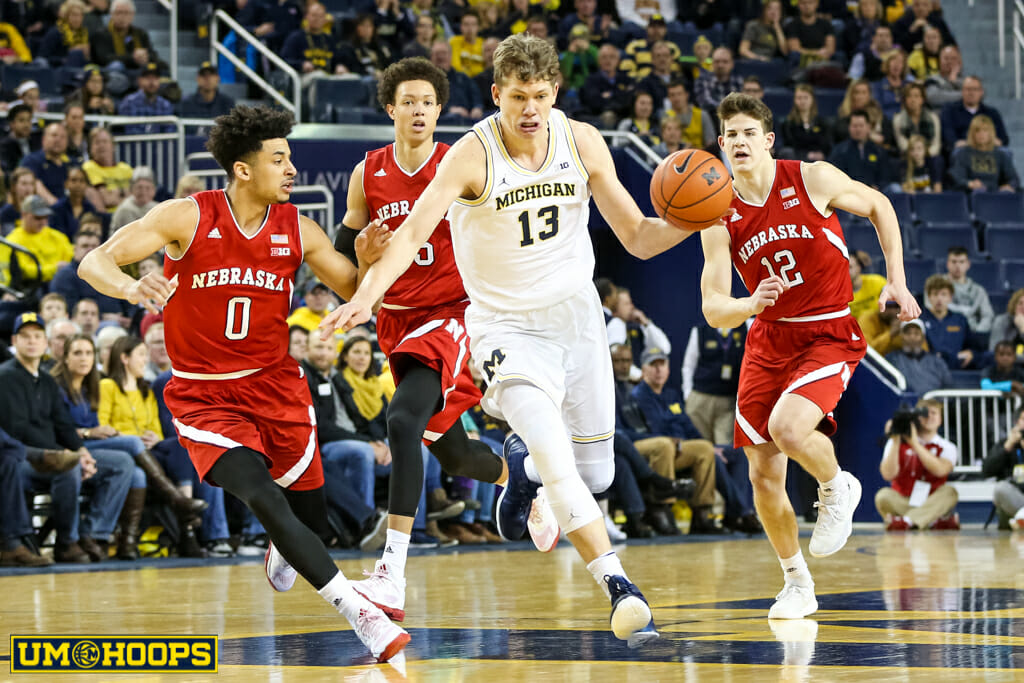 Michigan’s defense is broken. At this point, no one is going to debate that simple fact.

Michigan’s defense is broken. At this point, no one is going to debate that simple fact. The Wolverines have fallen nearly 100 spots in KenPom adjusted defensive efficiency metric, checking in at No. 185 at the time of publishing.

That’s 90 spots behind where the Wolverines finished the season last year and they have the worst defense in the Big ten by almost .1 points per possession.

What’s wrong with the Michigan defense? Obviously there are a lot of issues, but we broke down some of the numbers to take a closer look at where the Wolverines are struggling.

Michigan’s pick-and-roll defense has completely fallen apart. In the last six games, the Wolverines have allowed .986 points per possession (including pass outs) in the pick-and-roll game. Compared to seasonal numbers across Division I, that would rank 336th nationally.

Is there an answer to Michigan’s pick-and-roll woes? There are many different ways to defend the ball screen, but they all give up something. Good ball screen defenses usually adopt a strategy that can funnel ball screens into one of their strengths. For Michigan, I’m not sure what that would be.

Michigan’s base ball screen defense has been a standard hedge, although in actuality it’s more of a show. Against Nebraska, the Wolverines tried to ‘ICE’ more ball screens, forcing the ball handled to reject the pick and using the baseline as an additional defender.

Going back through and watching some film from the last few games, it seems like Michigan’s issues are much more executional than strategic.

Whatever the Wolverines choose to do, they are making mistakes. There have been several instances where the ball handler splits Michigan’s hedge, others where the big man recovers late, but the majority of the issues are that the other 3 players on the floor aren’t getting it done either. If the help is there, it struggles to recover to pass outs and easy straight line drives. Other times, the help isn’t there  at the rim and results in an easy layup.

Thanks to Krossover, we can look at Michigan’s defensive shot chart from Big Ten games only. The immediate obvious concern is that teams are making a ridiculous number of their jumpshots against the Wolverines.

Teams have a 62 eFG% on all contested shots against Michigan and a 64 eFG% on uncontested jumpers — meaning it hasn’t really mattered whether the Wolverines are almost getting a hand up or not. Jump shots are just always falling against the Wolverines.

Ken Pomeroy has written pretty extensively about three-point defense and whether the percentage allowed could have at least some factor of luck. When the same thing happens six games in a row, it doesn’t feel like luck. There’s no denying that Michigan’s doing a poor job of contesting shots, opponents feel comfortable shooting against the Wolverines, and opponents are making their shots. But I still think there’s at least an element of luck that most of these teams wouldn’t shoot 50% from three in a walk through if they had the opportunity.

Is zone defense a fix?

It’s a natural intuition: If man-to-man defense isn’t working… try a zone! Michigan has tried zone defense, it has promptly been shot right out of it.

The Wolverines have played 23 possessions of zone defense in 2016-17, per Synergy, and they’ve allowed 27 points.

Michigan actually got four stops out of the zone — all in the 2-3 — against Nebraska, but before that the last missed shot that the Wolverines forced out of zone defense was back in November at South Carolina. They also still gave up five baskets out of zone looks against the Huskers.

If Michigan is going to play a zone, I think the 2-3 zone is the answer. The extended 1-3-1 zone isn’t helping anyone because the Wolverines don’t have the length to force turnovers or the quickness to keep people out of the paint. It has been far too easy for an opposing point guard to dribble at the middle of the zone and slice right at the big man to the hoop.

The other dynamic at play is the continued effect of rule changes on the college game. Both Tim Mile, John Beilein and Michigan point guard Derrick Walton mentioned defensive rule changes in their post-game press conference on Saturday afternoon.

Walton focused on the tendency of referees to call fouls on the perimeter and how that is causing the Wolverines to struggle against dribble penetration.

“The new rules,” Walton said when asked about the difficulty of playing perimeter defense in the college game. “It’s kind of hard to guard guys when they’re coming at you full speed because everything is a foul. It’s hard to keep your man in front of you.”

You can certainly see this ‘playing not to foul’ mentality at times in Michigan’s defense. Redshirt sophomore DJ Wilson was one of Michigan’s better defenders and rebounders early on this year, but he’s seemed to regress on that side of the ball. He’s struggling to keep drivers in front of him and his rim protection has regressed.

Wilson has only committed 3 fouls in the last four games and his shot blocking and rebounding numbers have both taken a step back in league play. I don’t mean to single Wilson out because he’s the only Wolverine who lacks aggression on the defensive end, but because he’s the one player on the roster with the ability to emerge as a legitimate rim protection option.

Is there a solution?

There are no easy fixes, otherwise we probably would have seen them already.

Michigan has physical limitations on the defensive side of the ball, but there’s also no reason that the defense should be this bad. The Wolverines need to figure out their ball screen coverages and improve their rotations if they want the season to go anywhere.

“We’ve got to find these little steps to try and get better,” John Beilein said on Saturday. “Since the four-day break, (Wisconsin will be our sixth game). It’s hard to change your philosophy when you’re just trying to get rest.”

While Michigan might not be able to make sweeping changes in the 2 or 3 days between Big Ten games, it does need to figure out how it can make incremental improvement to its pick-and-roll defense.

Through three weeks of conference play, Michigan has the league’s best offense and the worst defense. A few notable gains on the defensive end of the floor and things could really start to fall into place. A few more games where the defense struggles to get a stop and the season will start to feel like a season that wasted a spectacular offense.