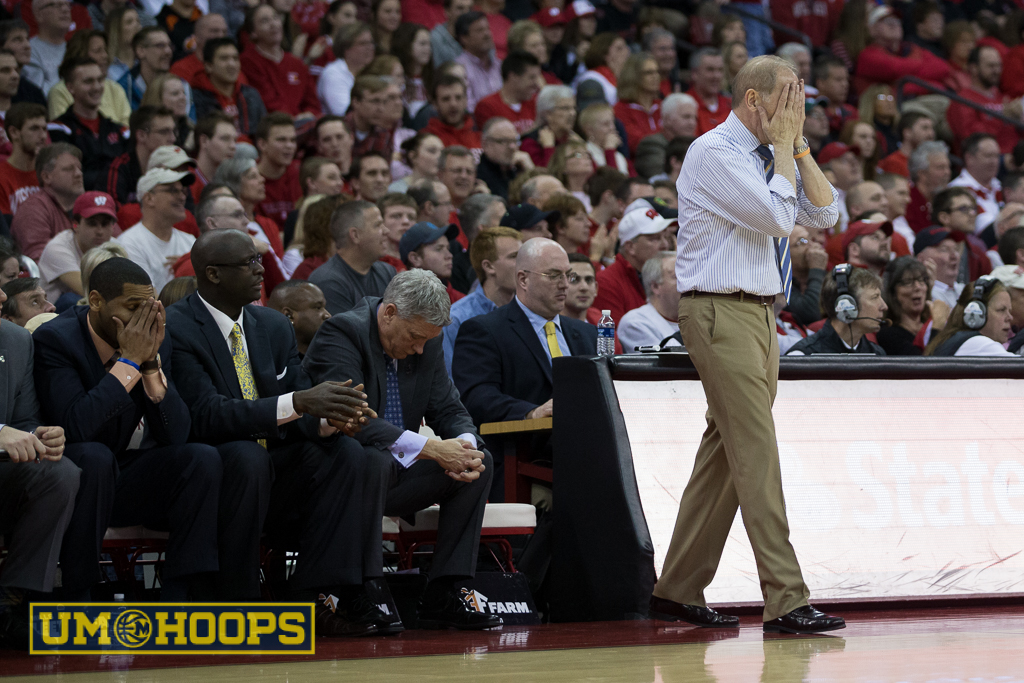 Michigan heads to Wisconsin tonight in search of its first win at the Kohl Center since 2014.

A trip to Madison, WI is the last thing that Michigan wants to see during its rocky start to the Big Ten season. The Badgers have dominated the head-to-head series against the Wolverines under John Beilein and appear to be the best team in the league by a significant margin this year.

Wisconsin hasn’t missed a beat under Greg Gard, now in his first full season, as he turned around last season and now has Wisconsin at 14-3 (3-1 Big Ten) and in position to win the league. The Badgers have lost some of their most difficult tests this year — at Creighton, vs. UNC and at Purdue — but they still have some quality wins, including earlier this month at Indiana.

The Badgers have the No. 3 offense (1.14 PPP) and No. 6 defense (.98 PPP) in the league to this point, with their season-long numbers ranking in the top-20 nationally on both ends of the floor. On paper, this is the best team in the league.

The bad news for Michigan’s faltering defense is that Wisconsin’s offense is great, one of the best in the league. The good news is that the Badgers don’t run nearly as many ball screens as the teams that the Wolverines have seen lately like Illinois and Nebraska. Wisconsin posts up more than any team in the conference other than Purdue and is actually more efficient on the low block than the rest of the league despite the high volume.

The Badgers are the 19th best 2-point shooting team in the country, but they have made just 48% of their twos in Big Ten play (10th). That hasn’t been a major issue up to this point because they’ve rebounded a Big Ten-best 37.1% of their missed shots.

Wisconsin’s defense under Greg Gard has started forcing turnovers and leads the Big Ten in that stat. Big Ten foes are giving the ball away on 22.6% of their offensive possessions against the Badgers this year. Wisconsin is ranked just 11th in defensive rebounding in conference play, despite ranking 5th nationally on the defensive glass. That’s probably a product of playing Rutgers, Indiana and Purdue early on this season and a stat that should correct itself.

People like to talk about Purdue’s Caleb Swanigan like he’s a lock for Big Ten Player of the Year honors, but you can make a pretty strong case for Wisconsin big man Ethan Happ. Happ does everything that you expect from a normal big man — score in the low post, clean up the defensive glass, draw fouls, etc. — but he’s also Wisconsin’s best assist man and leads the conference in steal rate.

Despite Happ’s unique versatility, he attempts almost all of his shots within 5 feet of the basket. His footwork is so good that he can get to his spots from basically anywhere and he’s efficient around the cup.

Last year Nigel Hayes caught a lot of flack from just about everyone as his efficiency numbers dropped. This year has been something of a bounce back year for the 6-foot-8 senior. He’s making 52% of his twos and 33% of his threes, but he’s shooting fewer threes. He’s also great at drawing fouls (50 FTA per 100 FGA) and one of Wisconsin’s better passers.

6-foot-3 point guard Bronson Koenig is one of the best scoring point guards in the league. He has a terrific pull-up jump shot and seems to always make big plays, but he’s not a typical point guard. He’s not a playmaker for others (6 assists in 4 Big Ten games), but he’s made 13-of-21 Big Ten threes.

6-foot-3 senior Zak Showalter is a three-and-d guy for the Badgers. He is one of the best athletes on the roster and makes 67% of his twos and 35% of his threes. He’s not a volume shooter, but all of his shots are either three-pointers or shots at the rim.

6-foot-8 big man Vitto Brown starts alongside Happ and Hayes and is a shooting threat on the perimeter. Brown shoots more threes than twos and connects on 34% of his long range efforts.

Freshman point guard D’Mitrik Trice learned a thing or two about hitting big shots from his brother and is making 54% (20-of-37) of his three-point shots this season. 6-foot-5 sophomore Khalil Iverson joins him off the bench and is a lengthy wing who provides rim protection, steals and offensive rebounding at 6-foot-5.

Michigan has been favored in its first five games and that obviously won’t be the case in Madison. Maybe this is one of those cases where the Wolverines can just go out and play and put together a great performance, but it’s an incredibly difficult match-up against a program that has dominated the head-to-head series. KenPom projects a 69-59 Badger victory, giving Michigan at 17% chance of the road upset.