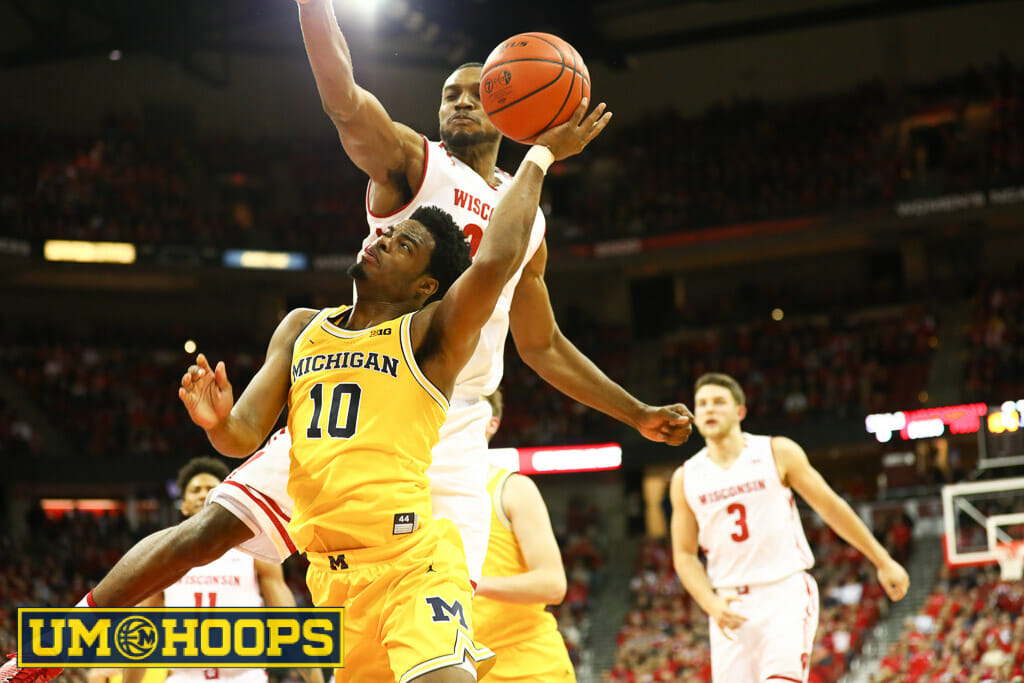 Michigan showed signs of life on Tuesday night, but let a 6-point lead slip away in the final 6 minutes at Wisconsin.

You don’t go into the Kohl Center and leave with a win without making a few of your own breaks in the process. Michigan learned that lesson the hard way on Tuesday night.

The Wolverines made plenty of big shots and big plays on the road against the Big Ten’s best, but old habits, key mistakes, bad breaks and Bronson Koenig were just too much to overcome down the stretch. Michigan was the better team for 34 minutes, but the Badgers won the final 6.

The Wolverines led throughout much of the second half after opening the period on a 17-2 run. Back-to-back threes helped the Wolverines surge into a 49-43 lead with 6:29 to play and forced a Wisconsin timeout. Then Bronson Koenig came alive and took over the game. The Wisconsin senior scored 10 of Wisconsin’s next 12 points as the Badgers rattled off a 15-0 run to seize control of the game.

Yes — there were an array of plays and calls that didn’t quite seem to go Michigan’s way. Wisconsin was in the bonus for the final 14:29 of the game after a first half that featured only 10 fouls total. Xavier Simpson’s late steal never did appear to go out of bounds as was called and it wasn’t reviewed. It’s easy to come up with a list of gripes after any game on the road in the Big Ten, especially in Madison, but the chance was there for Michigan to make winning plays down the stretch.

Even after everything that happened, the Wolverines had that late 6-point lead. The opportunity was there, they just didn’t take it.

There was still progress for a team that was wiped off the floor in Champaign last week to prove that they can play at least some defense and compete with the league’s best team. But it’s still not enough. The critical mistakes that have plagued Michigan this year were still present: an offensive rebound on a free throw that led to a four-point possession, a late missed front-end, a turnover on an offensive inbound play, helping off of Bronson Koenig late.

Those mistakes aren’t new and Michigan couldn’t avoid them for 40 minutes.

“Up six with six to go: I’ve seen that movie before,” John Beilein said after the loss. “They did a great job down the stretch. We did not make some shots, they made some shots and that’s the story.”

Michigan’s offense sputtered along in the first half, but came to life in the second. As encouraging as it was to score 43 points on 31 second half possessions against the Badgers (1.38 PPP), scoring .69 points per trip in the first half was equally discouraging. For all of the great offensive moments — Zak Irvin played a great game, Duncan Robinson — there were those moments where the Wolverine offense just let a few too many possessions get away.

Give Michigan’s defense some credit, they got down and really defended better than they have for weeks. Wisconsin eventually pulled over a point per possession, but even the 1.08 points per trip that Michigan allowed was its second best defensive performance of the Big Ten season (and Wisconsin’s second-worst offensive performance in league play). Wisconsin relentlessly pounded the ball into the post and the Wolverines provided more resistance than I thought they had in them, holding the Badgers to 49% two-point shooting. Michigan also held up on the glass, rebounding 77% of Wisconsin’s missed shots on the night.

The biggest difference defensively was Wisconsin’s ability to draw fouls and get to the free throw line. Three Wolverines fouled out and the Badgers shot 24 free throws to 53 field goal attempts, although 12 were off of late intentional fouls. That difference at the line could have been an even bigger difference, but the Badgers made only 14-of-24 freebies.

John Beilein’s history at Michigan is littered with frustrating games just like this one against Wisconsin. He’s now 2-18 against the Badgers and this one might not have been as maddeningly painful of a loss as some others, but it certainly cracks the top-10 script.

The hope has to be that the Wolverines proved to themselves that they are capable of playing with just about anyone in this conference and learned a thing or two about what it takes to win down the stretch. Next up, a rematch with the Illinois team that throttled them and called them ‘white collar’ and that is dramatically worse on the road.