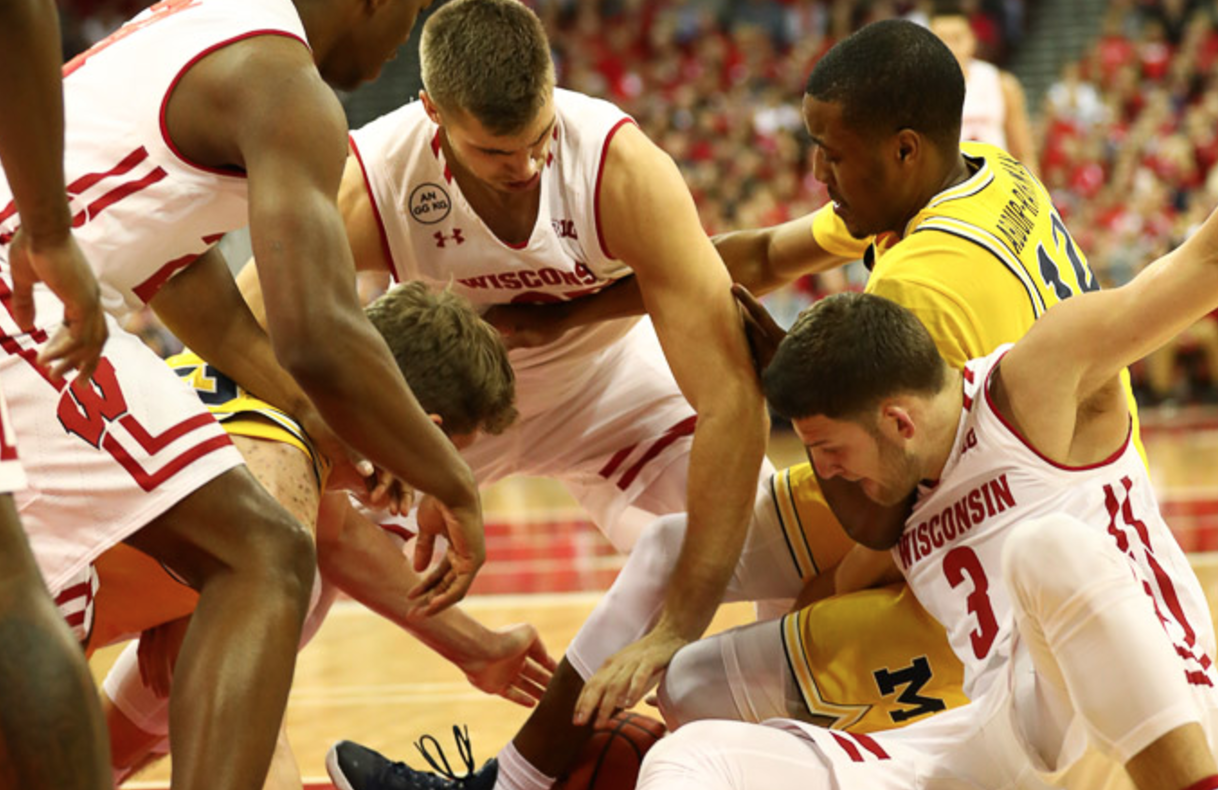 “We didn’t really care about whether we make a run or not,” Wagner said. “For us, what’s important is just to keep getting stops and we know that we going to get going eventually. So we just told ourselves to keep going, keep going and eventually shots will fall.”

MADISON, Wis. — They call it an “elevator” screen. It was installed in Wisconsin’s offense just two days ago — though the Badgers had used it occasionally last season — and that was the play Greg Gard decided to run for his senior point guard, Bronson Koenig, with the game tied at 49.

Michigan wasn’t expecting the call. John Beilein said as much after the game when he admitted he hadn’t seen the play on film.

And the Wolverines’ lack of preparation showed: Duncan Robinson, Derrick Walton Jr. and Moritz Wagner could only watch Koenig’s shot, hands outstretched helplessly, as they were screened behind a trio of Badgers.

Was there ever any question that Koenig would drain the shot? At this arena, in front of this crowd, against a program that was just 1-12 its past 13 games here?

The Wisconsin bench would say no — they rose, hands in the air, before the shot had even traveled halfway to the basket.

It was the biggest shot in a game full of them, giving the home team a lead it would not give up. The play summed up Michigan’s defensive effort, as well: improved, but not quite there yet.

Through the first five games of conference play, Michigan’s defense had sunk to new lows, allowing opponents to shoot over 50 percent on both twos and threes.

Yet, after the first 27 minutes, the Wolverines looked like a different team on defense.

They limited missed assignments and made defensive rotations on time. A feat that they couldn’t claim in any of the previous five games. They kept Koenig and forward Nigel Hayes quiet. They harassed Ethan Happ and held him to 11 points on 13 shots and 3 turnovers. And then, most impressively, they translated that effort into success on the other end, going on a 17-2 run early in the second half after scoring just two points in the final 7:11 of the first half.

“… We didn’t really care about whether we make a run or not,” Wagner said. “For us, what’s important is just to keep getting stops and we know that we going to get going eventually. So we just told ourselves to keep going, keep going and eventually shots will fall.”

The defensive improvement, it seemed, was the cure-all for Michigan’s struggles.

But it disappeared just as soon as it had arrived, leaving the Wolverines at the mercy of Koenig, who had a personal 10-0 run.

“They ran an elevator play to get him open in the middle,” Beilein said. “And then the last one, we’re not supposed to get help off him, and we made that mistake. So you just can’t give him that type of room to get that done.”

Part of the late letdown was because of the foul trouble that Michigan’s big men found themselves in. With 8:16 left, Wilson and Wagner had already picked up their fourth fouls, limiting both their playing time and their aggressiveness on defense when they were in the game.

“… It obviously doesn’t help us,” Wagner said of the foul trouble. “We’ve got to find a way to be physical without fouling, especially in the second half. I think there was a four-minute battle where we just gave up too many easy foul calls in the post and rebounds and stuff like that.”

Foul trouble and unexpected play calls aside, the Wolverines could not get the stops they needed down the stretch. That included a couple possessions when Wisconsin scored after rebounding a missed free throw, an inexcusable lapse.

And those late shortcomings, despite the earlier improvement, is what Michigan will be thinking about on its flight back to Ann Arbor.

“…Obviously, they made some tough shots late – (Koenig) got it going, (Hayes) had a shot as well,” Irvin said. “It was those last six minutes where we just got to be able to grow from that.”