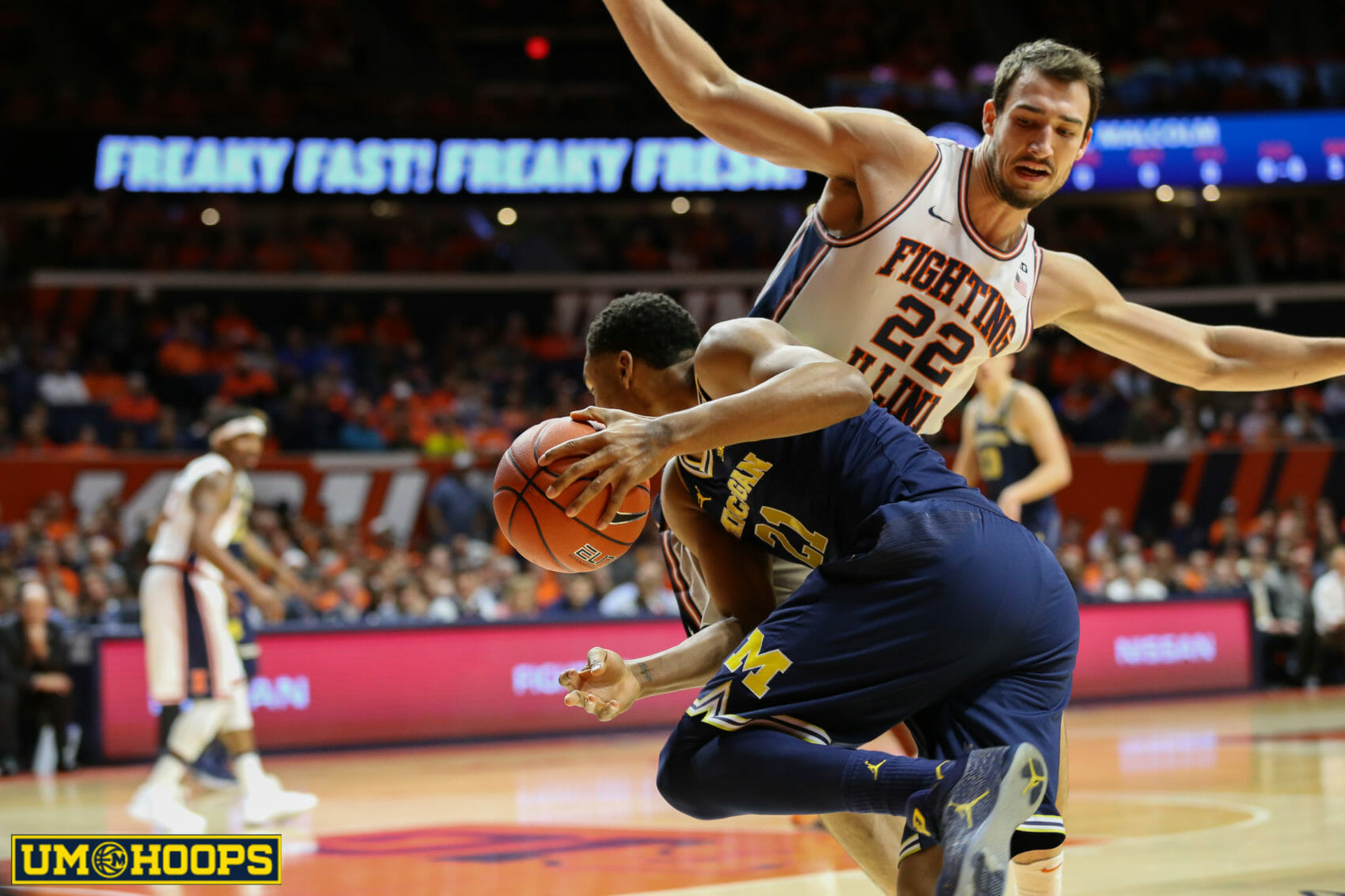 Less than two weeks after a humbling blow out loss at Illinois, the Wolverines host the Illini at the Crisler Center on Saturday.

Less than two weeks after a humbling blow out loss at Illinois, the Wolverines host the Illini at the Crisler Center on Saturday.

Much of the talk coming out of that game surrounded the word ‘white collar’ and the truth is that it just might have been rock bottom for the Michigan defense. On the other hand, Illinois appears to be a completely different team when it leaves the friendly confines of the State Farm Center.

The Illini are 2-1 on their home floor in league play, beating Ohio State and Michigan and dropping a close game to Maryland. They are 0-3 on the road, losing three games by a combined 64 points. Big Ten opponents have scored 1.28 points per possession in Illini road games, all of which have been blowouts.

For Michigan, there’s no more next game to figure things out. The Wolverines need to start winning games, especially at home, and that process starts on Saturday afternoon at the Crisler Center.

It’s hard to write this preview without going back to just how brutal Michigan’s performance was in Champaign. The Illini rattled off their best offensive performance of the season (actually their best of the past two seasons) and beat the Wolverines emphatically. But at the same time, Michigan still scored 1.15 points per trip in the blowout loss and the game was really lost in one fateful stretch late in the first half.

Bad defense has been a hallmark of the Illini this season. John Groce’s team is allowing 1.16 points per trip in Big Ten games — worse than everyone in the league other than the Wolverines. Conference teams are shooting 58.2% inside the arc against Illinois, worst in the Big Ten, while making 39.8% of their threes (10th). The Illini don’t force many turnovers (16% of possessions) and have been foul prone (10th), but do a good job of cleaning up the defensive glass.

Offensively, Illinois checks in at 9th in the league. The Illini value the basketball (turnovers on 15% of possessions) and get to the free throw line (33.5 FTA/FGA), but the shooting has come and gone. Illinois is shooting 49.6% (7th) from two and 31.5% (11th) from three on the season. They made 9-of-14 threes against Michigan, but haven’t topped 35% from three in another Big Ten game.

Malcolm Hill had a relatively quiet but efficient performance against Michigan (15 points on 8 shot attempts), but he’s capable of much more. Hill scores at all three levels and draws fouls as well as anyone in the league. His three-point stroke has been slumping in Big Ten play at just 22%.

Starting shooting guard Jalen Coleman-Lands lit up Michigan for four threes, but he’s a streaky shooter. He’s at 43% in Big Ten games, but has made just 4 of his last 15. He’s a guy that you have to run off the line because he’s shooting just 35% inside the arc.

Big man Maverick Morgan was slotted into the starting lineup against Michigan and made 8-of-9 shots from the floor. He’s shooting 60% from the floor and has reached double figures in all five Big Ten games.

Four man Leron Black is great on both backboards and really had his way with DJ Wilson. Wilson got his points too, but Black was overpowering and even knocked in a couple of mid-range jumpers. The 16-footer is in his arsenal from the baselines and he’s made 3 of his last 7 threes after missing his first 7 this year.

6th-year point guard Tracy Abrams starts at the one. He’s 1-of-19 from three in Big Ten play and is shooting 41% inside the arc. He’s a sub-30% career three-point shooter, but he had made 25-of-45 threes in non-conference play.

Jaylon Tate has all but been phased out of the rotation at this point for freshman point guard Te’Jon Lucas. Lucas played the best game of his career against Michigan — finishing with 5 points and 8 assists — and seemed to catch the Wolverines off guard.

6-foot-6 freshman Kipper Nichols came off the bench and grabbed 8 rebounds (5 offensive) in 19 minutes against the Wolverines. He had only played 16 minutes all season before that stretch, but he’s only scored 1 point in the last two games.

6-foot-10 stretch big man Michael Finke played all of Illinois’ minutes off the bench at the five against Michigan and he’s making over 50% of his threes in Big Ten play.

It’s too early for must-wins, but I’m not sure where Michigan goes from here if it can’t beat Illinois at home on Saturday. Defending homecourt — four of the next five are at home — is paramount to a successful season and this is a chance for the Wolverines to jumpstart their season or fall further behind. KenPom projects a 72-65 Wolverine win, giving Illinois a 28% shot at a road upset.