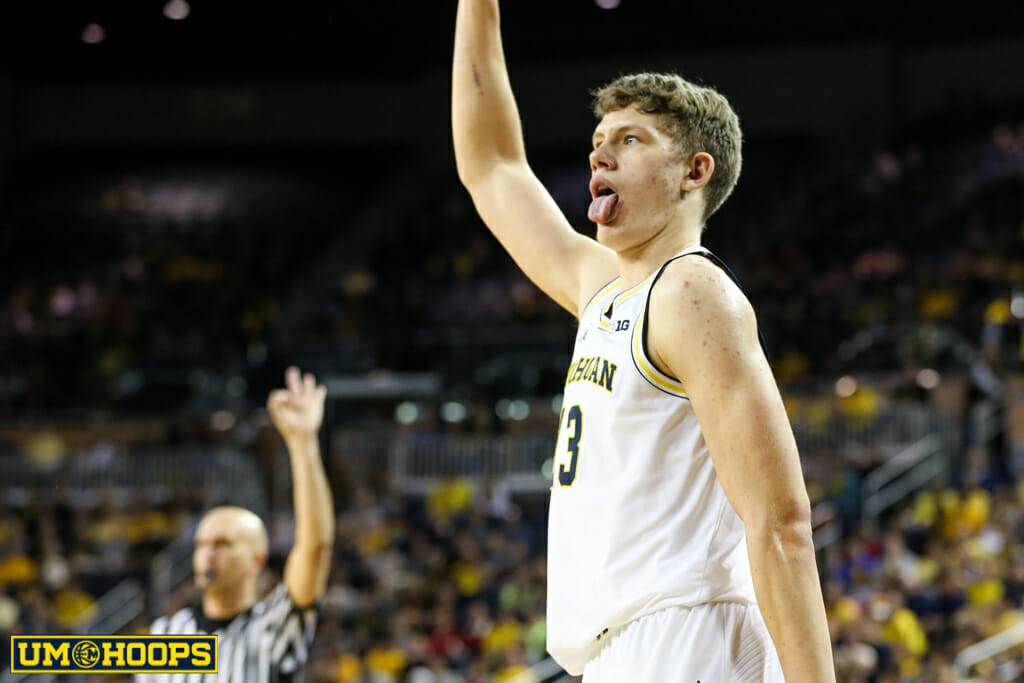 Michigan has only won two of its first six Big Ten games, but plays four of its next five at home.

Michigan has reached the point in the season where math makes every game mean a little more. Sitting at 12-7 overall and 2-4 in the Big Ten, the Wolverines are coming up on a critical chance to turn their season around.

It’s still too early for genuine must win games’ or for printing ‘queme los barcos’ t-shirts, but Michigan plays four of its next five games at the Crisler Center. The Wolverines will host Illinois, Indiana, Ohio State and Michigan State, with a trip to the Breslin Center sandwiched in between.

Are any of those games easy wins? Far from it, but they are the wins that this team needs if it wants to the make the NCAA Tournament. They are the top-50 and top-100 wins that matter when the team sheets are printed in Indianapolis in March.

Illinois just put it on the Wolverines in Champaign, but has been terrible on the road. The Illini need wins just as badly as the Wolverines, but are also a team that should be very beatable on paper.

“We got beat bad at their place,” John Beilein said of blowout loss two weeks back. “They basically opened a can of whooping on us and we’ll see how we respond to it. That is the one game that (we didn’t compete), if you watched us all year we competed right to the end in every single game.”

Illinois big man Maverick Morgan called the Wolverines a ‘white collar’ team after that thrashing, a quote which clearly caught the attention of Michigan players. John Beilein refuses to accept a lack of toughness in white collar workers across America, but understands the implication.

“We’ve talked about that,” he said of Michigan’s perceived lack of toughness. “That’s a perception until we change that perception by playing with more edge.”

The Wolverines will undoubtedly need that edge, especially playing three rivalry games in a five-game span. Michigan has lost four games in a row to the Spartans and was beaten in Columbus last year. But at the end of the day, teams that want to play in the NCAA Tournament beat bubble teams on their home floor. It’s that simple.

“You have little chance in being successful in this league if you don’t win at home,” Beilein said. “The teams that we have coming in here are all quality teams and this is the way the league is going to be this year.”

Defend home court and Michigan is on the positive side of the win-loss ledger by February 8th. Go at least 3-2 and navigating the rest of the season seems at least manageable. Lose more than two games over the next three weeks? It might be time to check the Crisler Center schedule for events in mid-March.

“Right now with 14 teams (in the league), Rutgers is getting fixed. You can see the scores. There are 14 teams that are really in good shape, not 7 or 8,” Beilein explained. “You saw the two road wins the other night, that’s three road wins in a row that were really great basketball games. You have to in at home because the road is tough, but it doesn’t mean we can’t go on the road and win as well.”

Winning on the road is easier said than done. Michigan hasn’t been able to win a game on the road in five tries this year and playing its way back into the picture with five of its final seven games away from home will be no small task. Not to mention that those late-season trips to Minnesota, Northwestern and Nebraska will all have NCAA Tournament implications for the opponent as well.

What’s it going to take for Michigan to start picking up wins rather than competitive losses? Beilein is trying to extinguish avoidable mistakes — free throw box outs, driving into the teeth of the defense, lapses in defensive concentration –and searching for an outlier, a message that he relayed to the Wolverines this afternoon.

“We need an outlier or we need a spark somewhere. I don’t know where its going to come from but that’s the issue,” he explained. “Every year that we’ve had good teams something happened at this time that a guy came forward and really played well. Just that one spark.

We have seen the spark before whether it was clutch play at the Breslin Center or Tim Hardaway Jr. learning how to play in the ball screen game mid-season. The moments in mid-January and early-February tend to define a season in one way or the other. But the ‘issue’ at hand of not knowing where the spark is going to come from is troubling.

“I can’t say that,” Beilein said when asked if he had any concrete ideas of where an outlier would come from. “I know if we had one player step up right now and play as an outlier. Whether he’s a really good player who all of the sudden goes bonkers and becomes a 50% three-point shooter, getting to the basket, all of these things. Or whether he’s off the bench. One player right now would change a lot of those situations right now that we’ve been in.”

There are plenty of candidates to stand out, but we’ve only seen them in short bursts. Moritz Wagner has the ability to take over a game with his offense. Derrick Walton and Zak Irvin have never been consistent, but they’ve won games with their individual efforts. The Wolverine bench isn’t deep, but Duncan Robinson (shooting) and Xavier Simpson (defense) both can do one single thing better than anyone on the roster.

All of the options are there, but for now Michigan is still waiting to see who steps up to the plate.