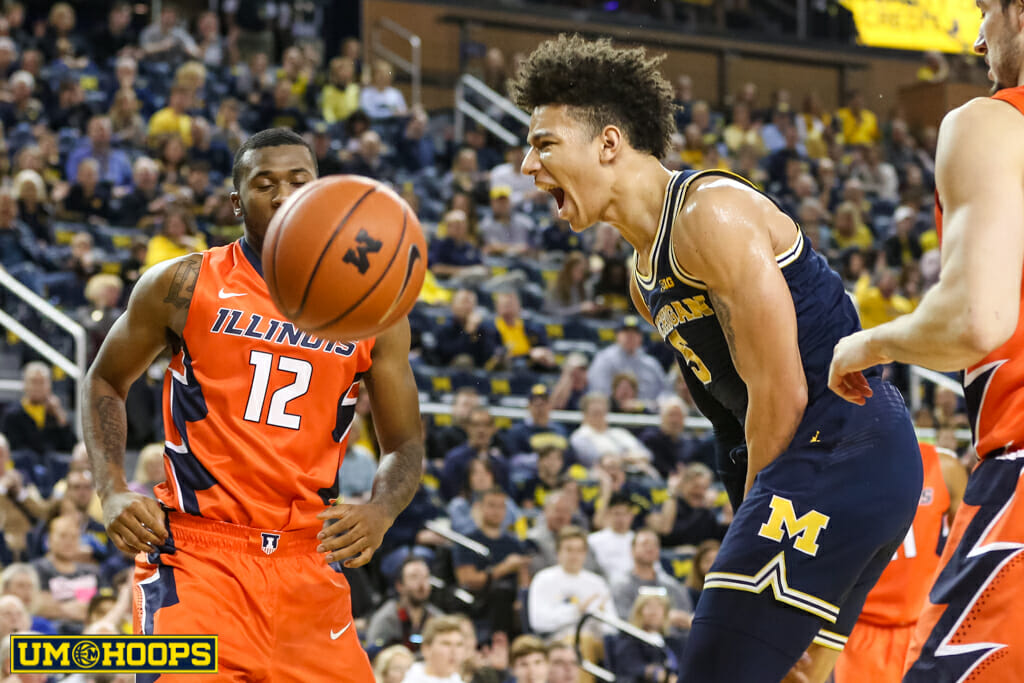 Michigan picked up a comfortable 9-point win over Illinois on Saturday afternoon despite not making a shot in the final 5:57.

There was no secret as to what was on the line Saturday afternoon at the Crisler Center. The Wolverines were hosting a team that kicked their ass 10 days ago and called them out afterward. They were also hosting a team that has been terrible away from home.

Michigan, sitting below .500 in the Big Ten, needed this win (and a few more coming up). Losing at home to Illinois would have sunk the conference record to 2-5 with much of the heavy lifting remaining.

The Wolverines played like they needed it and controlled the game throughout with a defense-first showing. They led by by 21 points with 5:57 to play before before sputtering to the finish line for a 9-point win.

After going scoreless at Wisconsin, DJ Wilson carried Michigan early and finished with 19 points, 7 rebounds and five assists. Eventually he got help from seniors Derrick Walton — 13 points and 11 rebounds — and Zak Irvin — 15 points — who both reached double-figures in the win.

Most importantly, Michigan played defense. The Wolverines held the Illini to 57 points in 66 possessions, their best defensive performance since mid-December.

Michigan did a terrible job closing this game out — the Wolverines didn’t make a shot for the final 5:57 — and that damaged some of the final efficiency numbers, but this was still a solid showing. Despite that sloppy late game execution and despite some late game no-foul prevent-type defense (that still resulted in several fouls) this was Michigan’s best defensive performance in Big Ten play at .87 PPP allowed.

The Michigan offense scored just 1.01 points per trip and the final numbers weren’t pretty  – on par with Michigan’s four worst offensive showings of the season — but I thought the U-M offense actually executed quite well. There were open shots and open cutters, but Michigan went through some brutal cold stretches from the floor. They also made just 14-of-22 free throws (Michigan ranks 6th nationally in FT%).

Turnovers were a big story throughout. Both teams struggled to hold onto the ball, but Michigan won out in that department. The Wolverines gave the ball away once every five possessions, but Illinois gave it away on 26% of its offensive trips. The net result was that Michigan outscored the Illini 22-12 in points off turnovers. Michigan also made up for the sloppy offense with a good offensive rebounding performance — rebounding a third of its missed shots for 14 second chance points.

Look back to the first meeting and it was Illinois that dominated the glass on both ends. I thought there was notable defensive improvement by Michigan. The Wolverines did a much better job helping and recovering in the ball screen game and they also held up to three or four Maverick Morgan post-ups early on and didn’t have to double. Guys like Kipper Nichols and Leron Black, who punked the Wolverines at times in Champaign, were relative non-factors.

Those are all encouraging signs, but the real test is coming up next as the Hoosiers head to Ann Arbor. That was a win that Michigan needed, but there’s still plenty of work to go. Next up is an Indiana team that boasts the best offense in the conference and isn’t nearly as straightforward to defend. A win would even Michigan’s conference record at 4-4 with three rivalry games on deck.