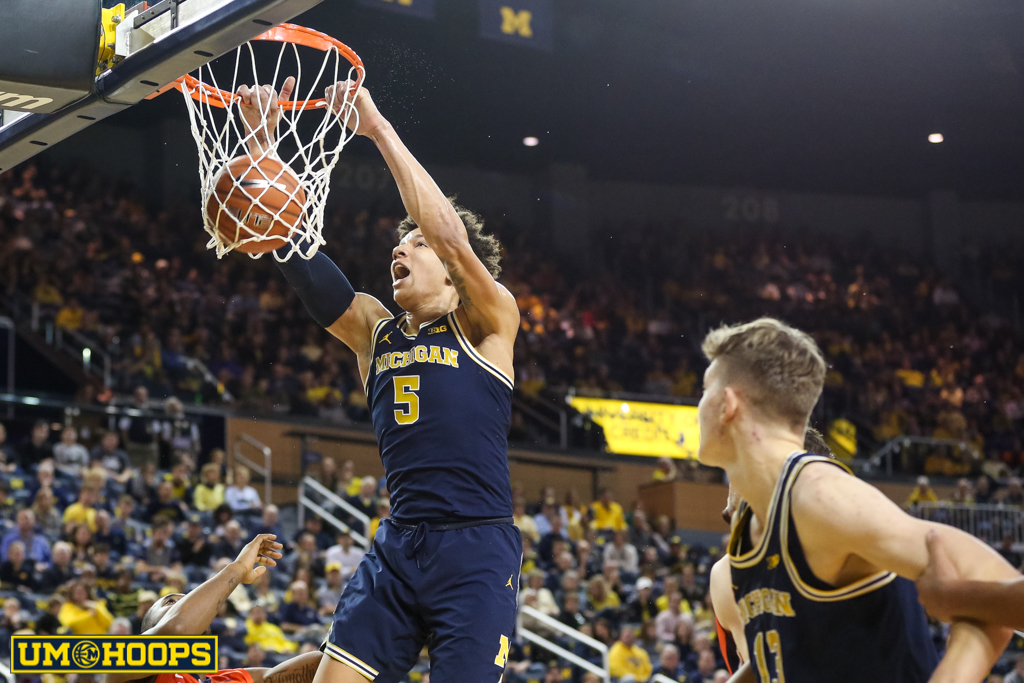 “I thought (Wilson) was absolutely terrific today,” Groce said after the game. “To be honest with you, he was pretty good (in) game one, too. … (Today) he basically produced 29 points minimum for their team with his assists and his scoring.”

For Illinois coach John Groce, his team’s 66-57 loss to Michigan boiled down to three things.

The first two: turnovers — the Illini had 17 — and second-chance points.

The third? Redshirt sophomore forward DJ Wilson, who was magnificent on all ends for the Wolverines Saturday afternoon.

“I thought (Wilson) was absolutely terrific today,” Groce said after the game. “To be honest with you, he was pretty good (in) game one, too. … (Today) he basically produced 29 points minimum for their team with his assists and his scoring. That’s right at probably half of their production. His energy level on the backboard, his willingness to make the extra pass and make his team better, I just thought he was absolutely terrific in the game. He was a real, real difference.”

It was a tremendous bounce-back effort for Wilson, who was held scoreless by Wisconsin while also fouling out this past Tuesday.

On Saturday, though, it took him just over three minutes to get on the board. Working out of the corner, Wilson drove into the lane and rose, right arm extended, to drain a quasi-hook shot.

He would tally 19 points total on 7-10 shooting and five assists, leading his team in both categories.

Most importantly, he tallied seven rebounds — six of them off the offensive glass. For Michigan coach John Beilein, that was the plan to get Wilson going on offense.

According to Wilson, after the last game, Beilein had told him to “get back to the basics.” The theory was that if Wilson grabbed more offensive boards and scored more “garbage” points, then the momentum might carry over to the rest of his offensive game.

Wilson’s re-dedication to the offensive glass was apparent early. His putback slam with 11:54 left in the first half was part of an 8-0 run that spurred Michigan to a lead it would not give up.

Several minutes later, he rose above a couple Illini defenders to tip-in a missed shot while being fouled.

“… That position for us, you can’t have five guys that you’re dialing up (plays for),” Beilein said. … So (Wilson’s) got to create for his own. And we will dial him up (plays). But he’s just got to find opportunities. … He can really shoot, but he’s got to understand, if we’re going to win, if he wants to play at another level, he’s got to mix it up inside. And he’s very receptive to that coaching, but the habit is to drift out. And getting in there, that’s where he gets stuff.”

Wilson has been a pleasant surprise for Michigan this season — after all, he’s only one year removed from averaging just 6.6 minutes per game, and two years removed from a redshirt. The proverbial light has come on, and the Wolverines have reaped the benefit of that far more often than not.

The next step for Wilson will be finding the consistency in his game that will propel him to being, as Beilein spoke about on Friday, a spark or outlier for this team. After Saturday’s outburst, it appears Wilson is the early contender to earn that role.

“We don’t know where the outliers are going to come from, but that’s an idea,” Beilein said.

“We certainly didn’t have that out of DJ the other day, and Derrick, he’s got to look to shoot the ball. … But who knows who it’ll be next game. I think each game we need it, but gradually we’ll get to this point — hopefully before too long — that guys feel really confident and they know they’ve got their swag (high) enough to play at their highest level every day.”