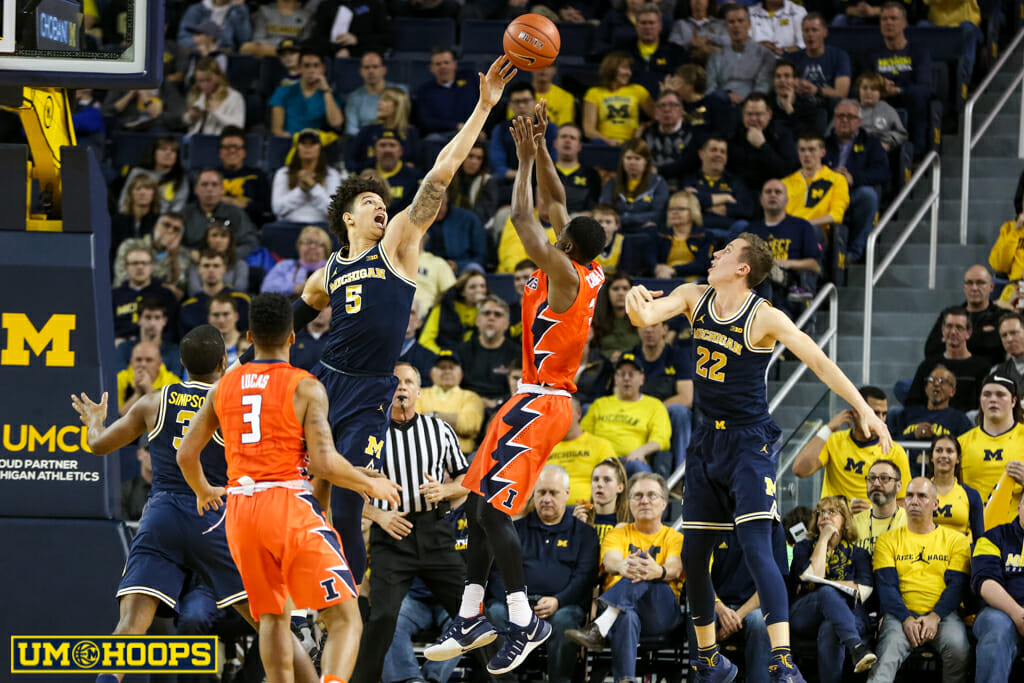 “I thought that was as hard as we played on defense all year,” John Beilein said.

This is not a boisterous Michigan team by any stretch. Sure, DJ Wilson will yell after a big dunk, Zak Irvin will proudly nudge a teammate after a key play, and Moritz Wagner will implore Crisler to get loud. That’s about it. The other rotation players hail from the Tim Duncan school of celebration. There’s nothing wrong with that. These guys play hard and want to win, even if it’s not evident by their demeanor.

To get that extra edge, it seems outside motivation is required. Maverick Morgan’s “white collar” comment after the first Illinois-Michigan game has fueled Michigan since, especially in Saturday afternoon’s rematch.

“It’s basically calling us soft,” Wilson said of Morgan’s choice of words. “We wanted to come out and show him that we weren’t going to be the white-collar team today.”

Irvin came up with the idea to wear blue jerseys—as in, blue collar—normally reserved for road games. And in case that wasn’t enough, assistant coach Billy Donlon wrote “STREET FIGHT” on the locker room wall—with a blue permanent marker—before the game.

“His energy was kind of contagious,” Wilson said of his coach, “and I think it showed in the first half.”

Just as Illinois had dominated Michigan 10 days ago, the Wolverines returned the favor. The 66-57 margin doesn’t do the rout justice. Michigan led by 21 with 4:30 remaining.

Not counting two guarantee games against woeful competition, this was Michigan’s best defensive performance, by points per possession, since the Dec. 6 win over Texas. Michigan forced 17 turnovers, held Illinois to 2 of 12 from deep, and did a good job on the defensive glass.

“I thought that was as hard as we played on defense all year,” John Beilein said.

Several of Illinois’ turnovers were unforced errors, but Michigan did record steals on three straight possessions early in the second half. It started with Irvin jumping the passing line at the top of the key and coasting in for a dunk. (Irvin had missed a few dunks earlier this year. “When I got the steal, I was thinking of…all my teammates,” he said. “Because I hear about it all the time. I was just glad I was able to throw it down to be honest with you. I was laughing with the guys.”)

On the next possession, with Wilson’s man backing him down in the post, Irvin reached in and poked the ball away; Derrick Walton corralled it. Finally, with Illinois trying to push the tempo, Muhammad-Ali Abdur-Rahkman raced down the court and cut in front of a pass.

“We were active, we were in gaps, we were swarming to the ball, flying around,” Beilein said.

Michigan was more physical than it had been on Illinois’ post-ups and tried to force the Illini offense to develop farther away from the basket. But there had been a lot of talk about how the defensive woes weren’t schematic. The effort and focus have been better of late. Irvin, for example, has worked on the mental challenge of fighting through fatigue.

“You can’t take any plays off, especially on the defensive end, because you don’t know what possession will change the whole game,” Irvin said.

The messages the coaches have been preaching all season are perhaps finally sinking in. If the Wolverines needed some gimmicks to reach their full potential, so be it.

Asked about Donlon’s defacing of the locker wall, Beilein said: “I’m up for anything that’s legal, that is motivational, that makes our kids realize there’s another degree—the 212 degrees (the boiling temperature of water) that you can play at.”

It’s only natural that Donlon and the other first-year assistant, Saddi Washington, are becoming more comfortable with the players and learning what buttons to press, just as previous assistants had done. And of course Michigan had the bonus incentive of an opponent calling them out.

“I don’t want us to be (so) externally motivated,” Walton said regarding the “white collar” comment. “I think we need to do a better job of motivating ourselves.”

Asked how they can do that, he added, “Just not being satisfied. Knowing that the way we played today on the defensive side of the ball is something we have to make a consistent thing. Using this as fuel as opposed to, ‘All right, we got those guys.’ Building on this game as opposed to looking at it as just a good day.”

Indiana and its Big Ten-best offense comes to Crisler on Thursday.