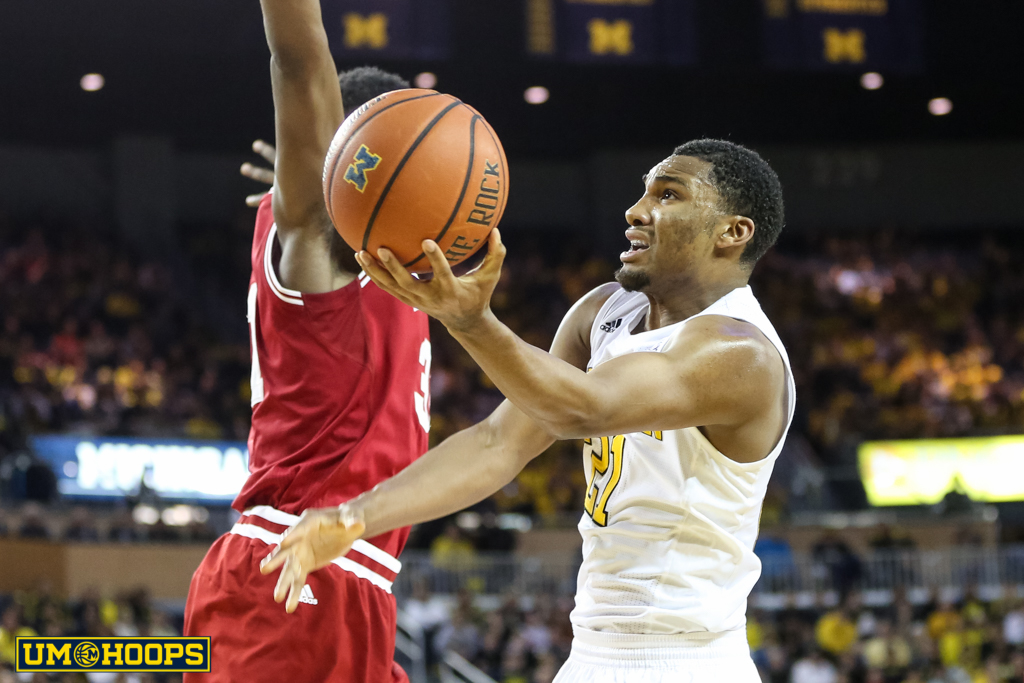 Michigan’s defense has improved its past two outings against Wisconsin and Illinois. But the Wolverines will face their most challenging defensive test when they face Indiana, holders of the Big Ten’s most efficient offense.

Michigan’s defense has improved its past two outings against Wisconsin and Illinois. But the Wolverines will face their most challenging defensive test when they face Indiana, holders of the Big Ten’s most efficient offense.

In last year’s contest at Crisler, Michigan saw just how devastating the Hoosiers’ attack can be when operating at peak capacity. After facing an 11-point deficit halfway through the first half, Indiana went on a 29-3 run and grabbed a 21-point halftime lead that left Michigan completely demoralized heading into the locker room.

Though the Hoosiers have since lost the likes of Yogi Ferrell to graduation and OG Anunoby to injury, Michigan coach John Beilein is still fearful Indiana has the similar tools and firepower to hang points like they did over that massive run last year.

“They had shooters at four positions and they can do that again,” Beilein said on Wednesday. “They just have a lot of weapons again. They patched any holes they’ve had in graduation, or in the NBA. They’re loaded with good scorers, that’s for sure.”

Indiana is one of the country’s best teams at driving to the hoop and penetrating into the hearts of defenses. The Hoosiers have the Big Ten’s second highest eFG%, and know how to work the ball inside-out to find good shots. That’s concerning for a Michigan defense that has the worst eFG% against in the league today.

In order to stop Indiana from finding easy baskets, the Wolverines realize they will have to limit the Hoosiers in transition. That could prove problematic for Moritz Wagner and DJ Wilson, who each are expected to start against Indiana for the first time in their respective careers.

Wagner believes the Hoosiers will bring the fastest attack he’s ever played against, and is focused on slowing them down by containing their transition game.

Another difficult defensive component Wagner faces is preventing the Hoosiers from dominating the offensive glass. Indiana tops the conference in offensive rebounding percentage, with center Thomas Bryant leading the effort.

Since his poor performance at Illinois, Michigan coaches have been working with Wagner to improve his physicality on defense. Wagner showed against Wisconsin and Ethan Happ he has the ability to put up a fight against the Big Ten’s best forwards, but couldn’t keep himself out of foul trouble doing so. Now, Wagner will have to figure out how to do so without picking up fouls in order to contain Bryant on the boards.

Guard James Blackmon is Indiana’s hottest weapon at the moment, and is coming off a 33-point performance against Michigan State over the weekend. Beilein wouldn’t comment on defensive matchups in Wednesday’s presser, but Zak Irvin will likely have the assignment to contain the Hoosiers’ hot hand, and is up for the challenge.

“I like the dog in him when it gets to him,” Beilein said. “I mean that from a positive standpoint. He will embrace this challenge with whoever we assign him to in this game.”

Irvin’s been tasked with facing some of the Big Ten’s most prolific scorers thus far in conference play. For the most part, he’s proved he has the ability to bring intensity on both ends of the floor. But there have still been moments where Irvin’s workload — he’s currently second in the Big Ten in minutes played — has caught up to him.

With another difficult matchup against Blackmon coming, Beilein knows he has to manage Irvin’s minutes well to get the most out of his senior.

“What we just have to be careful of is him getting so tired that all of the sudden he’s short on his jump shot or he doesn’t finish at the rim because his legs are gone,” Beilein said. “He does play really hard when he’s trying to guard somebody. He takes those matchups personal.”

Two former Michigan assistants will face each other for the first time as head coaches when LaVall Jordan and UW-Milwaukee travel on Friday to face Bacari Alexander and UD Mercy.

Despite having the chance to watch two of his former colleagues square off just 45 minutes away, Beilein has made other plans.

“I originally planned, ‘Oh, that’s a game I’m going to make,’” Beilein said. “But, I think I’m going away recruiting that day now. So I’m not going to make it. But, it’s really fun to see what those guys are doing as my other guys that are out there.”

Beilein didn’t specify where exactly he’d be visiting due to NCAA regulations. With just over a day to prepare for the Wolverines’ huge trip to East Lansing, it’s safe to assume Beilein won’t too far from Ann Arbor on Friday night.

As for the coaches that will be at Callahan Hall, Beilein had nothing but praise for two individuals he had become so close with the past few years.

“I’m proud of both of them,” Beilein said. “I think Bacari’s being really innovative right now with changing his defense and trying to create an up-tempo game. LaVall had two back-to-back last second wins. It’s great, I’m happy for both of them.”