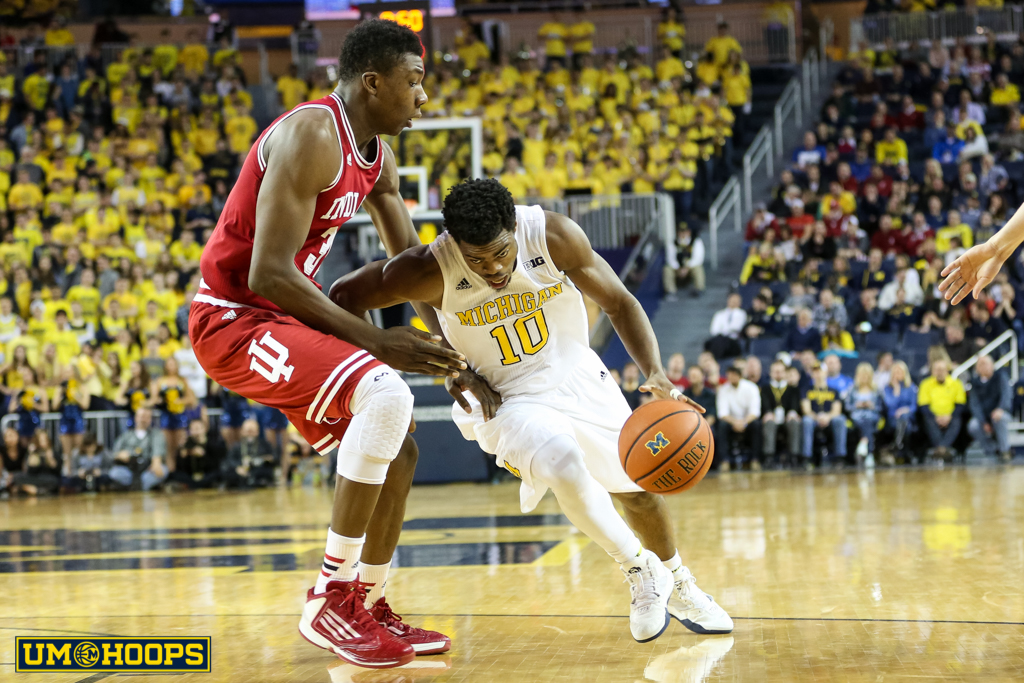 Michigan is looking to win back-to-back games for the first time since December as it welcomes Indiana to the Crisler Center tonight.

Michigan is looking to win back-to-back games for the first time since December as it welcomes Indiana to the Crisler Center tonight.

The match-up features two of the conference’s best offenses, but also two of its worst defenses. Both teams have also demonstrated impressive ceilings, but also low floors.

The Hoosiers are a team that beat Kansas and North Carolina this year, but also lost at IPFW, to Nebraska at home and have just a 2-4 record in games away from Assembly Hall. On it’s best day, Indiana can beat anyone. On it’s worst, it can lose to anyone.

Indiana has also been snakebitten by injuries over the past two weeks. Projected lottery pick OG Anunoby suffered a knee injury at Penn State that will cost him the season and Juwan Morgan (left foot) has also missed the last two games, but could be close to a return although no decision has been made.

It doesn’t feel like long ago that these two programs were battling for Big Ten Championships whenever they played — Indiana won the league outright last season and Michigan or Indiana has won at least a share in four of the last five seasons — but this year the stakes are clear: these teams are playing to cement their NCAA Tournament resume and make the dance.

It is also impossible to write this preview and not look back on what happened last year between these two. Indiana handed Michigan one of its most demoralizing home losses in a season that featured plenty, including this ridiculous run to close the first half.

Of course, Michigan turned around and beat the Hoosiers in the Big Ten Tournament on Kam Chatman’s buzzer-beater to punch its ticket to the tournament. But while this team has talked a lot about wanting to be tougher, this is a good chance to prove it. Michigan was 17-5 (7-2 Big Ten) when Indiana won at the Crisler Center last year. A win might galvanize the Wolverines in a different direction this year, but what about a loss?

Indiana head coach Tom Crean catches some heat from his fanbase from time-to-time, but the Hoosiers routinely have one of the best offenses in the Big Ten. John Gasaway first defined the ‘perimeter-oriented’ offense as a high 3PA, low turnover, low rebounding units. That’s a recipe that Crean’s teams follow with one twist. The Hoosiers generally struggle with turnovers, but are great on the offensive glass.

This Indiana team isn’t just the 2nd-best shooting team in the conference with a 56.1 eFG%, it is the best offensive rebounding outfit in the league as well. The Hoosiers also do a terrific job of getting ‘good shots’ on offense — that means shots at the rim or threes, without many mid-range attempts. Per numbers from Krossover, only Maryland attempts fewer mid-range jumpers.

Defensively, the numbers are ugly as the Hoosiers rank 10th or worse in all four factors defensively.

Indiana fouls more than anyone in the Big Ten, giving up 43.8 FTA per 100 FGA. The Hoosiers rank only 8th in the league in defensive eFG% at 50%, but their greatest problems have been defending the three. Big Ten foes have hit 41.5% of their threes against IU (11th) compared to just 46.2% of their twos (7th).

Indiana doesn’t force many turnovers, but it is worth pointing out that 4 of their 6 losses came were in the 4 games where their opponents turned the ball over the fewest. Avoiding turnovers doesn’t just help offensively against Indiana, it also helps stop the transition offense.

Hoosier guard James Blackmon has been dominant early on in Big Ten play. Blackmon lit up Michigan State for 33 points, hit the game-winner at Penn State and is averaging 19.3 points per Big Ten game. Among the 19 players tht have used 24% of their team’s offensive possessions in Big Ten play, Blackmon has been the most efficient with a 126.3 offensive rating (over 10 points per 100 possessions better than No. 2 Glynn Watson).

He’s playing like an All-Big Ten First Team player and he should give Michigan’s perimeter defense all it can handle.

Indiana’s No. 2 scorer is 6-foot-3 junior Robert Johnson at 14 points per game. Johnson is a two-way guard who does a great job with shot selection. He’s a shooter first and foremost — making 51% of his Big Ten threes (20-of-39) and 42% for his career — but he can also attack closeouts and get to the basket. On the inside, the Hoosiers have a future first round pick and a promising freshman with size. Thomas Bryant ranks 7th in the league in points created out of post-ups and while he’s not quite as efficient as Ethan Happ, Caleb Swanigan, Nick Ward or Isaac Haas, he also has the ability to stretch the floor. Bryant is a 38% three-point shooter on the year, but is just 2-of-11 from deep in league play. He’s a good rim protector and rebounder and can also hit his free throws when he gets to the line.

6-foot-10, 240 pound freshman De’Ron Davis has also proven his ability to carve out space inside and score on the block. All of his action comes around the rim and he shoots 54% on twos.

The point guard position has been a significant step down from Yogi Ferrell with Pitt transfer Josh Newkirk and freshman guard Curtis Jones splitting the duties. Newkirk leads the team in assist rate, but also turnover rate while shooting 46% on twos and 34% on threes. Jones isn’t quite as effective of a creator and is making just 39% of his twos and 38% of his threes.

The Hoosiers have had a few moving pieces at the four with the news that Anunoby is out for the season. I’d guess that Juwan Morgan returns to action for tonight’s game and the 6-foot-7, 230 pound sophomore is an extremely efficient player — shooting 72% inside the arc but without much of a perimeter stroke.

If Morgan can’t go, or while he sits, expect 6-foot-6 sophomore Zach McRoberts, a solid defender, and 6-foot-6 junior college transfer Freddie McSwain to play the additional minutes at that spot.

Freshman guard Devonte Green will play 15 minutes or so off the bench. He shoots 57% on twos and 39% on threes, but has been turnover prone at times this season.

Just go out and win the game. This is one of those points in the season where it feels like a win would steady the ship at a pivotal team and a loss would raise the alert level to code red with a trip to the Breslin Center on deck. This is a good Indiana team, but it isn’t a great Indiana team and for the first time since 2012 there’s no Yogi Ferrell on the other bench. Playing at home, KenPom likes Michigan by a final score of 74-73 and gives the Wolverines a 54% shot at the home win.