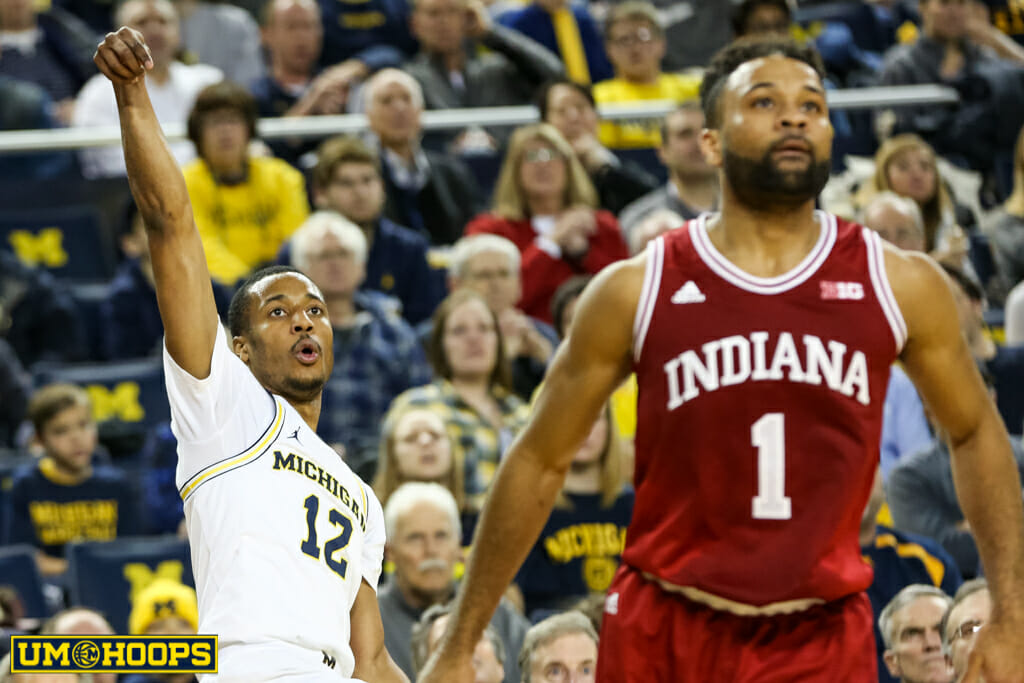 Blackmon made his first two shots before missing on his third with 9:18 left in the first half. Then, amazingly, he did not attempt another shot for the rest of the game despite finishing the contest with 33 minutes played, tied for most on his team.

His coach has spoken about it. His teammates already believed he fit the role. Before Thursday night though, Muhammad-Ali Abdur-Rahkman had yet to emerge as a true defensive stopper.

It’s the junior guard’s offensive skills that have always drawn the most attention. He’s the definition of a slasher, creating his shot at will by bounding into the paint with reckless abandon at times. His perimeter game has developed too — he shot 36.5 percent from behind the arc last year before a slight dip to a still effective 33.3 percent this season.

The defense has come, to a degree, less easily. Abdur-Rahkman had shown flashes of it in the past. Perhaps it was these glimmers that created the perception that he was indeed a defensive force.

But against Indiana at Crisler Center, that perception finally became reality when Abdur-Rahkman used every inch of his lanky 6’4 frame to harass Indiana’s James Blackmon Jr. into his worst game of the season — and possibly of his career.

Blackmon entered Thursday’s matchup averaging 22.6 points per game over his past five outings. A lethal three-point shooter, he had hit 11 of his last 21 attempts from long range. And the pinnacle of his recent performances had come only one game prior to the Hoosiers’ matchup with Michigan, when Blackmon scored 33 points on 11-for-16 shooting against Michigan State.

Blackmon was exactly the type of perimeter-oriented player that Michigan has struggled to defend this season, and yet, in his team’s blowout 90-60 loss to the Wolverines, he was put on ice.

Blackmon made his first two shots before missing on his third with 9:18 left in the first half. Then, amazingly, he did not attempt another shot for the rest of the game despite finishing the contest with 33 minutes played, tied for most on his team.

After the game, Indiana coach Tom Crean bemoaned his team’s inability to spring Blackmon loose on the perimeter with screens, describing his star player’s quiet performance as something caused by the Hoosiers’ lack of execution.

Unsuccessful screens aside, it was Abdur-Rahkman who hounded Blackmon all night. From the opening tip, Abdur-Rahkman face-guarded his adversary, doggedly denying him the ball. And when Blackmon did receive the ball, he was uncomfortable, often passing the ball right back to his teammates. On one occasion, he ventured inside before dribbling the ball off his foot, and on another, he threw the ball away.

The stats tell it all: Blackmon finished with as many points as turnovers, coming 14 points under his season average, and a minus-37 +/- rating.

Abdur-Rahkman, on the other hand, finished with 12 points, a plus-30 +/- rating, and the praise of his coach and teammates.

“I don’t know if kids go into college saying, ‘Oh, I’m going to be the defensive stopper,’ ” said Michigan coach John Beilein. “They want to be the leading scorer. And it’s difficult to have kids have that mindset. But everybody needs everybody to do something. … There’s jobs everybody has to have on this team, and that’s the one we want Muhammad to embrace. It’s all about an attitude, and he had it today.”

Added Zak Irvin: “We look for him as our defensive stopper. He had a big assignment going against James Blackmon, one of the best in the Big Ten, and for him to be able to hold him to four points, that’s really something special.”

It doesn’t get any easier from here on out — Michigan faces Michigan State twice and Ohio State once over the next three games, and there will be plenty of tough defensive assignments for Abdur-Rahkman.

The Spartans feature Miles Bridges and Eron Harris. The Buckeyes have JaQuan Lyle and Kam Williams. And then, after that, a rematch against Blackmon and Indiana at Assembly Hall.

So what comes next for Abdur-Rahkman?

His team’s defensive improvement over the past three games is undeniable. Maverick Morgan’s ‘white collar’ comment, it appears, has inspired the Wolverines to play some blue-collar defense — whether they’re actually wearing blue jerseys or not.

But on nights when the team defense isn’t as cohesive and opposing teams aren’t dribbling the ball off their feet, the Wolverines may find themselves in a position of needing their defensive stopper.

And Thursday night, it became clear that he may finally fit into that role.