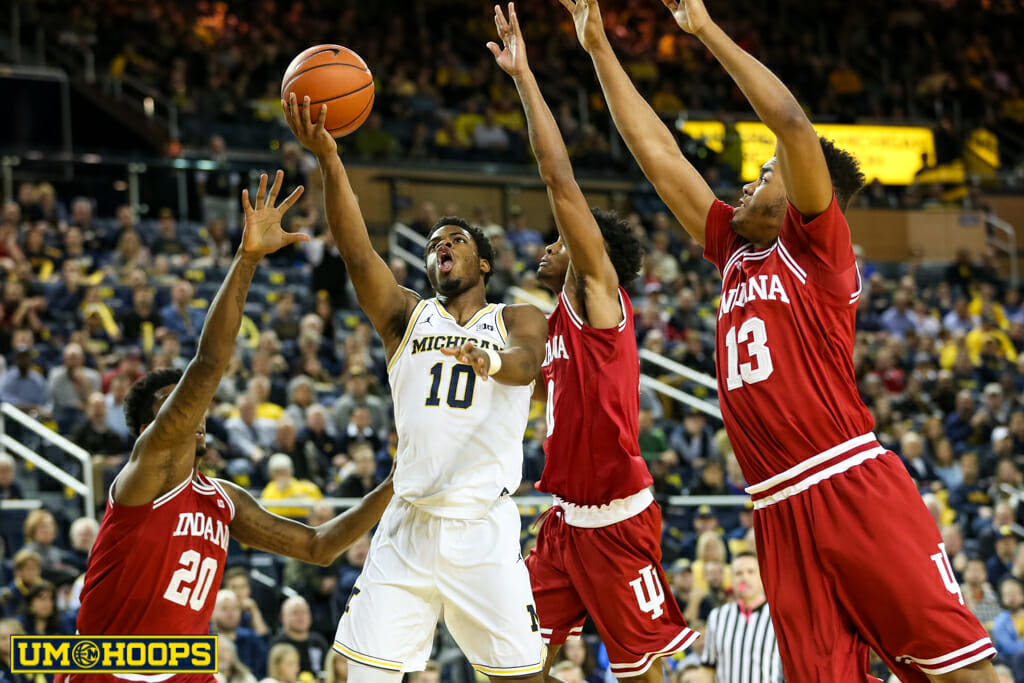 Derrick Walton showed the ability to finish at the rim in traffic against Indiana, a development that would be critical for Michigan.

Derrick Walton, Jr. is always preaching to his teammates to play with supreme confidence. They’re at Michigan for a reason; they need to play like it. Walton’s performance on Thursday night shows how important it is that he believe his own message.

The senior finished with game highs in points (21) and assists (five). Walton does a lot of mental visualization work. Imagining success before he takes the court, as opposed to worrying about it once he’s there, is key.

“I think sometimes I overthink some things,” he said after the 90-60 win over Indiana. “I think I’m at my best when I’m just playing off instinct. Tonight, and since conference play started, I’ve been trying to play off instinct and stop trying to over-read the game, and just make the right play.”

He’s the point guard, but also a 42 percent three-point shooter with more than 1,000 career points. His coach implores him to hunt shots.

“It’s a balance between being too unselfish and accepting the fact that I’m the leader of this team,” Walton said. “Guys are encouraging me more to shoot it than pass it at times.”

All five of Walton’s assists led to three-pointers, and only one involved any sort of dribble penetration by Walton. But that doesn’t mean he wasn’t attacking the basket. Perhaps the most encouraging stat of the night for Michigan fans was Walton’s 6 for 6 performance inside the arc (he was also 1/2 from three and 6/7 from the free throw line). Three of those baskets were right at the rim in traffic.

“There’s an art to finishing around the rim, especially with a body on you,” Michigan coach John Beilein said. “He’s really worked hard at that. … We believe he’s a great three-point shooter. If he can shoot well from two, that’s a really good sign for us offensively.”

Walton is shooting 45 percent (31 of 69) on two-point shots this season, the same as his freshman year. His numbers had dipped in that department as a sophomore (36 percent) and junior (32 percent). Most impressively, he’s shooting 51% on twos in Big Ten play.

According to Krossover, he’s making 59 percent of his shot attempts inside 5 feet. He also hit a pair of pull-up jumpers from the elbows on Thursday night , a shot he’s struggled to make consistently.

“I’ve always been a great finisher,” the 6’1″ Walton said. “I feel like I’ve gotten in my head a couple times about once I get in the lane. Just getting back to the basics of putting the ball off the glass and scoring.”

On Thursday, he finished through a foul after a backdoor cut and had a couple of strong drives to the rim. His most impressive bucket came late in the second half after he dribbled behind his back in the paint, turned his back to the basket, and flipped the ball off the glass.

Walton’s overall performance had to be among the best in his career. He’s too talented—and too important to this team—to disappear for stretches. When Beilein talked about finding an “outlier” in this group, Walton providing more than just spot-up threes would qualify. The scoring is what stood out, but Beilein also praised Walton’s defense on Thursday and noted the charge he took in the final minutes of a blowout victory.

“Our team is so hard on him and I’m probably the hardest on him, because I know what he’s capable of,” Zak Irvin said of his fellow captain. “He’s a pass-first point guard, but when he plays aggressive like he did tonight, it changes our whole team and takes us to the next level.”