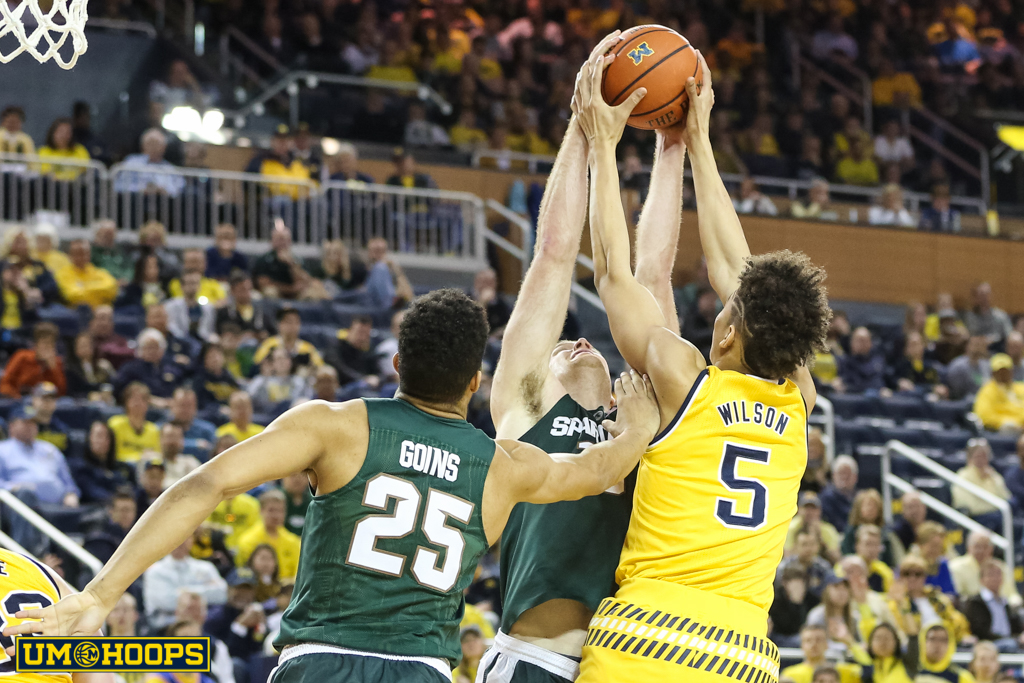 Michigan heads to East Lansing to take on Michigan State on Sunday afternoon, here’s what to expect.

The Michigan and Michigan State rivalry is in an odd spot.

The Wolverines controlled the series from 2011 through 2014, winning 6 of 8 meetings until a blowout loss in the Big Ten Tournament final. Then over the last two seasons, Michigan State has had the much better team and took care of business on the court: winning three in a row to extend their streak to four.

But now, for the first time since 2011, both Michigan and Michigan State look a lot more like bubble teams than Big Ten contenders.

This is a match-up of two teams that have been fighting up hill this year, trying to find their way and forge an identity. For either group, a rivalry win could galvanize the season and provide a huge boost of momentum. Either way, we’ll turn around and do this all again 10 days later in Ann Arbor.

You only have to look at one statistic to realize that this is not a vintage Michigan State team under Tom Izzo: offensive rebounding. Only one team in the Big Ten (Michigan) has rebounded a smaller number of its missed shots than the Spartans. In the last 16 years, an Izzo team has never rebounded less than 30% of its misses. The Spartans have grabbed just 28.3% this year, good for 215th nationally.

Michigan State was great defensively to open the Big Ten, holding its first 7 opponents below a point per possession, but has started to show chinks in the armor during its three-game losing streak. Ohio State, Indiana and Purdue all topped a point per possession and posted the three best eFG% shooting performances against the Spartans this year (including 47% three-point shooting in over that 3-game span).

The Spartans are best on the interior, ranking 3rd in the league in 2-point shooting percentage allowed, defensive rebounding percentage and block rate. On the flip side, they don’t force many turnovers, have been burned by the three at time and foul as much as anyone in the conference.

Michigan State’s ball screen defense has been poor overall, 3rd worst in the Big Ten, and there should be opportunities to find the roll man as the Spartans rank last in the Big Ten in PPP allowed to the roll, per Synergy.

The first two names on the scouting report jump out as immediate mismatch opportunities but, as we saw against Indiana, they could also be defensive mismatches for the Spartans.

6-foot-7, 230 pound freshman Miles Bridges is generally the best athlete whenever he steps onto a basketball court. You’ve seen his highlight dunks by now, and he’s coming off of some of his best offensive showing of the year as he rounds back into form after missing time due to injury. Bridges went for 33 points on 12-of-17 shooting against Purdue and is averaging 21.5 points per game over the last 4.

Peeling back the onion on Bridges shows a few statistical oddities. First, the three-point shot is a significant part of his game despite his highlight dunks. 38% of his shot attempts are threes, which means he attempts a higher ratio of threes than Zak Irvin, and he’s knocking down the triple at a 42% clip.

He also doesn’t grab as many offensive rebounds (just 5 in 6 Big Ten games) as you might expect from a player of his physical abilities and his free throw rate (25.8%) is just average. Bridges turned the ball over 13 times in the first 4 Big Ten games, but has cleaned that up of late with 5 assists to 2 turnovers over the last two.

Down low, Michigan will have to deal with 6-foot-8, 250 pound freshman Nick Ward. Ward ranks right up there with some of the Big Ten’s other post-up staples. He’s not quite as efficient as the league’s best, but the fact that he draws 9.5 fouls per 40 minutes should be a big concern for Moritz Wagner.

Wagner has shown improvement in his ability to guard the post in recent weeks, especially against Ethan Happ, but this will be a critical test on the road. Fouling Ward isn’t always a bad outcome either, he’s making just 56% of his free throws in league play.

After Bridges and Ward, you are stuck guessing where Michigan State is going to try to beat you. Izzo’s best teams have that one guard who is lethal running off screens and shooting the ball — Bryn Forbes, Drew Neitzel, Travis Trice, etc. — this team might have those guys for one game or another, but there’s not a consistent threat. The fact that Michigan State’s bench plays 45.8% of available minutes — the most of any team in the country — speaks to just how much Izzo is trying to juggle the roster and find the right combination of ‘weird guys’.

West Virginia transfer Eron Harris was supposed to play that role this year, but his consistency has been fleeting. Harris went for 21 at Indiana and 24 against Rutgers, but he’s been held to single digits in the other 4 Big Ten games. Despite his inconsistency, he’s still a 40% three-point shooter that has to be respected on the perimeter.

6-foot-5 freshman Joshua Langford takes about as many twos as threes and is shooting 57% inside the arc and 43% from outside. He uses only 15% of Michigan State’s offensive possessions and has been in single digits in 9 of the last 10 games.

If you could combine Michigan State’s two point guards into one player, you’d have a star. Lourawls Nairn regained his starting spot over the last four games, and is the better defender of the duo. Nairn has gone from laughably bad shooter, to just good enough to force you to guard him. He’s shooting 57% inside the arc and is 9-of-24 from three on the year. Offense is still a struggle at times as he’s scored 4 or fewer points in 6 of the last 7 games.

Offense is no problem for Cassius Winston as he leads the country in assist rate, but he’s not without his flaws. Winston has issues defensively and has also tended to force the issue at times resulting in turnover woes.

Post depth is one of the biggest problems with this Michigan State roster because after Ward there’s just not much else. Former walk-on Kenny Goins handles the bulk of those responsibilities. He’s tough, physical and active on both backboards, but he’s limited offensively as the majority of his offense comes from dump offs and putbacks around the rim. Because of foul trouble, Izzo’s frustration and conditioning, Goins ends up playing almost as many minutes as Ward.

Senior forward Alvin Ellis has been playing the best basketball of his career in Big Ten play. He’s a good defender and can hit the open three (37%), but a relatively low usage cog in the Spartan attack. His rise in playing time has coincided with Matt McQuaid‘s offensive regression. McQuaid is shooting 39% on twos and 29% on threes in Big Ten play and averaging just 2.2 points per game over the last 5.

It’s a rivalry game which means it’s easy to draw up narratives about the outcome.

You can argue all day that one team cares more about the rivalry than the other, but at the end of the day the fact is that the better, healthier team has usually won these games in the last half-decade.

Maybe Izzo’s group will be hungrier because they’ve lost four out of five games, or maybe this is as good of a chance as you are going to get at the Breslin because, well, the Spartans have lost 4 of 5 and don’t appear to be that great.

Michigan hasn’t won a game on the road this season and hasn’t necessarily demonstrated the moxie to perform that feat at the Breslin Center, but the numbers say they should have a chance. KenPom projects a 67-66 Michigan State win, but gives the Wolverines a 45% chance at the road upset.