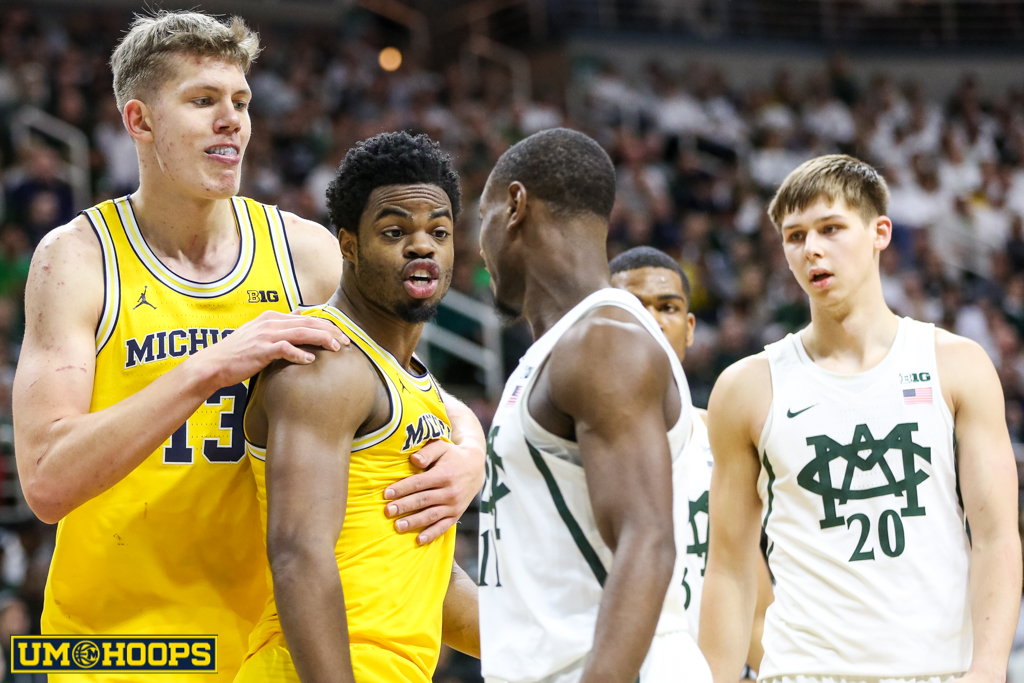 Michigan got a heroic performance out of Detroit native Derrick Walton, but it wasn’t enough on the road against Michigan State.

Michigan got a heroic performance out of Detroit native Derrick Walton, but it wasn’t enough on the road against Michigan State.

Michigan State controlled the game from the inside-out and was able to keep Michigan at arms’ length down the stretch to pull away with an 8-point win. The Spartans outscored the Wolverines 34-20 in the paint and were led by their freshman trio of Miles Bridges, Cassius Winston and Nick Ward — all of whom reached double figures.

Michigan battled, but couldn’t overcome uncharacteristic second half turnovers and an 0-for performance by Zak Irvin, who had been battling the flu.

Michigan State did a great job of manufacturing easy looks at the basket all game. These were generally Nick Ward flashes in the post (6-of-6), Miles Bridges slashing across the lane and finishing with a hook, or Cassius Winston creating something out of the pick-and-roll game. There were a few breaks along the way — a grazed rim putback and a Nairn bank shot stand out — but Michigan State made 54% of its two-point attempts and that’s just not good enough interior defense to win on the road.

Michigan’s defensive rebounding was solid — MSU rebounded only 29.6% of its misses — but the Spartans were in the bonus early in both half and manufactured points at the free throw line. That combined with three timely triples by the slumping Matt McQuaid resulted in 1.13 points per trip by the Spartans, too much for the Wolverines to overcome.

Michigan’s offense managed to score a point per possession, but only barely. This was the third-worst offensive showing of the season as the Wolverines shot just 40% inside the arc and 27% from three. Turnovers on 21% of possessions and 12-of-30 shooting inside the arc were the biggest problems with the offense. There were times that Michigan wings got into good spots but failed to finish and those opportunities can’t go wasted on the road.

In the big picture, this loss doesn’t change a lot. A win would have been pivotal, but the mid-week win against Indiana bought Michigan some space. The situation remains the same: defend home court and figure out how to steal a couple on the road down the stretch.

Michigan has a week to re-tool before hosting Ohio State, then it gets another crack at Michigan State on its home floor. I think this is a game that the Wolverines will look back on in film and think they have as good of a chance as you could ask for in the rematch 10 days down the road.