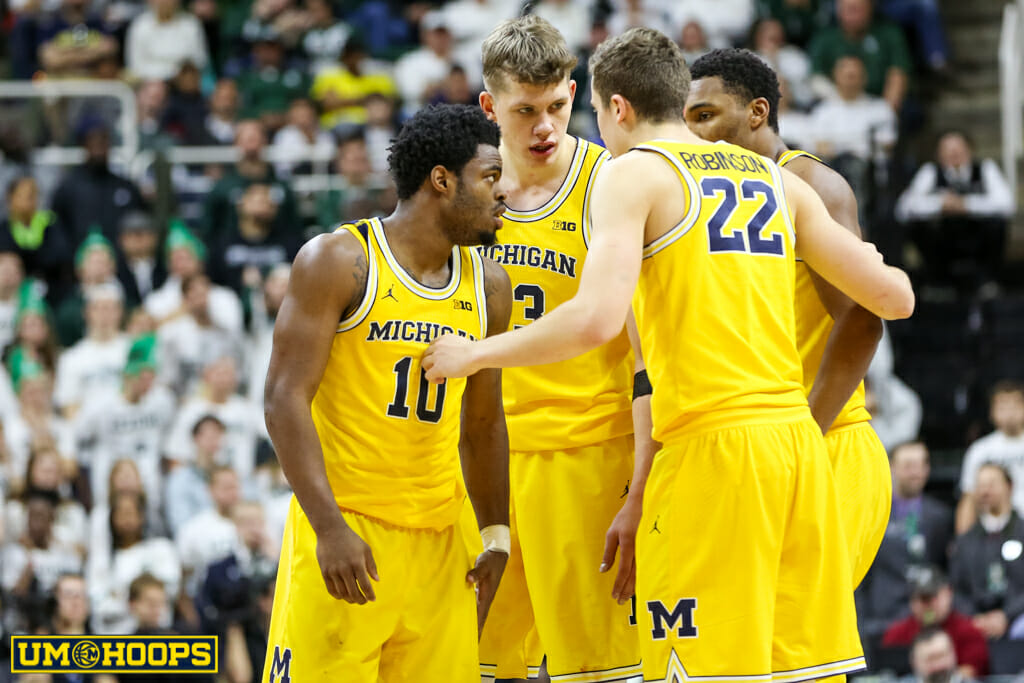 Derrick Walton played another great game for Michigan in East Lansing, but he didn’t have enough help.

Derrick Walton Jr. doesn’t have a reputation as the most demonstrative player. Michigan’s senior point guard and captain has admitted in the past that he’s had to work on being more vocal as one of his team’s leaders. It shows on the court, too — he is often reserved, his on-court visage stoic as he runs the offense.

But for a moment in his team’s 70-62 loss at Michigan State Sunday afternoon, Walton broke the mold. It happened on one possession late in the second half, with his team trailing the Spartans by eight and its chances of capturing a win dwindling by the second. As the shot clock wound down, Walton found himself with the ball, matched up against Tum Tum Nairn. He sized up his defender then pulled up for a three-pointer, drawing the foul on Nairn in the process.

While the play itself was important, bailing his team out from an ugly offensive possession, what happened next was even more remarkable. Walton turned and looked at Nairn, and appeared to say, “You can’t guard me.”

It was a rare glimpse at the openly competitive side of Walton. He has yet to scream at his teammates in the huddle, like a red-faced Zack Novak once did, or gleefully blow a kiss to the Breslin Center crowd, like Nik Stauskas once did. That isn’t to say Walton lacks in intensity — he just chooses to keep his emotions in check.

It was different on Sunday, though. In his first game in East Lansing since his freshman year, Walton brought the fire.

The rivalry means more for Walton, and for obvious reasons. He’s one of just two Wolverines from Michigan, and the second, freshman forward Austin Davis, won’t see the court against the Spartans until next year at the earliest.

Walton grew up in Detroit. He knows Michigan State players such as point guard Cassius Winston. For him, this wasn’t just a crucial road game between two teams positioned on the NCAA Tournament bubble. It was personal.

“I treat it like any other game but of course, it’s about bragging rights,” Walton said Friday, two days before the game. “Last time I did play there, I think we played well and we won. Hopefully I can replicate that performance and get a win.

“… “The hostility of that crowd is a different monster. There’s nothing like walking into a gym and knowing you’re hated there. You’ve got to embrace it and love it.”

And while Michigan didn’t replicate their performance from three years ago, Walton did.

Three days after a 90-point performance against Indiana, Michigan’s offense struggled against a stifling Spartan defense. For much of the first half, the Wolverines were out of sorts, tentatively probing around the perimeter instead of attacking.

“We came to the bench, and I told myself and my teammates, ‘I think we’re playing way too fast,’ ” Walton said. “We were just getting sped up. It wasn’t really much of their pressure. … I just think we need to play with better poise and take better shots.”

So Walton, like he often has, led by example. He opened the second half by draining threes on consecutive possessions. He would spend the rest of the game single-handedly carrying his team’s offense, scoring 19 of his team’s 34 second-half points. Most of his production came off dribble penetration into the paint, where he drew fouls from defenders often much bigger than him.

With Muhammad-Ali Abdur-Rahkman and Moritz Wagner limited by foul trouble and Zak Irvin dealing with the flu, it was up to Walton to make things happen off the bounce. The offensive burden was on him, and he shouldered it as best as he could, to the tune of 24 total points, three offensive rebounds and five assists.

It turned out that wasn’t enough on Sunday. But, as his team continues to search for its first true road win, Walton’s performance at Breslin may still serve as a spark, for veterans and youngsters alike.