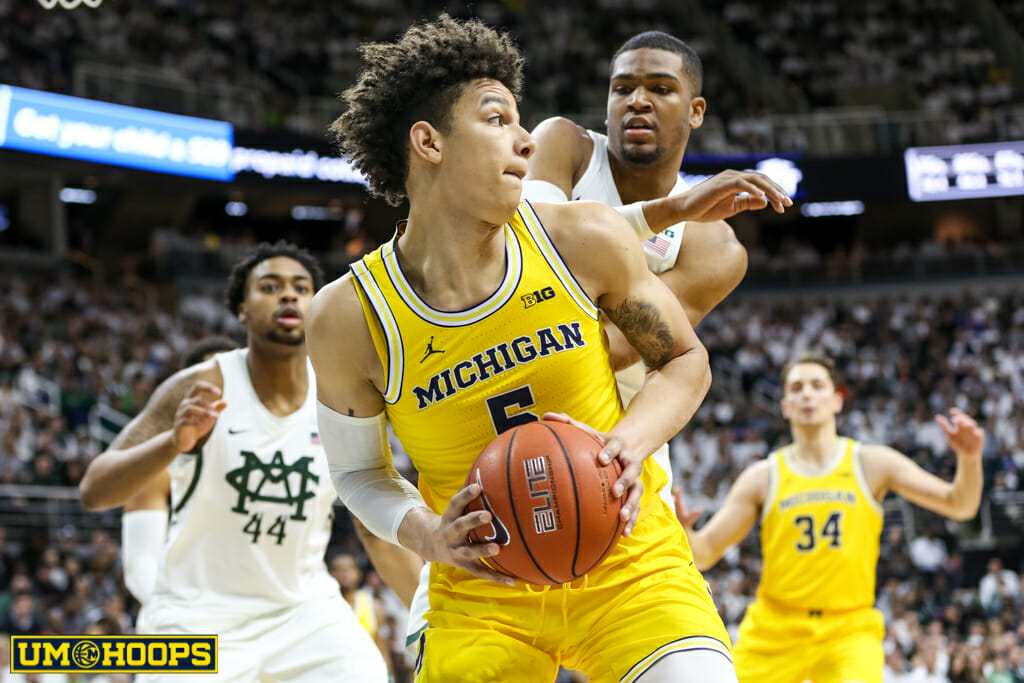 Driving towards the basket opens up so much for the Michigan offense, such as open threes for Duncan Robinson, who’s got to be ready to shoot.

Michigan is still learning how to run effective offense when the opposition defends close on the perimeter. When a team defends them like Indiana did on Thursday, giving the Wolverines freedom to operate and space to shoot early on, Michigan’s offense hums. The players get comfortable and confident and often start making more difficult shots.

Michigan State did not give the Wolverines that luxury on Sunday afternoon. The result, especially in the first half, was many possessions in which Michigan passed the ball around the perimeter before attempting a contested jumper as the shot clock neared expiration. The one point per possession was Michigan’s third-worst offensive performance of the season.

After the Nebraska game two weeks ago, Michigan coach John Beilein talked about the need to play through contact and to get into the lane on drives. “We’ve still got some guys that on that first bump (from a defender), they pick it up (their dribble). Many refs will make you play through the first bump if it’s not egregious. … We like to shoot that jump shot. We like to pull it back instead of getting two feet in the paint.”

Michigan shot 7 of 26 from three against the Spartans, and not enough of the attempts came as a result of a strong drive that collapsed the defense. Derrick Walton carried the offense in the second half, getting to the foul line 13 times. He attempted 15 free throws total, but his teammates only shot a combined four free throws.

In his postgame remarks, Beilein once again mentioned playing through contact. “You can’t settle, and we did it, and it cost us.”

It’s clear that was his message to the team in the locker room immediately after the game, as the players who met with the media echoed those sentiments.

Michigan often has five three-point-shooting threats on the floor at the same time, a rare luxury. Shooters, if guarded tightly on the perimeter, open up driving lanes. The Wolverines must take advantage. They can’t complain about how hard it is to defend the downhill attack without fouling and yet not try to get to the basket (or the foul line) when they have the ball.

Duncan Robinson is one of the best catch-and-shoot players on the country. He made 95 of 210 (45 percent) three-point attempts last season and is at 41 percent this year. Yet, for some reason, he turns down open looks. While he did attempt six threes against Michigan State (making two), there could have been more. And at least a couple of those attempts came after he passed up what looked like a better opportunity earlier in the possession.

Here’s Beilein on Robinson after the Indiana game on Thursday: “I want him to shoot every time he gets it. I just want to let it ride because I see it in practice. But he can’t come off a screen and say, ‘Am I open?’ He’s got to think he’s open and turn down the shot instead of measure it.”

A shooter as good as Robinson shouldn’t hesitate if he’s got a crack of daylight nor should he stop firing if he misses a couple. You can be sure Beilein will be reminding him of this in the next film session.

Well, there’s a reason Michael Jordan’s “flu game” is so memorable. It’s not normal to play well when you’re severely under the weather. Zak Irvin missed practice the last two days with the flu and was not at 100 percent on Sunday. The senior was held scoreless for the first time in his career in a game in which he played more than 15 minutes (he played 36).

“It was obvious that he wasn’t himself,” Beilein said, though Irvin told Beilein at half he was fine.

When asked if he gave any thought to playing Irvin less, Beilein said, “We were trying to, but Muhammad (Ali Abdur-Rahkman) was in foul trouble. When you look back at it, it probably was the right thing to do. (Irvin’s) one of our best passers, he’s one of our best scorers, he plays three different positions for us. It’s hard to take him out of there as long as he tells me he felt right.”

Abdur-Rahkman picked up his first foul at the 18:43 mark of the first half, his second with 9:59 left, his third with 13:52 in the second half, and his fourth with 8:59 to go. He played just 15 minutes. Beilein hoped Irvin would get going, but it never happened. He finished o for 8 from the field with three turnovers.