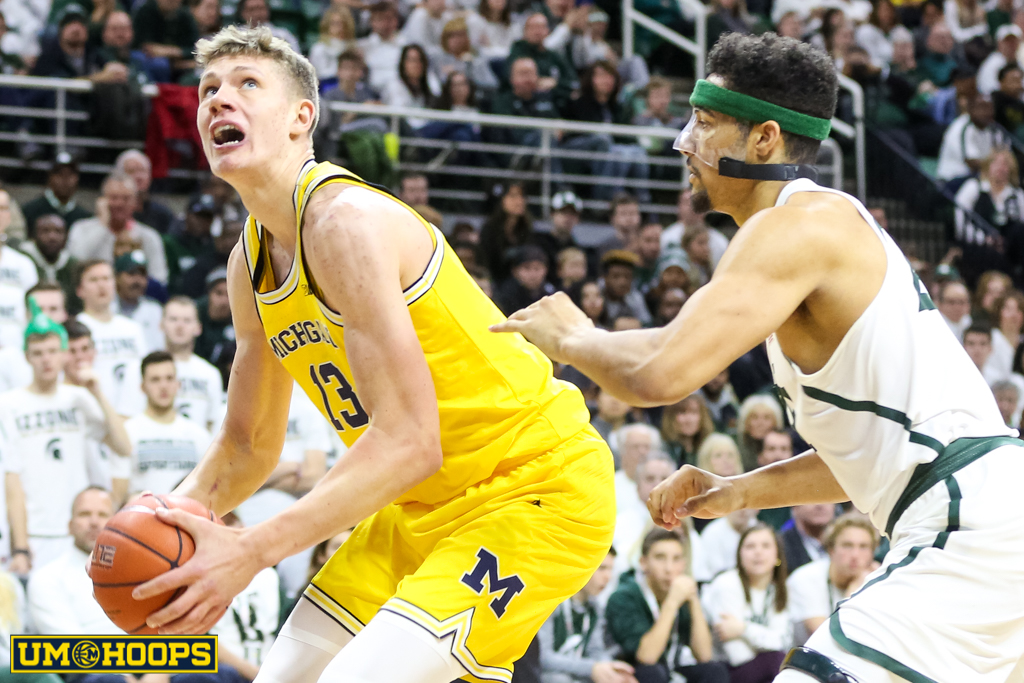 John Beilein shared his thoughts on unproven players in the rotation and Michigan getting more touches in the post in advance of tomorrow’s game with Ohio State.

Michigan has played through its big men more this season than in the recent past, simply because Moritz Wagner and DJ Wilson are really good. Specifically getting them the ball in the post has been a focus, but not yet a strength.

Wilson doesn’t look all that comfortable with his back to the basket. Wagner is shooting 69 percent on twos this season, but is more comfortable facing up and is developing his back-to-the-basket game.

“As this game continues to evolve, one thing doesn’t change,” John Beilein said. “If you’ve got a good post man and you throw it to him it simplifies a lot of things.”

It doesn’t take an insider to look at the Michigan roster and realize Wagner and Wilson will play even bigger roles next season. It would make Beilein happy if the Wolverines could eventually borrow some of Wisconsin’s action offensively—feeding the post for baskets inside or to pass out of it for open threes.

That progression is also still a long ways off as just 4.2% of Michigan’s offensive possessions are shots or passes out of the post. That’s the smallest percentage in the Big Ten and well behind teams like Purdue (25.7%) and Wisconsin (23%) that play predominantly out of the block. That doesn’t mean that Beilein doesn’t want to see more.

“They’ve got to embrace it,” Beilein said of his bigs, citing examples from the Michigan State game and a recent practice in which the ball got inside in a one-on-one situation and was kicked back to the perimeter. “Do you want the ball or not?” he’s asked. It remains a work in progress.

Wagner said last year there was no chance he was going to command the ball in the paint against big fellas in the Big Ten.

“It’s different now (that I have) more experience. Coach Saddi (Washington) is doing a tremendous job of establishing a routine with us that we do every day. It gives us bigs tremendous opportunity to develop skills and trust in our own abilities.”

Before the season, Beilein was optimistic about his team’s depth. He thought it would especially help defensively. If guys got tired or didn’t commit to defense, they would be replaced. The season has not played out that way.

In Michigan’s nine Big Ten games, six players have averaged at least 20 minutes; Mark Donnal is at 10.4 and Xavier Simpson is at 8.8.

On Friday, Beilein talked about “befuddling” defensive mistakes that, in some cases, have been repeated since last season. The staff has been “trying everything” to motivate players, but the threat of the bench hasn’t been a legitimate option.

Simpson can provide some good one-on-one, on-the-ball defense for a few minutes at a time, but he and Ibi Watson (who hasn’t cracked the rotation) have not provided as much as Beilein was hoping or expecting. And Beilein is not going to roll the dice with them should someone else struggle, as a flu-affected Zak Irvin did against Michigan State.

“We need to get Ibi and X out there. They just have to play better in practice,” he said. “There’s a ceiling that they hit, and we’ve got to push them through it. The best option for me, always, is a guy with a proven track record—stick with him through that and hopefully he’ll get it going—as opposed to just throwing someone in there that you don’t see consistently in practice excelling.

“If he’s not excelling against Andrew Dakich and Sean Lonergan and Brent Hibbits every day, it’s hard to say he’s going to excel in the game. … If they do show it to me in practice—and we’re very hopeful that happens—then it’s a different ballgame. But if Zak Irvin tells me he can play and we’re not doing further damage (to his health), he’s going to be in the game. In a few years, Ibi Watson, I’ll do the same thing with him.”

In other words, don’t expect any major rotational changes.

Ohio State coach Thad Matta said in his press conference today that sophomore guard JaQuan Lyle, the Buckeyes’ second-leading scorer, hurt his ankle in practice yesterday and was not expected to practice today. An unidentified player was also expected to miss practice after getting his “bell rung.”

Matta was hopeful that both will be able to play tomorrow.

It is alumni weekend in Ann Arbor, and Michigan will be honoring the 1977 Big Ten championship team. Coached by Johnny Orr, the Wolverines went 26-4 (16-2 in the Big Ten) that season.