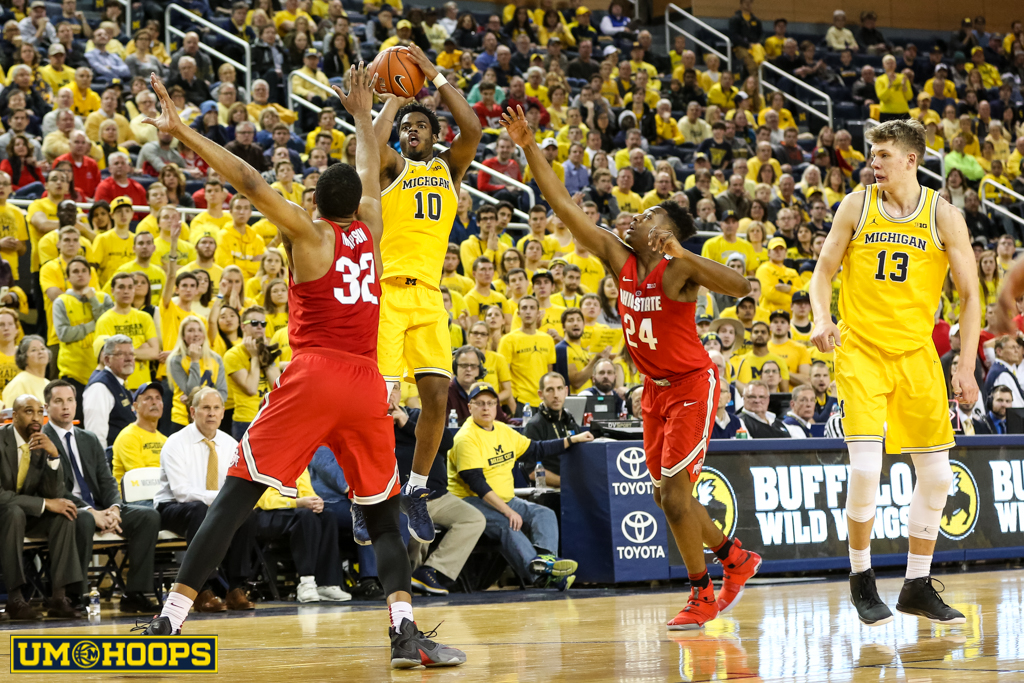 Michigan was dominated on the glass and couldn’t score inside the arc as it let one slip away at home to Ohio State.

Michigan’s offense looked well-rehearsed and unstoppable when it took the floor on Saturday night.

16 points by 5 players in 8 possessions.

The Wolverine offense was so crisp it looked like it could have been a practice walk through of how they wanted to attack Ohio State. Moritz Wagner scored on a drive to the lane, DJ Wilson swooped into the lane and hit a turnaround, Derrick Walton hit a three in an unsettled break, Zak Irvin flashed to the basket with a great cut and knocked in a three off the catch.

The Wolverines quickly extended their early lead to 11 points with over 14 minutes to play in the first half and watched Ohio State’s leading scorer, Jae’Sean Tate, take an early seat on the bench with 2 fouls. Another home blowout felt inevitable, but the Buckeyes didn’t pack up and head home, they dug in.

Ohio State cut the lead to a single possession by the next media timeout and played volleyball on the backboard en route to a 1-point halftime lead. The Buckeyes seized control of the game with a quick start to the second half, watching Michigan’s frontcourt take a seat on the bench with 3 fouls a piece, and left the Wolverines to play catch-up for the rest of the night.

Derrick Walton gave Michigan everything he in the tank and then some, finishing with 25 points, 10 rebounds and three assists in 37 minutes, but he came up just one shot short in the end — missing a baseline pull-up jumper that would have tied the game with :25 seconds to play.

He also didn’t have much help. Zak Irvin played another poor game and Michigan’s big men battled foul trouble and inconsistency for much of the night.

Michigan’s offense was as three-point happy as its been all season. Many of the tropes that are thrown around with respect to Michigan’s three-point heavy offense miss the mark — three-point reliant offenses can be very good — but there were some major concerns on display tonight. Michigan only made 1 shot inside the arc in the second half.

I’m not sure what changed — especially given that the early makes were textbook cuts, drives and finishes that appeared to be relatively uncontested — but it didn’t work. Derrick Walton made three-pointer after three-pointer and willed Michigan to 1.02 points per possession but this was a broken offensive performance. Michigan turned the ball over twice as many times as it scored inside the arc and just wasn’t able to get anything going outside of Walton.

On the other side of the floor, the Wolverines were unable to overcome their inability to grab a rebound. Ohio State rebounded 48.5% of its missed shots — U-M’s worst defensive rebounding effort of the season — racked up 19 second chance points. Both Thad Matta and John Beilein commented on how Michigan’s aggressive switching on the perimeter seemed to take the Wolverines out of proper defensive rebounding position.

There were several offensive boards where Jae’Sean Tate or Trevor Thompson just overpower Wolverine defenders, but there were also plenty of Buckeye misses that seemed to bounce a couple times on the floor while the Wolverines were still trying to figure out who they were guarding. On the positive side of the ledger, this was Michigan’s best eFG% defensive performance of the Big Ten season and they forced turnovers on a quarter of Ohio State’s offensive possessions.

This loss and the Virginia Tech loss stand out as the most painful of the season. Two teams that Michigan clearly was capable of beating but just let slip away on its home floor. NCAA Tournament teams don’t lose those games and the clock is ticking. There are only so many more chances to get those critical wins.

Sitting at 4-6 in the league with only three home games — two of which come against the league’s top two teams — it’s starting to become now or never. I think the baseline target is probably 5 more wins — pushing the record to 9-9 in league. But it isn’t going to get any easier, a realistic path would look something like wins over Michigan State, at Indiana, Wisconsin, at Rutgers and Purdue at home. Possible? Sure, but there’s only so many more second chances.