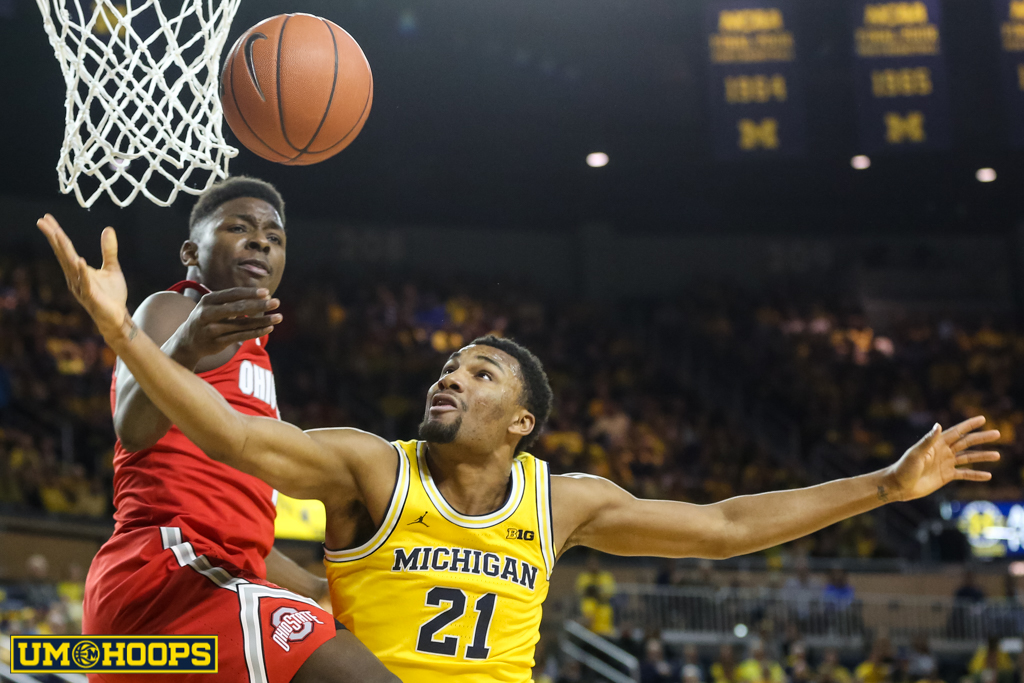 The Wolverines struggled mightily to keep Ohio State off the glass, and it cost them a critical game.

John Beilein was asked about his team’s effort, outside of Derrick Walton, against Ohio State. “I thought it was OK,” he said, before immediately offering a qualifier: “For who we are. There are no junkyard dogs out there, we know that. But I thought they gave a great effort.”

It’s natural for reminiscing Michigan fans to wish NBA players like Trey Burke or Nik Stauskas were still in maize and blue. But this team really misses a player like Jordan Morgan, who was at Crisler last night. The former center provided muscle inside and rebounded well, traits that Michigan needed on Saturday.

Ohio State grabbed 16 offensive rebounds (48.5 percent of its misses, the highest-rate Michigan has allowed this year) in its 70-66 win. At times it seemed like Michigan would only get the ball back if Ohio State scored or carelessly turned it over. There were two first-half possessions in which the Buckeyes got two offensive rebounds before scoring, and one in which they got three.

“They switch a lot (defensively),” Ohio State coach Thad Matta said of Michigan. “So we had some advantages in there size-wise.” Upperclassmen Trevor Thompson (six offensive boards) and Jae’Sean Tate (three) were monsters on the glass, and Beilein singled them out after the game, saying the Michigan frontcourt was “overmatched” physically.

“Thompson has probably been down near that basket his whole life,” Beilein said. Moe (Wagner) hasn’t been there very much. That was a physical matchup. And Tate has been there, playing big minutes for three years—not a good matchup for DJ (Wilson).”

But keep in mind that Ohio State’s Andre Wesson grabbed four offensive rebounds in 16 minutes. He’s only a freshman.

“Some of the rebounds, as I watch it, will not be about effort,” Beilein said. “It will be about the ball bounced to them or they had really good positioning, or it was just about mix-ups on defense—where a guy either got blown by or we missed something somewhere along the line. When a guy steps off to give help and his man slides in and wedges you and gets a rebound—there’s no boxing out; he’s boxed you out before you could ever get there.”

It’s hard to pinpoint the problem with the Wolverines’ rebounding (in Big Ten play, they’re last in offensive rebounding and 10th out of 14 on the defensive glass). Halfway through the first half last night, when Ohio State got four shots on one possession, a lot went wrong. Mark Donnal moved to front Thompson in the post just as an outside shot went up, giving Thompson inside positioning. Michigan’s guards stood still as Thompson missed. The ensuing rebound put Michigan in scramble mode and out of position.

It certainly didn’t help that Wagner (who fouled out) and Wilson were in foul trouble and played a combined 47 minutes. But aside from Walton, who’s always been a great defensive rebounder despite his size and grabbed 10 boards last night, there wasn’t enough urgency on the glass.

“I could just see that Derrick wanted it a little more than the rest of us,” said Muhammad-Ali Abdur-Rahkman, who was second on the team with seven rebounds. “I think we all have to get that and want it just as much as he does.” When it’s suggested that it’s time to stop simply talking about that, Abdur-Rahkman said, “I think so too. It’s just frustrating when you go out there and let a game slip like that.”

This space has talked about Michigan seemingly needing external motivation to play its best. Abdur-Rahkman was asked about that after the game.

“I think we’re all nice kids and we need something, that extra push to set us off and have that extra motivation going into games. … That’s what we’ve been trying to work on, trying to get that motivation from something else other than bulletin board material. … Get that from our inner selves.”

So far, they haven’t been able to, and that would be true even if Walton had drained a three—instead of missing a midrange jumper—in the closing seconds and Michigan had won.

“We’ve got a lot more opportunities in front of us to make our dreams a reality,” Walton said. He’s absolutely right. Michigan’s NCAA Tournament chances are not dead, not with Michigan State, Indiana, Wisconsin, Minnesota, Purdue, and Northwestern still on the schedule. Of course, after a home loss to Ohio State dropped the Wolverines to 4-6 in the Big Ten, you’d be excused for not having much confidence Michigan will win many of those games.