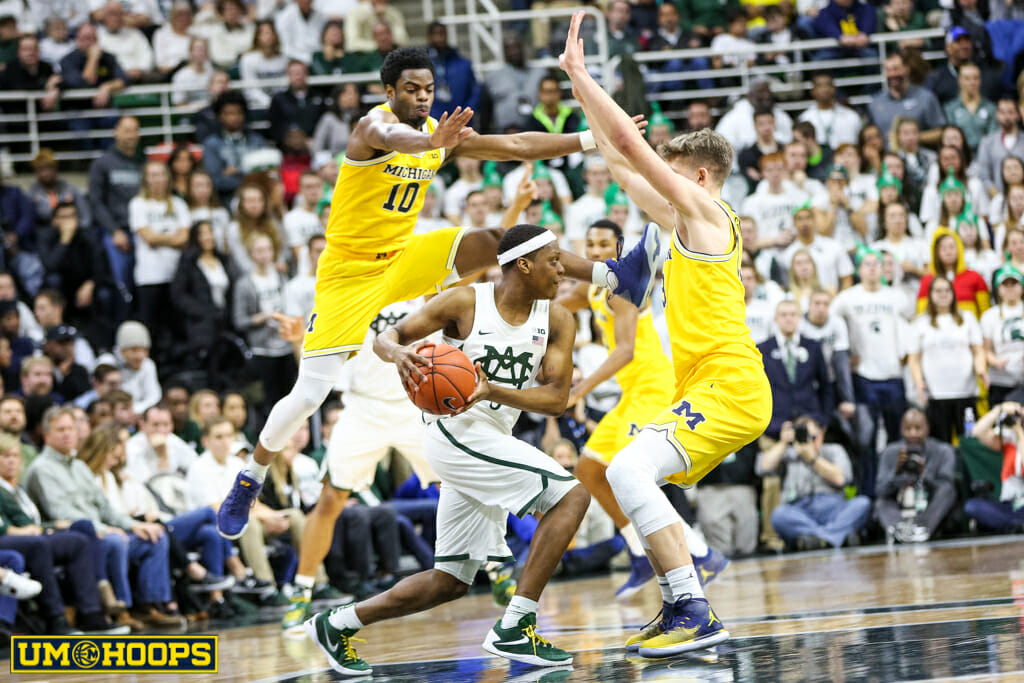 For the second time in 10 days, Michigan will face its in-state rival — this time with its back squarely against the wall.

The Wolverines have not only lost two games in a row with their NCAA Tournament chances on life support, they’ve also dropped their last five against the Spartans.

When the Wolverines traveled to East Lansing a couple weeks back, they were the ones coming off back-to-back wins and Michigan State was slumping. Propeled by a rivalry victory, the tables have flipped. Michigan State has wo two in a row and looks poised for a run while Michigan just lost at home to its other rivals to the south.

Despite some of their early struggles offensively, the Spartans seem to be rounding into form on that side of the ball. They’ve scored at least a point per possession in their last five games after reaching that mark just once in the first five league games (vs. Rutgers).

It might sound surprising given that their offense ranks as just the 7th best offense in the conference, but the Spartans are the 2nd best shooting team in the league. They make 51.8% of their twos (3rd) and 41.5% of their threes (2nd) for a 55.4 eFG%. Over the last five games, the Spartans have knocked in 49% of their threes and have been as hot as anyone in the Big Ten. There are two reasons that the MSU offense has still struggled at times: turnovers and offensive rebounding. Michigan State ranks 12th in the league in turnover rate and 13th in offensive rebounding. The Spartans do an average job of getting to the free throw line, but are making just 67% of their free throws.

Michigan State’s defense excels in two primary areas: 2-point field goal percentage defense and defensive rebounding. The Spartans rank 4th in the Big Ten in 2-point defense at 44.5% and rebound 70.9% of their opponents’ misses (3rd). The Spartans can be foul happy — 39.2% FTA/FGA — but they block the second-most shots in the Big Ten.

Future NBA lottery pick Miles Bridges scored a handful of critical late baskets in the first meeting and proved very difficult for DJ Wilson to handle off the bounce. Bridges is shooting 58% inside the arc, but more impressively 44% from three-point range.

6-foot-8 freshman Nick Ward didn’t miss a shot in the first meeting, but he only played 16 minutes. He’s played fewer than 20 minutes in MSU’s last three games, but I can’t imagine Michigan State coaches watching film from the last game and not hoping to get Ward more than 6 shots in the rematch.

It feels like senior guard Eron Harris is inconsistent, but at the end of the day he’s a 40% three-point shooter who has to be tracked on the perimeter. He’s topped 20 points in 2 of the last eight games, but been held to single digits in the other 6.

Tom Izzo gives more minutes to his bench than any coach in the country as Spartan reserves account for 45.5% of available minutes. Other than Bridges at 30.5 minutes per game, Michigan State’s next 8 rotation players average between 17 and 24 minutes per game. Only Bridges and Ward average double-figures, but just about every wing that will play off the bench is capable of getting hot from three.

Freshman point guard Cassius Winston touts the best assist rate in the country at 49.4%, but he’s struggled with turnovers as well. Winston had one of the best games of his career against Michigan as the Wolverines struggled to keep him out of the lane. His 11 free throw attempts against Michigan were more than he’s racked up in the rest of the Big Ten season.

While Winston comes off the bench, defensive specialist Lourawls Nairn starts at the one. Nairn’s offensive game has progressed (he’s made 5-of-12 Big Ten threes), but where he really excels is on defense and pushing the tempo in transition.

Matt McQuaid hit three triples against Michigan in the first meeting, but has been slumping. He’s also one of the better players in the Big Ten at drawing offensive fouls. Five-star freshman Joshua Langford is shooting 46% from three-point range and attempts roughly half of his shots from deep. Senior combo forward Alvin Ellis has been playing the best basketball of his career this year, and like many of his wing counterparts makes over 40% of his threes.

MSU’s wings aren’t much of a threat to do much off the dribble, but they make it very difficult to double team either Ward or Bridges because of their ability to catch-and-shoot.

Backup big man Kenny Goins is coming off of a career game at Nebraska (10 points on 5-of-5 shooting) and even knocked in a mid-range jumper, but he’s mostly a glue guy, rebounder and defender who can finish the occasional drop-off pass.

Michigan is running out of mulligans if it hasn’t already. The Wolverines have dropped too many games that they were favored in or should have won and this is yet another. KenPom gives Michigan a 67% chance at victory, projecting a 69-65 final.