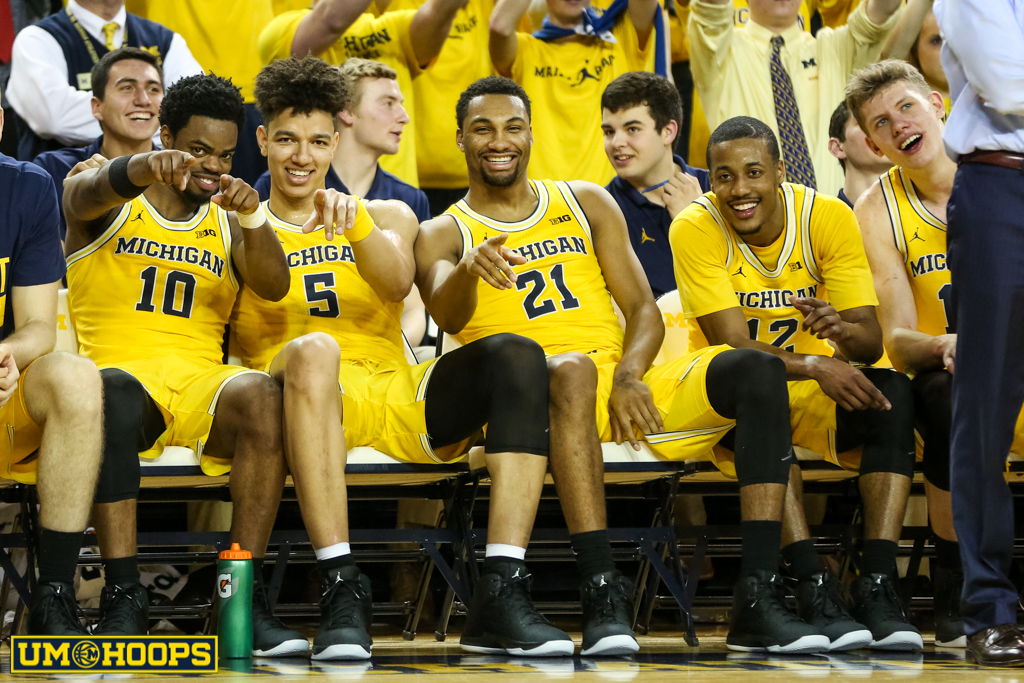 I’m not sure where to look up historical stats on shot clock violations, but I can’t remember a time when Michigan forced four of them in one half, maybe even in a game. That stat is especially impressive considering just how quickly Michigan State initiates its offense. The Spartans are usually into their halfcourt set three or four seconds into any given possession.

The theme in all of these plays is that Michigan’s defense was sound. They didn’t give up easy drives to the hoop, they hedged, helped and recovered in the ball screen game, applied ball pressure and were just more active than we’ve seen most times this season.

This defensive effort is a good place to start, now it’s time to see if the Wolverines can generate any carryover.

Derrick Walton is playing the best basketball of his career and I’m not sure there’s a point guard in the league who is playing better right now.

Tom Izzo quipped that Walton played like the game was “the most important thing in his life”, but Walton has been playing like this for a couple of weeks now.

In this cut-up of plays from the first half, it really stands out just how comfortable Walton is leading the team on both ends of the floor. He was controlling the ball, making plays all over on defense, finding his teammates, and of course hitting big shots. I can’t remember Walton looking this comfortable and in charge of the offense at any point in his career.

“I can’t say enough about Derrick Walton right now, the transformation in the last month,” Beilein said. “If you remember, he came in with a star-studded team and then he was sort of forced into being a leader probably when he wasn’t really ready to do that when we had the injuries.

“Now I think he’s finally comfortable, with all that experience he gained, to really play with that ‘extra’ that you need to be a really good player, especially a guard. He’s become so strong with the ball.”

A month ago this was Zak Irvin’s team, but at this point it is quite clearly Walton’s. He’s been dominant and it looks like the Wolverines will go as far as he can take them.

To say the first 23 games of Xavier Simpson’s career had been disappointing would be an understatement. But it has to be mentioned that he hasn’t really gotten a chance either. It’s almost impossible to build any sort of offensive rhythm or confidence when you are going to be on the floor for a couple of minutes and then sit for the final 30.

Beilein opted to give Simpson more of a chance on Tuesday, a decision that he emphasized wasn’t so much his own as it was Saddi Washington’s. The Wolverines simplified the scheme when Simpson was in the game and urged his natural abilities to take over — stop thinking and start playing.

The move worked as Simpson got to the basket with an early and-one and was given a jolt of confidence. That was all it took as he added a three-pointer and another floater at the rim in the best game of his career.

Moritz Wagner is a lot to handle, there’s no doubt about that. Tom Izzo referred to him as a ‘pain in the butt’ while defending, but not really defending Nick Ward’s trip, and even John Beilein is trying to get him to balance his brilliant plays with fewer frustrating ones.

“Moe has to be able to put it in the right direction. He plays with everything that he’s got,” Beilein explained. “We don’t want to rob him of that. We need that very, very badly. There are these moments where he’ll just get too excited and leave a man wide open or throw the ball away. It’s what’s going to make him a great player.”

The key for Wagner tonight was that he attacked the rim consistently and was able to get there and finish. He also was able to stay on the floor and out of foul trouble. Turnovers are becoming a concern for the 6-foot-10 German as he struggles to pass out of drives and post-ups, but his ability to get to the rim is enough to get him as many touches as he can handle.

5. Closing the first, starting the secret

It’s no secret that Michigan has struggled to finish and open halves. The Wolverines were horrible out of the gate in the second half versus Ohio State and dug themselves into a big hole. With an early lead in hand on Tuesday night, the stakes weren’t quite so high this time around, but Michigan took care of business and put the game on ice.

Closing the first half on an 8-0 run and opening the second on a 4-0 run stretched the lead to 30 points and turned it into a laugher, but if you reverse those numbers even just a bit then the game turns competitive in a hurry.