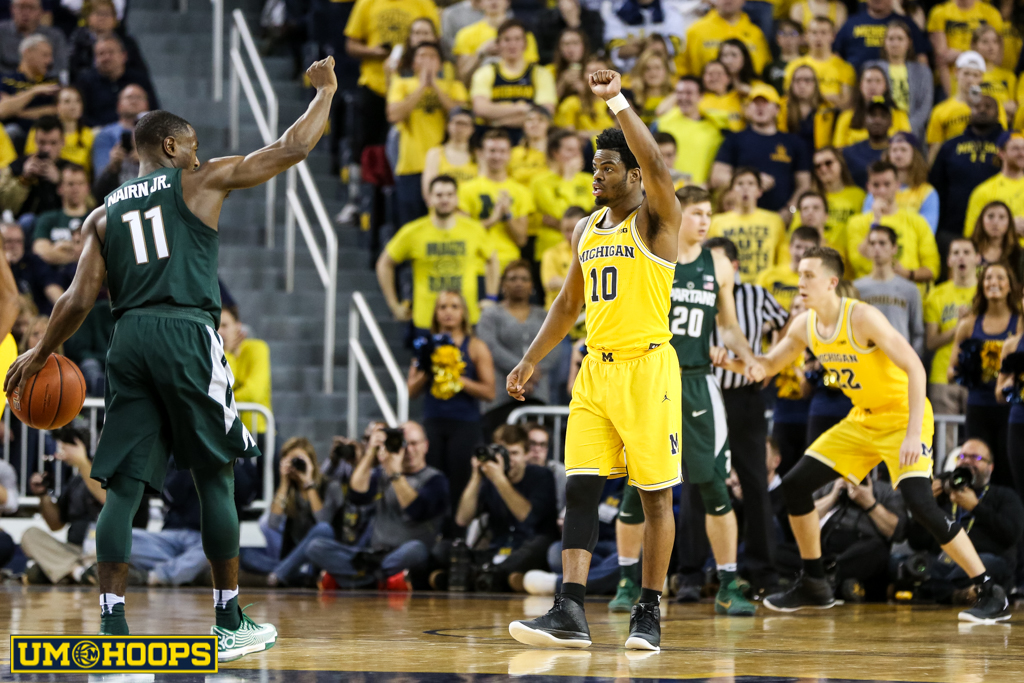 Derrick Walton has elevated his game with hot three-point shooting, finishing at the rim and pick-and-roll efficiency. Here’s a closer look at his breakout.

Michigan point guard Derrick Walton has gone from an enigma to the driving force behind Michigan’s offense. The 6-foot-1 senior was projected by some as an All-Big Ten player after a promising freshman year, but up until this point he never quite put everything together. His sophomore year was derailed by a foot injury and his junior year was up-and-down. Now, in the final weeks of his career everything has started to fall into place.

The wins haven’t always been there — Michigan is just 4-3 over its last 7 — but Walton has been a different player since his first half technical foul at Illinois. It was Walton who called the team meeting after the Illini called Michigan ‘white collar’ and it has been Walton who has answered the challenge.

Over the last month, Michigan has handed Walton the keys to the offense. It was a gradual shift at first, but it has been magnified over the last three weeks. His usage rate, efficiency and scoring have all taken off fairly significantly over the last few games.

Here’s a look at all three metrics over the course of the season with a three-game running average.

It should come as no surprise to see those numbers spiking after four-straight 20+ point performances, but Walton’s efficiency numbers are bordering on ridiculous.

His offensive rating of 131.5 points per 100 possessions in Big Ten play ranks 1st among players that use at least 20% of their team’s possessions. The 11.6 gap between him at No. 2 on the list, James Blackmon Jr., is equal to the gap between Blackmon and the 11th spot in the league.

The raw counting stats are also impressive: 5th in scoring at 16.5 points per game, 18th in rebounding, 10th in assists, 3rd in made threes, 5th in assist-to-turnover ratio.

It feels like it almost happened overnight, but suddenly Walton is among the legitimate contenders for an All-Big Ten spot.

Derrick Walton is one of the best shooters in the Big Ten, he just happens to play point guard as well.

He always had the hard part (three-point shooting) figured out, but now he’s rediscovered his ability to score inside the arc. Walton is finishing at the rim (62% within 5 feet in Big Ten play) and he’s knocking down the elbow jumpers that plagued him for years.

His sudden ability to make twos has turned him into a vastly more complete player. We compiled his historical shot charts with the help of Krossover to show his progression from freshman year to senior year, breaking his senior year into non-conference and Big Ten.

The hot three-point shooting from the wings and up is great to see in league play, but look at the numbers inside the arc to see Walton’s real development. He’s playing more aggressive, he’s attacking and he’s finding results.

And this isn’t the case of Walton stealing a bunch of cheap easy baskets in transition. He’s shown the ability to make a play attacking the rim in the halfcourt and finish through contact. Here are a few examples of plays that Walton has made over the last few weeks that were absent from his game in the past.

The finishes at the rim have been tough, but only half of Walton’s improved two-point shooting. He’s also connecting on his jumpshots off the dribble at a high rate. Walton has a 55 eFG% on off-the-dribble jumpers in Big Ten play. In non-league play, he managed just a 42% eFG% on jumpers off the bounce.

Many of these looks have been tough, and some regression might be inevitable, but they have all been big time shots.

Walton has always been solid in the pick-and-roll game thanks to his ability to knock down the three, but he’s struggled to find the roll man in the past. His inability to attack the basket has also made him fairly one dimensional as a scorer.

Walton has started to change that and is one of the most efficient ball screen players in the conference this year. Breaking down the season-long numbers, Walton is the only Big Ten player to create more than a point per possession out of ball screens (including pass outs) among players who have used at least 6 pick-and-roll possessions per game.

He’s still a pass-first point guard, and his crutch is passing to the best pick-and-pop big man in the conference in Moritz Wagner (he’s scored almost 50% more points as a pick-and-pop big than anyone else in the league), but he’s been doing a much better job of finding the roll option.

We broke down a few of Walton’s recent feeds in the roll game and you can see him making confident passes in tight windows that result in easy baskets.

At this point we almost take it for granted, but it is incredibly rare to see a 6-foot-1 point guard that can rebound like Walton.

Walton is only 7 rebounds short of becoming the Big Ten’s 12th player to reach the 1000 point, 500 rebound, 400 assists milestone. He’s be the first Wolverine and I’d have to imagine he’ll be one of the shortest players on the list.