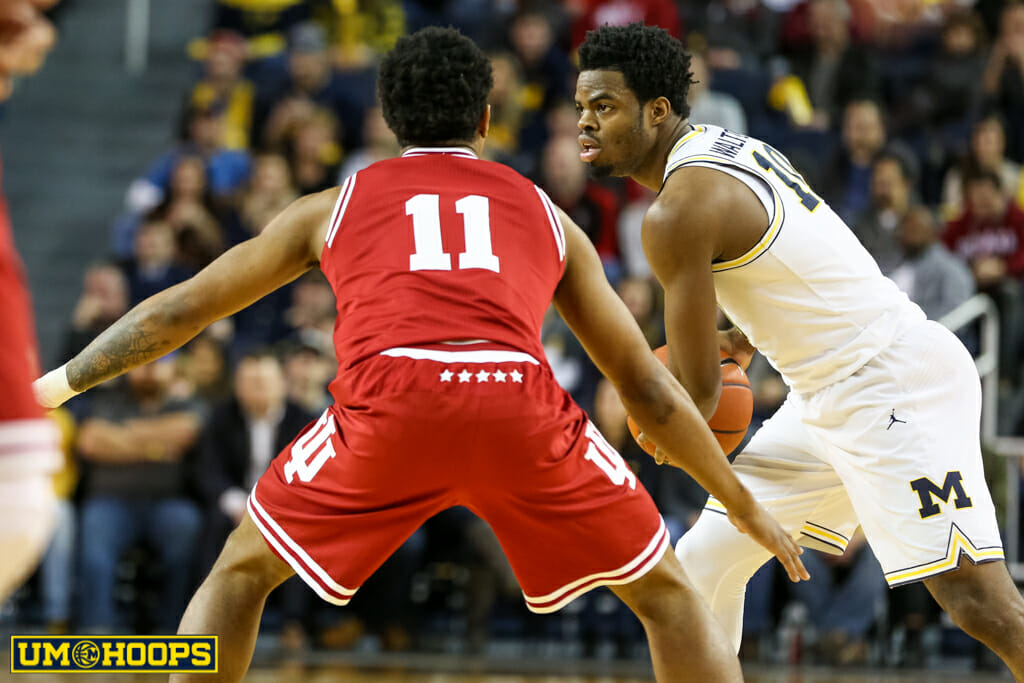 Michigan travels to Assembly Hall this weekend, a venue where it has won only once in its last 17 tires with that win against one of the worst Indiana teams in history.

Michigan travels to Assembly Hall this weekend, a venue where it has won only once in its last 17 tires with that win against one of the worst Indiana teams in history.

Waiting for them will be an Indiana team that started the season with promising wins over North Carolina and Kansas, but has now lost 4 of its last 5 with a triple overtime win over Penn State.

Michigan just blew out its instate rival at home while Indiana lost to Purdue at home on Thursday night. The Wolverines have more rest and momentum, but at the end of the day this is a game between two teams that need as many wins as soon as possible to get serious about making the NCAA Tournament.

The Wolverines beat the Hoosiers by 30 points at home a couple of weeks ago, but replicating that on the road — against any Indiana team — would be impressive.

This is a battle of two offense-first, defense-last teams. Michigan’s offense ranks 1st in the Big Ten, Indiana’s ranks 3rd — the two teams also have the conferences worst defenses. Michigan rattled off a ridiculous 1.54 points per possession in its 30-point beatdown at the Crisler Center, but Indiana’s defense has shown gradual improvement since then.

Indiana’s offense is good, but doesn’t appear to be nearly as elite as it once was. Part of that is playing without James Blackmon for a few games, but the other part is that it’s just hard to be great offensively when you turn the ball over all the time. The Hoosiers turned the ball over on at least 20% of their possessions in their last 5 games and their best offensive performance in that span is just 1.07 points per possession. To put that into context, Indiana only played one game worse than that mark in the first 7 games of league play.

Defensively things have improved, but not enough to make a dent in the bottomline. The Hoosiers are ranked 9th or worse in all four defensive factors and they hit rock bottom defensively against the Wolverines. Indiana doesn’t block many shots and allows opponents to make 49.1% of their twos (10th) yet still fouls more than anyone in the conference. It’s hard to win games when you are turning the ball over and sending opponents to the line as often as anyone in the Big Ten.

Junior guard James Blackmon was shut down by Muhammad-Ali Abdur-Rahkman in Michigan’s win last month before suffering an injury late. He missed 3 games before returning last night against Purdue. Blackmon had 11 points on 14 shot attempts in 32 minutes in his return and while he might have been rusty, he’s still Indiana’s leading scorer. He’s a shooter first (60% of FGA are 3s), but he’s efficient inside (60%) and outside (40%).

Robert Johnson is a very good two way player, shooting 49% inside the arc and 45% from outside in Big Ten play, but he’s also been in a major cold streak. The junior guard has made just 3 of his last 17 threes and has turned the ball over 13 times in the last three games.

Sophomore big man Thomas Bryant is one of the best post players in the conference and he’s capable of dominating on any night. Happ, Swanigan and Ward are all great, but Bryant deserves to be right in that mix. He shoots 62% on twos (an impressive number for a guy who isn’t just a finisher but also a post-up scorer) and 44% on threes. Bryant scored 13 points on 6 shot attempts in the first meeting and you can bet that Crean will be looking to get him more touches in the rematch.

Pitt transfer Josh Newkirk has been on fire from distance of late. Newkirk has made 10 of his last 17 three-point attempts after starting Big Ten play on a 2-of-14 slump. The biggest difference in this IU team and other recent IU teams is that Newkirk isn’t Ferrell — not a knock on Newkirk so much as credit to just how good Ferrell was — but give the 6-foot-1 junior credit for knocking down shots of late.

In the first meeting, Juwan Morgan was still recovering from an injury and played limited minutes. Michigan took advantage of Zach McRoberts playing heavy minutes in his place — almost refusing to guard him and allowing DJ Wilson to provide help in the paint — but probably won’t have that luxury as often in the rematch. Morgan is healthy and back in the lineup and gives the Hoosiers a bit more versatile of an option at the four.

Backup big man De’Ron Davis took a shot to the face and didn’t return against Purdue, but it sounds like there’s no serious injury. Davis is more of a traditional back to the basket big and he played limited minutes in the first meeting as IU looked to deal with Michigan’s attacking bigs.

It’s a trip to Assembly Hall where Michigan never wins and game-winning charges are ruled double fouls. I wouldn’t blame you for lacking confidence in the Wolverines (0-6 on the road) at this point in time. Michigan is clearly capable of beating the Hoosiers after waxing them by 30, but KenPom projects a 73-70 Hoosier win, giving U-M a 40% chance at the road upset.