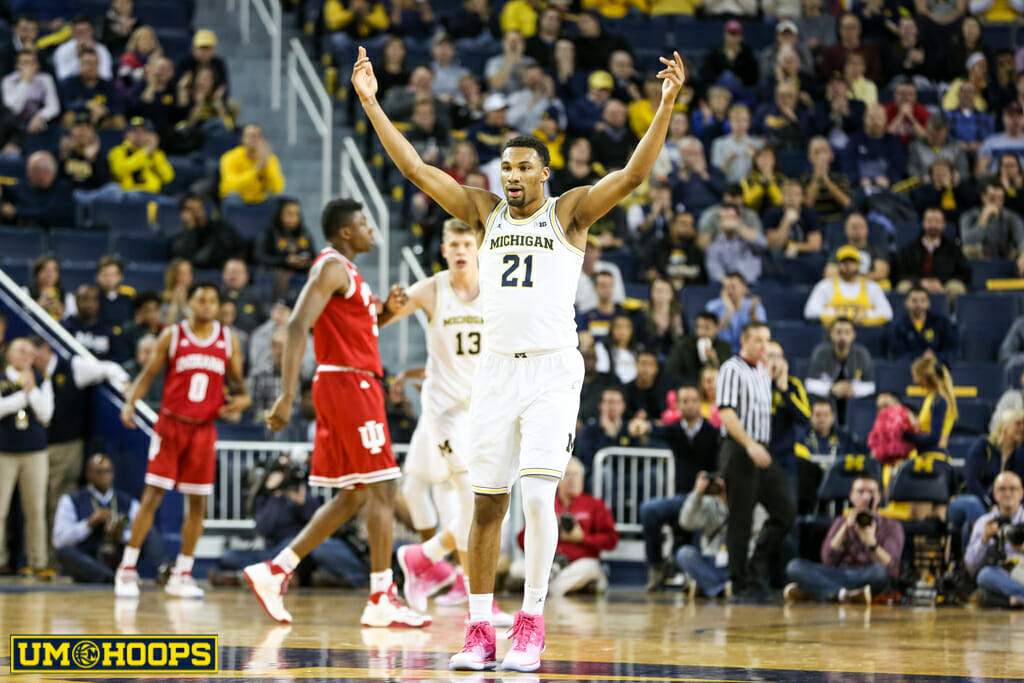 Michigan heads to Indiana hoping to get Zak Irvin back on track and win its first game on the road.

Michigan has not won a road game yet this season. That’s noteworthy as the Wolverines try to improve their résumé in the eyes of the NCAA Tournament selection committee, but not preposterous for a 15-9 team. Winning on the road is more difficult in college basketball than in any other sport. As ESPN analyst Dan Dakich (father of Michigan’s Andrew Dakich) likes to say, a coach’s three most memorable days are his wedding, the birth of his children, and whenever he gets a road victory.

Dylan pointed out that Michigan is 1-16 in its last 17 games at Assembly Hall, with the lone win coming in 2009 against an Indiana team that won just one Big Ten game. Anyone who’s been to Assembly Hall talks about the atmosphere and how loud it can get. Even with the Hoosiers having lost four of their last five, expect a rowdy crowd for Michigan’s visit on Sunday.

“For the most part it’s just mumbo jumbo, just an absurd amount of noise,” Derrick Walton said. “Those fans are really passionate.”

Most any road game is tough. John Beilein said at the high-Division I level it’s not about the travel itself. “We’re going to go in a beautiful plane, we’re going to be there in an hour,” he said. “We’re going to stay in a great hotel and the meals are incredible.” The noise is a factor.

“When there are 18 to 20,000 people yelling at you when you’re trying to run stuff, it’s not easy. It’s not even easy to coach. You’re trying to get your stuff together and people are screaming at you.”

Walton pointed out little things, too, like “getting used to the court, getting used to the rims. I don’t know why, but every team uses a different ball. … Some guys being there for the first time, sometimes not even having a shoot-around. Trying to get the depth of gym, the bounce of the ball, the dead spots (on the court) if there are any.”

All these factors are real, but Michigan has overcome them to at least be tied in the second half of games at UCLA, Iowa, Wisconsin, and Michigan State. Can Michigan put itself in a position to finish the job on Sunday and then actually do it?

Getting Zak on track

Beilein pulled out some chairs for Walton, Zak Irvin, and Muhammad-Ali Abdur-Rahkman on Wednesday. His instructions to the three veteran starters: “No shots, no nothing, get off your feet.” Beilein is especially hopeful the rest will have a positive impact on Irvin, who has struggled mightily in Michigan’s last three games (eight points total). Irvin had the flu prior to the game at Michigan State and hasn’t been himself since.

“I didn’t see him have the bounce at all and I think he’s just tired,” Beilein said.

When asked to come up with reasons for his recent struggles, Irvin gave some credit to how teams have guarded him and acknowledged that fatigue was a factor, if not the biggest one. “I just really think the main thing is mental. I’ve just got to stay positive and play my game and be comfortable and relaxed out there.”

It’s a rare place for the ultra-confident Irvin. His last productive offensive performance came in Michigan’s 30-point win over Indiana on Jan. 26, and perhaps the rematch is just what he needs. The Fishers, Indiana, native is certainly pumped to play the Hoosiers, though he doesn’t expect to be over-excited.

While Irvin has been slowed lately, Abdur-Rahkman has elevated his play. He locked down James Blackmon in Michigan’s last meeting with Indiana and after some foul trouble in East Lansing, bounced back with aggressive performances the last two games.

Earlier this season, the coaches encouraged Abdur-Rahkman to improve his assertiveness and his practice habits. The junior guard has taken it to heart these past few weeks.

“He’s just taken that next step to work even harder,” Beilein said, emphasizing that every player gives good effort, but sometimes there is just a little bit extra that can make a difference. “Good is the enemy of great. And that’s common with many of our team members. They will have some success and then let back. With (Abdur-Rahkman) and most young men, that is a common enemy.”

If you’re wondering why Abdur-Rahkman, or any player, can look really good for a stretch and then fade into the background, that could be why. He’s clearly playing with confidence right now. In the first half against Michigan State, he crossed over before draining three-pointer, a move he hasn’t shown much  (if at all).

“He’s got the athleticism to run by everybody, jump over people, guard people,” Beilein said. “It’s not always as easy for him (to give a little more effort) as it may be for a guy like Zack Novak, (for whom) it was the only way to survive. That’s what I think he sees right now: ‘Boy, if I apply all my God-given talents with a little bit more effort’—it’s never a bad effort, but just this really intense effort—‘I can be a better player.’”