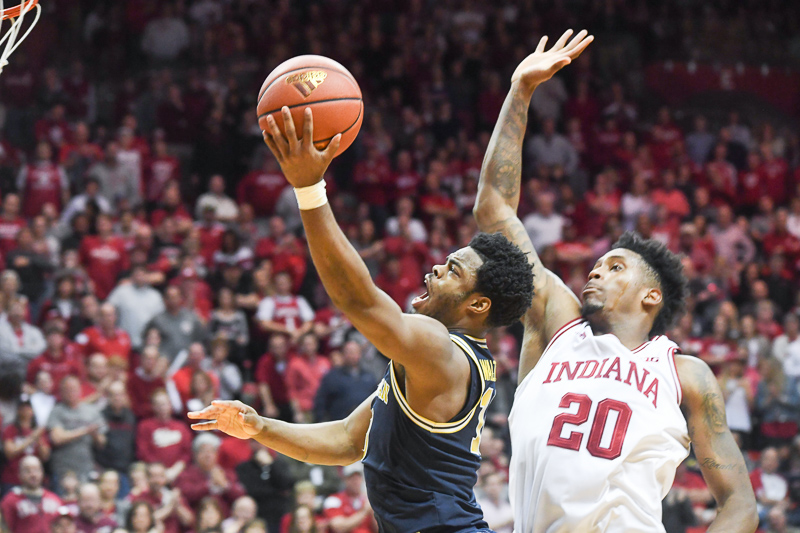 Michigan picked up its first road win of the season with a wire-to-wire victory over the Indiana Hoosiers on Sunday afternoon.

Michigan picked up its first road win of the season with a wire-to-wire victory over the Indiana Hoosiers on Sunday afternoon.

The win was the second in a row for a Wolverine team that has teetered back-and-forth on the NCAA Tournament bubble. While the game felt critical for both teams’ postseason hopes, Michigan looked to be the sharper and more engaged team from the opening jump.

Derrick Walton buried his first three-point shot of the game and led the way throughout. The Michigan senior reached 20 points for the fifth consecutive game and finished with 25 points on 13 shot attempts while getting some help from his frontcourt.

Michigan’s offense experienced a few classic road woes — the Wolverines were stuck on 35 points from 3:25 to play in the first half to 15:43 to play in the second — but in the end they managed 1.17 points per possession, a hair above their conference-leading average. This is the best offense in the conference by an increasingly impressive gap and now the 9th best offense in the country.

While the offense was efficient in both halves, the script flipped from at the break. In the first, the Wolverines missed some easy looks inside (7-of-17 on twos), but made their threes (6-of-10 on threes). In the second, the easy shots inside the arc started falling (11-of-15 on twos) while the perimeter shots went cold (2-of-12). As always, those easy twos are a barometer for the Wolverines and they were critical in the 2nd half.

Michigan’s defense got the job done once again and was the reason that Indiana was never able to come all the way back. The Wolverines held Indiana to .98 points per possession and looked prepared, engaged and active on that end of the floor. Indiana took advantage of 1-on-1 matchups in the post, but the Wolverines forced turnovers on 23% of Indiana’s possessions which led to 20 points in the other direction. Michigan has forced turnovers on at least 20% of its opponents possessions in 5 of their last 6 games and that has allowed a defense that still doesn’t force many misses to succeed.

Michigan also took away the three-point shot, holding the Hoosiers to 0-of-6 from deep in the first half and 4-of-19 for the game. Crean might disagree, but this was a good performance by the Wolverines. James Blackmon Jr. and Robert Johnson combined to score just 11 points on 4-of-14 shooting and didn’t get many quality attempts.

The last two wins have definitely righted the ship, evening Michigan’s conference record at 6-6, but there’s still plenty of work to be done. There aren’t any gimmies left on the schedule, and Michigan still needs at least three more victories to feel decent about its NCAA Tournament chances. A Thursday night win over Wisconsin would help, but beating the league’s best team is no easy feat — even at home.

Photos from Jamie Owens at Inside the Hall.