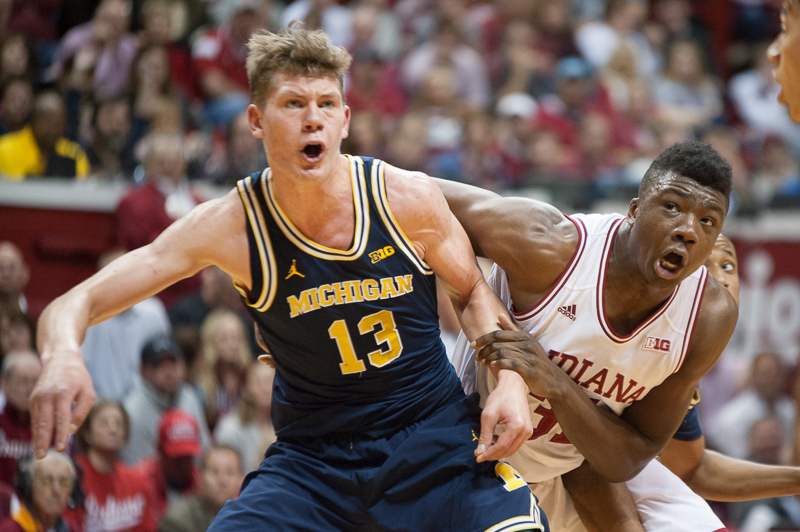 “Can’t say enough about how (our team) came and played with so much enthusiasm and so much conviction to win this game,” Beilein said. “This is a hard place for every team that’s ever played in the Big Ten to win at. And it’s so good for us to be able to come out here and get a lead, keep a lead … Our kids are really enthused about the win.”

BLOOMINGTON, IN — James Blackmon Jr. stepped into his shot and let the ball fly.

The crowd — some standing in anticipation — watched it arc into the air, before erupting as it sunk cleanly through the net.

Blackmon’s first points of the game could not have come at a better time for Indiana. After trailing throughout, the Hoosiers had watched their deficit grow to more than 10 against the visiting Michigan basketball team. Blackmon’s shot, though, was part of a quick run that cut the lead to six.

Michigan coach John Beilein, exasperated, called timeout. It seemed that he — like all who have followed the Wolverines this year — was expecting that all-too familiar run that would erase his team’s lead for good.

After all, this is a Michigan squad that had taken the term “road struggles” to new heights. No matter the venue, no matter the team, the Wolverines had lost every single time. By Sunday’s tip-off, they were the only team in the NCAA Tournament picture without a single road win.

Pauley Pavilion. The Kohl Center. The Breslin Center. All arenas where Michigan had met its doom at the hands of the host team. And while the Wolverines have certainly struggled at Wisconsin and Michigan State over the past few years, Assembly Hall has been a different type of beast.

In the previous 18 games — a span that stretched back to the mid-1990s — Michigan had won just once at Indiana, and even that lone victory didn’t feel whole as it took overtime against a team decimated by sanctions that won only one Big Ten game in Tom Crean’s first season.

So that familiar feeling — that expectation of yet another blown opportunity — crept back in as Blackmon’s shot fell and Beilein called a timeout.

Yet the collapse, however close it may have been to happening, was staved off. Out of the timeout, redshirt junior forward Duncan Robinson drained a three before redshirt sophomore forward DJ Wilson deftly laid one in at the rim, and just like that, the lead was back to 11.

For the first time this year, Michigan had the answers to every problem despite being away from the friendly confines of Crisler Center, and for that, it earned an elusive first road win.

“Can’t say enough about how (our team) came and played with so much enthusiasm and so much conviction to win this game,” Beilein said. “This is a hard place for every team that’s ever played in the Big Ten to win at. And it’s so good for us to be able to come out here and get a lead, keep a lead … Our kids are really enthused about the win.”

Added sophomore forward Moritz Wagner: “It’s great to finally have a road win. I mean, we know that we were 0-6 on the season on the road. So there (was) a certain anger on yourself — how can you say it — a certain ambition to beat a team on the road.”

What was the catalyst behind Michigan’s breakthrough?

Well, it certainly didn’t hurt that the Wolverines had beaten Indiana by 30 in the first matchup between the two teams back on Jan. 26. Michigan started off quickly in that game and stayed hot, playing stifling defense and scoring off many of Indiana’s 16 turnovers.

So the Wolverines had little to change from last time. The only noticeable difference was how they defended Thomas Bryant, doubling him whenever he received the ball in the post.

The result was similarly successful: in the rematch, Indiana scored just 63 points while turning the ball over 15 times.

“To try to minimize what they could do and take away the three, that’s hard when they’ve got both the inside game and the outside game,” Beilein said.  “Our kids did a great job. I told them, big point in the game — end of first half and start of the second half. We couldn’t score, but (Indiana) only scored two points in I don’t know how many possessions, it seemed like there was six minutes … nobody could score, and that was good. Because our defense is getting better. It had to get better. It was really bad.”

While Michigan already possessed the blueprint for a win over Indiana, the Wolverines also received a shot in the arm from last Tuesday’s 29-point romp over Michigan State. With their backs against the wall after a home loss to Ohio State, Michigan put together a rare complete performance. It was a defensive effort that showed the Wolverines the way forward —  the defense may allow the opponent to shoot near 50 percent, but it can still generate enough turnovers so that any hot shooting from the opponent doesn’t matter.

Michigan, now treading .500 in conference play, has just six games left in the regular season, of which just two (against No. 7 Wisconsin and No. 16 Purdue) are at home.

Senior guard Derrick Walton said after the game that the season “can still be special like we want it to be.” It would’ve been hard to believe him had the Wolverines lost Sunday’s game — ultimately, any team with postseason aspirations has to win on the road. And while no one will be slapping the “road warrior” label on Michigan just yet, Sunday’s win was still an important checkmark for a team squarely on the NCAA Tournament bubble.

“I think after Ohio State, we just understood that it’s not about the opponent or environment or anything else,” Wagner said. “It’s just about us. … But if we play as good as good as can, we can beat any team. That’s our mindset right now. I think it helps a lot having such a good win at home against Michigan State, and we took that momentum in here. It’s just on us to keep going like that.”