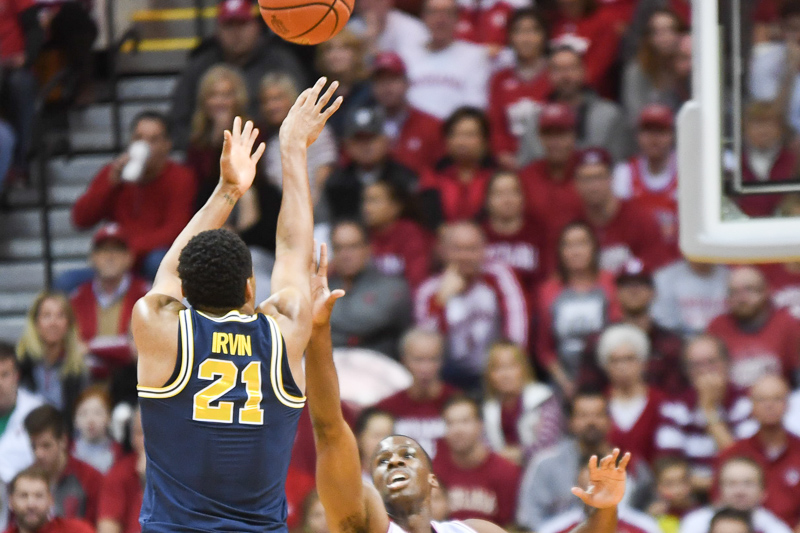 Zak Irvin has struggled throughout Big Ten play, but his numbers have bottomed out over the last four games. What’s gone wrong for the senior forward who has made just 4 of his last 31 shot attempts?

It’s no secret that Zak Irvin is struggling. He’s scored 13 points total in the last four games and has made just 4 of his last 31 shot attempts.

We know that Irvin was battling the flu in the loss in East Lansing and that he has never been the most consistent shooter, but that still doesn’t explain away one of the worst four game stretches of his career.

What’s wrong with Irvin? What can Michigan do to fix the problem? Here’s a closer look.

Irvin can’t seem to make a shot, but he isn’t taking as many either. His dip in form has coincided with Derrick Walton’s explosion and Michigan has redistributed its offense at the same time.

I can’t remember quite as dramatic of an in-season shift in offensive usage under John Beilein. Midway through the season, Irvin was the the primary option and he usage rate was increasing, then everything flipped as Walton took control.

Here’s a look at their rolling three-game averages in usage rate over the course of the season.

Walton is playing too well (50% on twos, 48% on threes, 89% on free throws) to not see an increase in usage, but this graph clearly illustrates the difference in offensive distribution over the last two or three weeks.

Irvin is taking fewer shots and I’d argue better shots of late. He’s also missing them, usually pretty badly. The shots that he usually loves — mid-range pull-up jumpers and catch-and-shoot threes — just aren’t falling at the same rate as they were earlier in the year.

Irvin has always been a tough shot taker and maker throughout much of his career, but he needs to regain some of that confidence.

Near the end of non-conference play, I broke down some of Irvin’s shooting splits and the consensus was that he was best shooting mid-range shots dribbling to his right and catch-and-shoot threes. As a refresher, here’s Irvin’s non-conference shot chart compared to his Big Ten-only shot chart courtesy of Krossover.

The percentage differences are obviously jarring, but he’s also taking roughly the same distribution of shot attempts. He’s just not making them. If you eliminated the color from both charts and focused only on where and how many shots Irvin was taking, you probably couldn’t distinguish.

Irvin posted a 64 eFG% on catch-and-shoot jumpers in non-conference play, but that number is down to just 25% eFG% in league games. He missed all four catch-and-shoot attempts on Sunday even though several were fairly good looks.

Here’s a look at back Irvin’s shot attempts vs. Indiana. He missed everything away from the rim, but for the most part it is clear why Beilein repeated on Monday that he had no problem with Irvin’s shot selection. These are some of his go-to shots: three-pointers off the catch, elbow pull-ups — we’ve seen him make them before.

His late transition three-point attempt certainly wasn’t the smartest (and it earned him a quick 30 seconds on the bench), but given the flow of the game I didn’t have a huge problem with his other attempts.

Irvin is still effective driving to the rim and finishing. He had a drive and finish through contact at Indiana and was fouled on another. The ability to drive to the hoop wasn’t always a strong suit for Irvin, but right now it is the only thing that has remained mostly effective in Big Ten play.

The bad news is that that ability has also regressed over his four game slump. Irvin has made only 2 of his last 7 shots at the rim including some frustrating misses over the last four games.

That reel isn’t all that encouraging, but those are the shots that Irvin needs to strive for. If he can get those kind of looks 4 or 5 times per game, he might be able to build a bit of confidence.

At one point I would have said that Zak Irvin without his jumpshot is worthless as a player. In the final months of his career, he’s developed to a point for that to no longer be the case.

Irvin has developed as a defender, passer and rebounder to the point where he can help the team even when his jumper is missing in action.

“We need it. For Zak to say, ‘How can I help the team?’ When the game comes, don’t press,” Beilein explained on Sunday. “Today he did on defense — great job on Robert Johnson. That’s what we need from him right now. Rebound, talk, use your experience that way, and let the other stuff come forward.”

Irvin is a better defensive option than Duncan Robinson and knows more of the offense than Xavier Simpson. He can communicate and lead, but sooner or later Michigan needs him to score too.

So what are the solutions? I’m not sure if anyone can figure out what’s going on with Irvin’s shot other than Irvin and John Beilein is convinced that the shots will start falling eventually.

“He’s just one or two shots away from changing this thing,” Beilein said after Sunday’s win. “We got to continue to look at the big data, the big body of work with him. So when you watch him shoot drills, you know nothing is broken. But he’s just got to continue to go. It could be like in baseball, this bloop single to right field that gets him off the slide. Something’s gonna happen good for him and it’s really going to help our team.”

First things first, Zak Irvin is not coming off the bench. Duncan Robinson has settled in nicely to his bench role and the last thing on earth that could fix Irvin’s struggles would be to take him out of the starting lineup when you can count the number of games remaining in his career on both hands.

That being said, Michigan has already made some adjustments. As noted above, the Wolverines are running offense through Derrick Walton, they are also playing Xavier Simpson more minutes. That hasn’t significantly cut into Irvin’s time as he’s still averaging well over 30 minutes per game, but he only played 32 in the last two contests.

What else could the Wolverines do beyond that? I’m not sure they have many more legitimate options.

You could try to give Duncan Robinson more minutes, but he’s generally been more of a comeback option. Robinson is averaging 23 minutes per game in losses and just 18 in wins. You could also stretch Xavier Simpson closer to 15 or 16 minutes per game with two point guard looks, but it’s not like there are other options on the bench.

Irvin’s versatility to play three positions (two, three and four) also makes it increasingly difficult to construct creative lineups without him on the floor. If DJ Wilson or Muhammad-Ali Abdur-Rahkman gets into foul trouble, Irvin generally slides up or down in the lineup and Robinson fills the gap.

Two point guard lineups give Beilein perhaps the most realistic option — combining any pair of Wilson, Abdur-Rahkman and Robinson at wings — but it also might be a little too early to fully invest in Xavier Simpson stock even after two strong 12 minute performances.

At the end of the day, Irvin is too important to what this team is at its core to go another direction completely. The light clicked on for Derrick Walton and at this point Michigan would probably be just fine with a flicker from Irvin down the stretch.