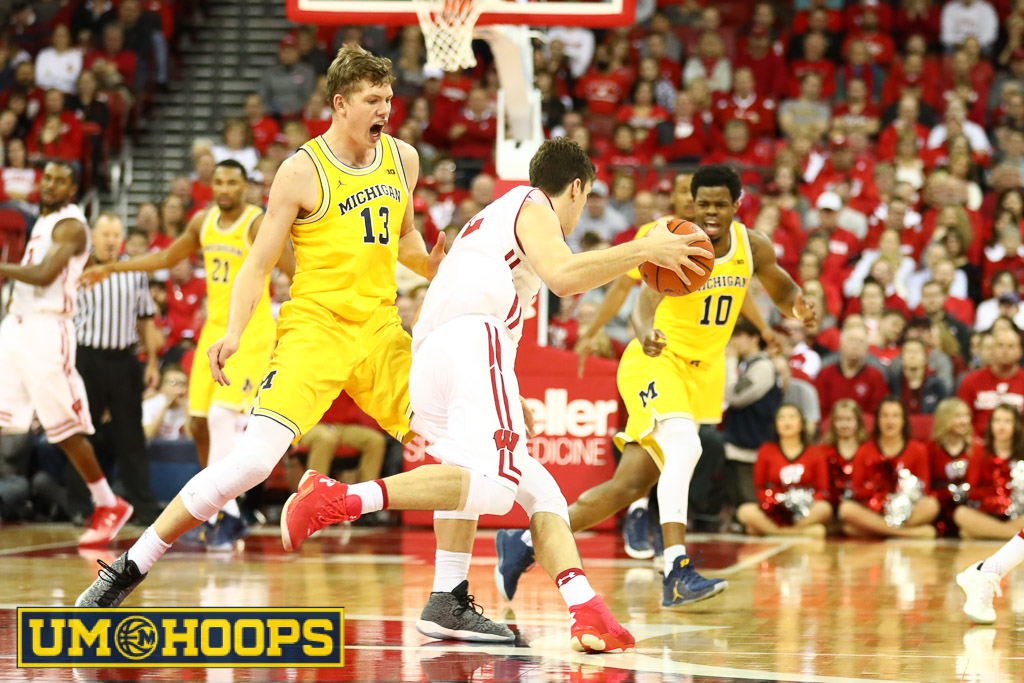 How will Michigan defend the post in its rematch with Wisconsin?

One step forward, one step back. That’s what the Big Ten season, for the most part, has been for Michigan. At times they’ve looked very good—see Indiana and Michigan State at home—and at other times they’ve been flat (at Illinois, Ohio State). At 6-6 in the league, the Wolverines will shoot for their first three-game win streak in the Big Ten when they host Wisconsin on Thursday.

Before Sunday’s win at Indiana, John Beilein said that “good is the enemy of great,” a phrase he repeated this afternoon.

“Prosperity has not been a friend to us so far this year,” he said today. “When we’ve played well, we’ve lost a little bit of that edge we need. We’ve got to come out there (against Wisconsin) with that aggression we need; that angry aggression to go and get a ‘W’.”

The challenge for any coaching staff is to get players to enjoy the success—”You can’t never smile,” Beilein said—yet still fight to improve.

“We’ve got to be consistently hungry,” Derrick Walton said. “It’s normal as a human when you have success to relish it and pretty much get comfortable.”

The players admit that is what happened earlier in the season but they are adamant it is no longer a problem. Beilein noted the team practiced very well yesterday, even coming off a big road victory. Said DJ Wilson: “We know we only have a limited amount of games left and we have to win a lot of those in order to go where we want to go. As a team we’re not comfortable.”

Despite the loss, Michigan did a good job containing Wisconsin’s Ethan Happ and Nigel Hayes in the paint in the first meeting this season. Happ shot 5 for 13 and only attempted two foul shots; Hayes was 4 for 11 (3 for 7 on two-point shots), though he did take 10 free throws. Moritz Wagner and Wilson each fouled out, but a more consistent whistle in Ann Arbor—and avoiding silly non-shooting fouls—should help there.

For the most part, Michigan played Wisconsin’s big men straight up, choosing not to double team the two capable passers for fear of allowing open threes. Northwestern, on the other hand, double-teamed Happ repeatedly on Sunday, kept the Badgers under a point per possession, and came away with a win in Madison.

Beilein is averse to tipping his hand regarding any sort of in-game strategy, but implied Michigan would try a variety of approaches for post defense.

“We analytically looked at the results of Northwestern’s doubles as opposed to ours,” he said. “I think we’ve got some options there we can utilize. Northwestern doubled off Nigel Hayes the entire game and scrambled back out of it. I think we’ve got to have a lot of ideas in our head and hopefully we’re good at all of them. Trying to put it all together is going to be a challenge. They’re a very smart team. … You’re not going to surprise them, but hopefully we can create some turnovers or create some tough twos for them to make.””

When Wagner is inevitably called for a foul tomorrow night, it will be interesting to see how he reacts. He’s often been demonstrative in his displeasure with calls. A player, especially a sophomore playing big minutes for the first time, can get a reputation with officials, and Beilein was asked if he’s talked with Wagner about that.

“I don’t want to sound like I’m being prejudiced here, but it’s very European to have a lot of drama on fouls,” Beilein said. “Whether in soccer or basketball, there’s a lot of drama. We’ve tried to scale that down. I see it that he’s trending in the right direction of just playing and not getting so emotionally upset or emotionally drunk by what happens to him in the game. He’s on the right path.”

Beilein previously coached another German, Johannes Herber, while at West Virginia, and said he was very similar: “I think it’s part of the habits they form as younger players” watching and playing basketball overseas. Given some of the whistles against Wagner this season—with Sunday’s game being a prime example—it’s not unreasonable to think his reactions have hurt his cause.

Wagner has only been whistled for 4.5 fouls per 40 minutes this year, down from 7.3 per 40 a year ago, but he still has a ways to go. He fouled out in two of Michigan’s last four games and has picked up at least 4 fouls five times in Big Ten games.