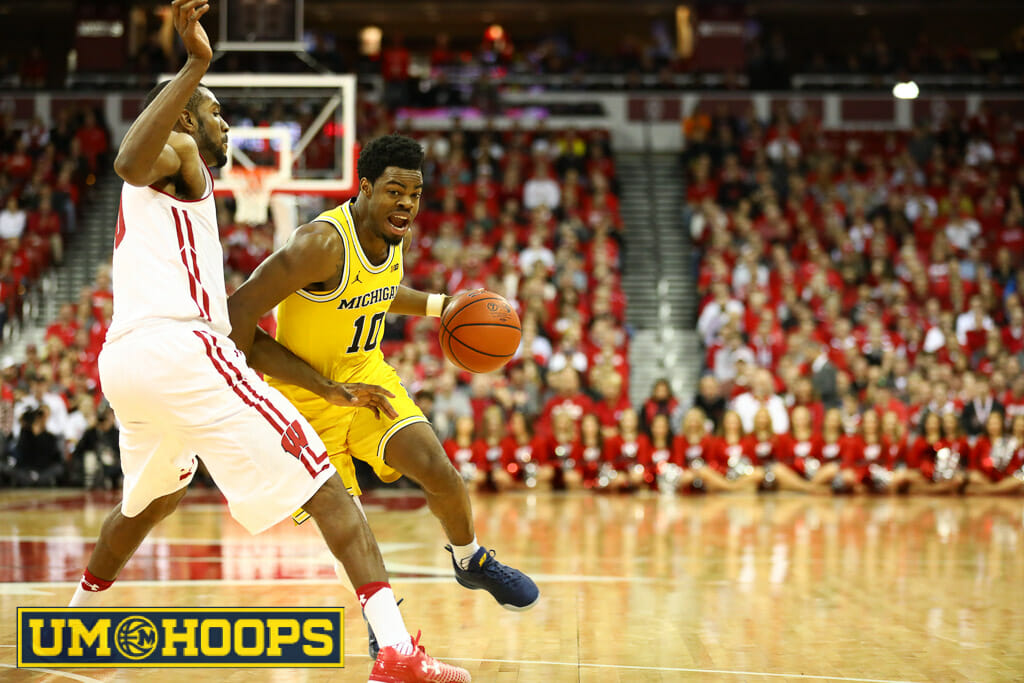 Michigan looks to pick up one of its best wins of the season as it hosts Wisconsin tonight. The Badgers will be without starting point guard Bronson Koenig, which should give the Wolverines a prime opportunity to pick up a statement win.

Michigan has the opportunity to push its conference record above .500 for the first time this season, but it’ll have to beat the conference rival that always seems to have its number.

The Wolverines are just 2-16 under John Beilein against the Badgers and they’ve seemed to invent every way to lose under the sun whether it was Brust from 46 feet, Gasser off glass, Derrick Walton’s buzzer-beater for naught.

The losses to Wisconsin have been so frustrating because time after time Michigan has been right there against the Badgers, but it just hasn’t been able to close the door on many wins. Even Beilein’s worst team had possession of the ball down by a single-point at the Kohl Center with under a minute to play.

Michigan was, once again, in position to win the first meeting this season, but a 49-43 lead turned into a 68-64 loss in typical Kohl Center fashion. The Badgers will be without star point guard Bronson Koenig tonight, but still have one of the best big men in the Big Ten.

Wisconsin is still very good at the other elements of the game — 4th in turnover rate, 3rd in offensive rebounding rate, 4th at getting to the free throw line — but it just can’t hit shots. For the conference season, The Badgers are shooting 47% on twos (9th) and 34% on threes (10th) for just a 48.6 eFG% (9th).

But Michigan will have to crack the league’s best defense. Wisconsin’s defense does three things better than anyone else in the Big Ten: defend on the interior, force turnovers and not foul. If you had to be the best at any three things on defense, those three would be pretty high on the list. The Badgers have been burned on the perimeter at times — opponents are shooting 38.8% from three — and they are just average on the defensive glass, but they have a winning defensive combo that has carried them even as the offense sputters..

Wisconsin also has the best pick-and-roll defense in the Big Ten, per Synergy, and it always seems like the Wolverines always struggle to score against the Badgers. Mid-range shots are critical to knocking off Wisconsin, just ask Bryant McIntosh, because of they funnel the ball screen. Unfortunately Michigan’s mid-range specialist, Zak Irvin, is in the midst of a 4-of-31 slump despite playing one of his best Big Ten games of the season in Madison.

Wisconsin point guard Bronson Koenig hit the big shots late versus Michigan and it feels like he hits every big shot for the Badgers, but he’s been struggling lately.

UPDATE: Bronson Koenig will not play tonight and D’Mitrik Trice will start.

Freshman point guard D’Mitrik Trice plays the backup point guard and will be pushed into the starting lineup. Trice shot 18-of-30 from three-point range in non-conference play, but he’s just 6-of-22 (27%) in Big Ten games.

Sophomore big man Ethan Happ lives around the basket and scores more points there than anyone in the league. He might catch the ball 15 or 16 feet from the basket, but he’ll use a quick crossover or back you down until he works his way there.

Michigan felt pretty good about itself after forcing Happ into a poor shooting night, but running back the film I’m guessing that Happ was probably fairly disappointed too. Northwestern doubled Happ consistently in their upset win, but that’s a high-risk high-reward move as the Wildcats gave up a number of open threes. I’d expect a mix, but think that Michigan will probably start off straight up and hope for the best.

Happ also has incredible hands defensively for a big man. He ranks 15th nationally and first in the Big Ten in steal rate and that’s something to watch against Wagner who can be very creative, but also loose with the basketball at times.

It’s crazy to think that Nigel Hayes is basically the forgotten man on the Wisconsin roster. He’s shooting 46% on twos and 23% on threes (a shot that he hasn’t attempted as often this year), but he’s still one of the best in the Big Ten at getting to the free throw line and he’s active on the offensive glass. Hayes can not only give DJ Wilson or Zak Irvin fits defensively with his ability to drive, he can also find them a quick seat on the bench with a few cheap fouls.

Vitto Brown hasn’t shot the ball great in Big Ten play — 47% on twos, 26% on threes — but he gets plenty of open looks. Volume shooters (Brown has attempted more threes than twos) with poor three-point percentages are always dangerous because they are obviously shooting for a reason and they might get hot against you (exhibit A: Jared Nickens). So do you double off of Brown and risk him getting open threes? Here’s his Big Ten shot chart, I’d say it’s a tough call.

Zak Showalter is Wisconsin’s best athlete and defender and he plays a limited role offensively but makes the shots he takes: 65% on twos, 43% on threes. He’s one of those Wisconsin role players that you forget about until he makes a couple critical plays that swing momentum in any game.

The Badgers don’t have a deep bench, but sophomore wing Khalil Iverson brings some length, athleticism and defense.

Michigan’s recent blowouts have resonated in KenPom’s metrics, which actually like Michigan by a point tonight. KenPom gives the Wolverines a 52% chance at the home victory, projecting a 64-63 win. This could finally be a chance to establish some real momentum, but what Michigan team shows up is still anyone’s guess.